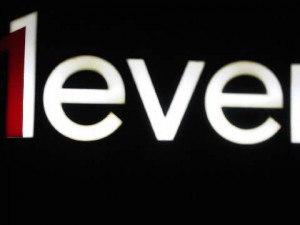 ELEVEN (or ELLEVEN) logo, atop Park Inn by Radisson, Baku

Words, or parts of words, can be misleading.  See LEVEL, gal.  This particular level is actually part of ELEVEN (or ELLEVEN, if you look at its logo).  ELEVEN is the top floor of Baku‘s Park Inn by Radisson Azerbaijan Hotel, a lifestyle fun place that one would return to again and again – and many do.

The only thing that upset my stay there was that after having persevered with the breakfast’s bread knife, a structure that looked like a violin’s bow, one length a knife cleverly set sideways so that you cannot cut more than the designated thickness, after persevering and cutting two slices of difficult-to-carve but delicious nut-filled bread, I put them in one of the two toasters.

Three minutes later, having eaten yoghurt, the fab stuff that originated in this part of the world. I returned to said toaster to find it empty.  Someone had taken my toast!  Not the hotel’s fault of course.

Salmon sushi on noodles and a fan of cucumber

Had the stylish Austrian GM, Stefan Kuehr, he who describes himself as a mountain boy, with exquisite manners (my description not his), known this he would have been down on bended knee offering more, already toasted slices on a hand-carved wooden platter (much more suitable than a silver salver).

Anyway, back to ELEVEN.  This hotel, the conjoined Siamese twin of that other Baku Boulevard-set luxury hotel, Hilton Baku, has the same kind of elevators.  Punch in the floor you want and you get, on the screen, A, B or C.  At six every evening C elevator acquires a desk and strong male bouncer at lobby level, and that elevator is out of action for mere hotel guests.

C is dedicated to ELEVEN, a location that most hotel guests do not know anything about.  It does not appear in any literature in the 248 well-thought-out and ergonomic bedrooms. Rise to ELEVEN and you are in another world.

This is a rooftop destination with a 20-foot bar, and enough dining tables to seat about 80. One end is all comfy lounge seating, for about another 100.  In between dining and lounging is the podium, where singer Dilara Kazimova and her group will perform.

Right now, 1900, most of the dining tables are taken, with groups of men in the 35 to 55 age group, talking and drinking, mojitos and foreign wines (my request for a glass of Azeri wine, perhaps a Caspian Coast Pinot Noir, initially meets with blank amazement – up here, the diners prefer, say, Ch Lafite or possibly Cristal).

The menu is Japanese, prepared exquisitely by a Filipino whom the hotel’s owner – like the Hilton, it is commodities, LUKOIL, ship-owning and Toyota-Lexus entrepreneur Khalilov Iskander of ISR Group – saw cooking somewhere.

Apparently he made an offer Mr Manila could not refuse, and thank goodness he did accept.  Iskander even built a kitchen up here for him.  Every evening he prepares dishes that the locals, and this mere visitor, love.  Yes, there was yet more salmon.

Salmonfacts.org says salmon’s Omega-3 content is 1.9 grams per serving compared with 0.6 grams for swordfish and yellowfin tuna’s 0.2 grams.  After a few days in beautiful Baku, where you even find smoked salmon on the typically-lavish breakfast buffets, your heart is going to live for evermore.

Night view across from room 402 to Park Bulvar shopping mall...

Of course I start with a dish of salmon sushi, and go on to light-tasty prawn tempura.  Main courses are limited to three or four, grill types.  My fish steak, not salmon, is white and bright, with white rice and a whole, skinned tomato.

We talk about how Park Inn came to be here, way back in 1995 (apparently the brand’s supreme leader Kurt Ritter and his wife Lara met Iskander somewhere), and how for 15 years Park Inn had no competition, other than the fabulous Hyatt complex with its amazing Oasis Club fitness facility.

Then new hotels were conceived and born.  How did onsite leader Stefan Kuehr react?  He lowered his room rates by ten percent.  How did the market react? Number of staying guests went up 20 percent.

..and morning view along to distant Flame Towers

Back up in corner room 402, I looked out across Neftchilar Street at the shopping complex Park Bulvar, anchored by Debenham’s and United Colours of Benetton. Yes, come to Baku, obviously a new hot destination, for great shopping.  I momentarily wonder why the hotel’s hard-mail address is  Azadliq Avenue, since that is at the far end of the block, at right angles to it (an Iskander whim, apparently, I am told later).

Anyway, even at 2200 there was a stream of cars waiting to get into the carpark.  Wonder what time it closes… never mind.  A young lady needs her beauty sleep.  In the morning, I look out, to the right of my room.  I see a building being renovated, in the ubiquitous style of all old Baku city-centre treasures.  In the distance I can see one of the three Flame Towers buildings that are on the diary for tomorrow. 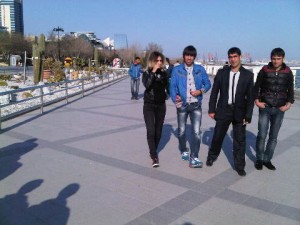 Locals stroll the Boulevard by the Caspian

Time for an early morning jog along the Boulevard.  Locals have been out since before dawn, pushing babies in buggies, running or walking. The women, of course, are always (except for running) in highest-possible heels – all the publicity for the forthcoming Under-17s Women’s Football, by FIFA, coming here late September, shows a high-high stiletto with sole studs.

I pass the obviously-new cactus garden that attracts a lot of local attention.  And then, showered and titivated, it is down to Park Inn’s copious breakfast, and my delicious toast.