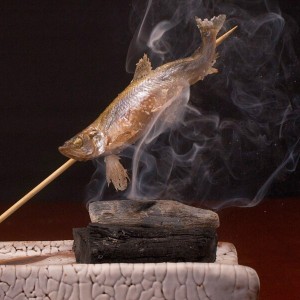 Fish on a dish at MEGU Midtown, New York

On May 7th, 2012, a big dinner will be held at MEGU Midtown, for a presentation of superlative quality from The American Academy of Hospitality Sciences, led by its founder Joe Cinque and his superlative right-hand man, Karen Dixon.

The guests will include Donald Trump, who owns the building that the luxury restaurant is in, and Anne Hathaway, one of the many MEGU-addicts from the entertainment world.

As you will have already read, the gal also enjoyed a ‘big’ dinner at MEGU Midtown, thanks to gregarious host Koichi Yokoyama, boss of the MEGU brand.

This is so good, Koichi-san.  Why not have a MEGU Hotel?  After all, with such new brands as Aloft, Edition, Public and Tune, the word MEGU would be abnormally normal for a new luxury hotel.

One can imagine it now, with sensational rooms by Glamorous designer Morita Yasumichi who, as he has done here at MEGU Midtown, makes full use of memorable textures (he has a lot in common with Alexandra Champalimaud, here).

A kobe steak is flambéed tableside, with Hennessy no less

What to drink with all this?  MEGU Midtown is a winner of a Wine Spectator award – it has more than 60 types of sake, served hot or cold in black ceramic pitchers.  It also has ten times that number of wine labels.

Order a glass of Pinot Noir and they suggest a New York State 2002-vintage wine, from Ravines, a 170-acre estate at the widest part of Keuka Lake, one of the Finger Lakes (it is owned by Morten Hallgren, born and bred at Domaine de Castel Roubine, in southern France, and his foodie wife Lisa).

Interestingly, MEGU offers a ‘drinks package’.  There are three categories, culminating in the Deluxe Top Shelf Bar.  Pay $40 per person for the first hour’s drinking, with a further $25 for each additional hour (or $590 per person if you stay three hours, which to my simple-mathematical brain means it makes good economic sense to stop ordering after two hours!).

For this you get every top liquor you can think of, including Bombay Sapphire and Tanqueray and a range of Grey Goose vodkas, plus two signature cocktails, plus Classic Saketini sake cocktail.

Add to this Chardonnay, Pinot Noir and I-Chilled Sake, and Asahi and Kirin and other beers – and Diet Coke and juices.  If you want to have sakes explained, add $30 per person to a three-hour drinking package.

But the connoisseur comes to MEGU for the food, and the meal continues.  At some point there is cooked eel with cod roe on top. There are baby eggshells, set upright, filled with egg custard and foie gras.  Having started with vertical asparagus lollipops we have horizontal seaweed-bound eggplant lollipops.

A giant bit of kobe (wagyu) fillet is seared over a hot stone grill and flambéed with Hennessy – this goes with miso cod, and a side of sautéed spinach with walnuts.  We are told that the MEGU restaurant at The Pearl, Doha, has a challenge.  No alcohol is allowed, the recipe must be modified.

The penultimate course, believe it or not, is back-to-the-oceans, for a long tray of sushi and wrapped rolls.  Now for a lesson, Koichi Yokoyama, on tuna.  He shows Akami, which is lean, and Soy-marinated Akami.  Next, he suggests, eat Chu Toro, which is medium-fatty.  Now for the orgasmic bit (sorry, guys, that word again, but justified), Oh Toro, which is fatty tuna. 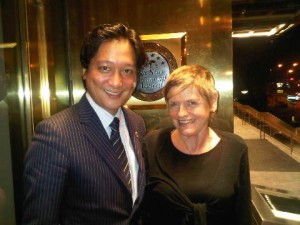 And finally to dessert, which is so incredible and utterly edible that it rises to be eulogistic.  It is a slice, each, of a pale green cake, formed of no less than 22 paper-thin pancakes sandwiched with green tea mousse.  Yes, there are also fruits but really, this green tea thing is incredibly, edibly, deliciously decadent.

After that, it is time, following a three-hour gourmet introduction to heaven, to say goodbye.  I walk away, feeling light as air, back to the world of reality and luxury hotels. MEGU Restaurants‘ boss Koichi Yokoyama is there to farewell us off the premises, and please come back soon (which, for one young lady at least, cannot be soon enough, though she may well eat at MEGU New Delhi before then).