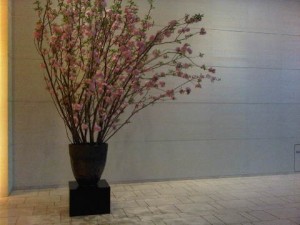 There is still some cherry blossom left in Japan – just.  Wonder, by the way, how the centennial cherry blossom festival went in Washington DC, commemorating the trees that, against all odds, were sent over to the capital of the USA?

Here are some blossoms in the lower lobby of the Ritz-Carlton, Tokyo, a soaring 248-room hotel on the 45-54 floors of the 54-floor Mitsui Fudosan building that dominates Tokyo Midtown, in the Roppongi district. 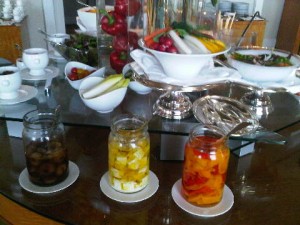 The gal arrived, was given a pink bouquet in pink paper (and, being Ritz-Carlton, there was a vase already waiting in corner room 5232, and the vase was the right size and there was water already in it).

And being Ritz-Carlton, laid out on the desk were all the things I needed, and yet it was four and a half years since my last visit: here was an extension cord with sockets, spare adaptors, scissors and a stack of elastic bands.

I have a friend who adventure-cruises a lot and she says you can never have enough plastic bags and elastic bands.  They come in handy for so many things…  but hotels have given up putting towel robes in plastic bags.

Water selection in the club lounge

Eleven years ago in Petra, members of the Zuzu private members’ club was caught in a snowstorm.  Thank goodness the Mövenpick Petra still then put its robes in plastic.

Claire Pérès, wife of the President of Mövenpick Hotels & Resorts, Jean-Gab(riel) Pérès, took off a bag, enlarged the clothes-hanger-hole at the top, stuck her head through it and, arms confined inside the bag, was able to wander around the glorious ruins in the summer clothes that were all any of us had with us.

Back to the luxury hotel that is Ritz-Carlton Tokyo. I rush up to the 53rd floor club lounge, where  charming Yoshikazu Katori was on duty – he bows deeply as you go in. 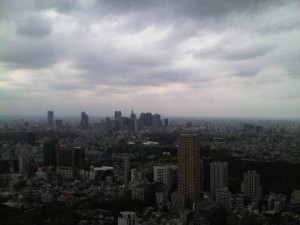 Ritz knows that its club room consumers like to eat day-long, not only at breakfast.  Here, the lunch set out had lots of bite-sized snacks crudités and salads, and jars of tofu and pickles, and small and elegant floral-edged Wedgwood china.

A good-looking first… four carafes of water, silver-topped of course.  One is plain water, the pink is flavoured with hibiscus and rosehip, the green with jasmine and green tea, and the brown with Earl Grey tea.  Ah colour.

You can borrow a pale pistachio-coloured bike to pedal around Roppongi. The bike, of course, is designer, a Bianchi, from the firm started in Milan in 1885 by a 21-year old medical instrument maker called Edoardo Bianchi. The bikes’ colours are technically Celeste, a turquoise sometimes called ‘Bianchi green’, supposedly the colour of the Milan sky. 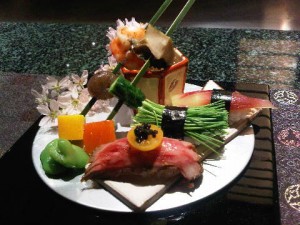 Starter plate, with a pair of skewered morsels and, on right three sushi

Ah water, there is lots of it in the hotel.  The 45th floor lobby (you rise up from the ground in the world’s fastest elevators), has a two inch deep decorative pool fed by a ceiling-high rippling-stone waterfall, and after gazing at this you may be lucky enough to coincide with teatime geisha lessons.

After working out in the big gym, I was lucky enough to be escorted along to a room where a young lady did a brilliant back massage and I slept like a baby.  It was then tempting to celebrate the hotel’s fifth birthday with a yen 5,555 glass of Dom Pérignon and fabulous (free) canapés, but there was no time.

Up in my room (the smallest room here is 600 sq ft but my corner area must be double that) I look out, and helped by a Fuji-sponsored annotated map of the skyline standing on one of the window sills, I can identify Shinjuku and much more.

The stated hour had arrived for dinner, in Hirokizaka, which has a Michelin star.  We sat up at the tall L-shaped counter as a chef produced his magic, just for us.

The genius the other side of the counter got an enormous langoustine.  He fried the main body of it and put it to one side (to be served on salad). He took the shell and antennae and pounded them hard hard until he had a paper-thick flat mass, which he seasoned and cooked.  This was later served, with other delicacies – osteoporosis, no room for you here when the meal includes so much bone matter.

Crisp-fried garlic flakes, served as-is as accompaniments, and then, to end the meal, blended with fried rice

We had beef, your choice or fillet or sirloin, skilfully cooked-and-served in bite-sized portions.  In between all this there was a seemingly never-ending supply of fried garlic chips.  And we finished with all the left-over garlic chips rolled into fried sticky rice…

What can one say?  Eat in Japan and one is never disappointed, never too full.