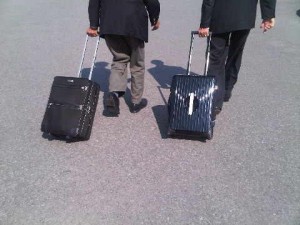 The Porsche Rimowa arrives in Russia, with a companion

The suitcase was taken away from the gal when she arrived in St Petersburg, Russia. Met by a shaven-headed driver from Orient-Express‘ Grand Hotel Europe, she was allowed to walk by herself, following, as if in harem style, an advance guard of wheelie bags.

She had been first through immigration, ahead others in the forward cabin of British Airways’ full flight from London Heathrow.  Who else was on that flight?  Well, there was Sir Rocco Forte, who seemed to know half the cabin.

Quietly keeping his head down in seat 1-A was Prince Michael of Kent, who spends a lot of time in Russia (he is a business associate of Boris Berezovsky, who is exiled in London). Two rows behind was top international conductor Valery Gergiev, who conducted at the Barbican last night and tonight he was to do Swan Lake at the Mariinsky, where he is Director.

He also heads the city’s White Nights Festival, plus, inter alia, he is Principal Conductor of the Rotterdam Philharmonic and Principal Guest Conductor of New York’s Metropolitan Opera..  Somewhere nearby was ‘The History Boys’ star Richard Griffiths.  Want to be surrounded by VIPs? Fly British Airways… 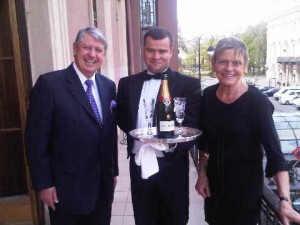 And then, under an hour later (miraculous in the sometimes-snarled St Petersburg traffic), the BMW-7 Series, one of the hotel’s ten-strong fleet, purred into the tight turning circle of Grand Hotel Europe, one of the world’s leading iconic hotels with a façade that dates back to 1875.  Yes, 137 years old this year, girl.

The lovely Aussie GM, Leon Larkin, who has seen more than a thing or two in his years working in China, Finland and Ukraine as well as here in Russia, opened a bottle of Bollinger to celebrate the lovely summer weather.

We stood outside, on the Vidval room’s balcony overlooking Mikhailovskaya Ulitsa, above the 301-room hotel’s main door. Turn to our right, and the hotel stretches to famous Nevsky Prospekt.  Turn to our left and the hotel reaches all the way to Arts Square, with its Pushkin Monument. 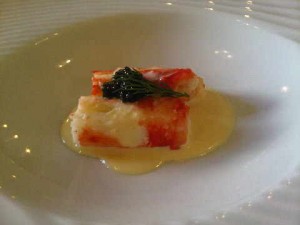 Larkin is hosting 800 of his friends, global lawyers, here to dine tonight as part of the meeting of the Petersburg Legal Forum.  He also, before they arrive, has time to have a little supper with us, in the quiet Museum Room leading off the Lidval Room, named for the Russo-Swedish architect Fyodor Lidval, who worked on the Art Nouveau part of this hotel.

Our table is ready, and set immaculately, with big flowers, printed scroll-type menus rolled in red ribbon, and red flowers.  The conversation flows, nonstop, with tales of Russia in the old days. The first time I visited Soviet territory was on a ship as part of my honeymoon, Piraeus around the Black Sea and on to Alexandria and Beirut.

Around the Black Sea it was ‘domestic waters’ and we had delicious black bread and smetana sour cream, but no toilet paper in the cabins. Back through the Bosphorus to the Eastern Mediterranean, we became international.  Bread was all white, and we had toilet rolls.

Tonight, we start with an amuse of king crab with oscietra… Now you can get absolutely everything here, even US beef, but not always consistently.  In the hotel’s more casual restaurants they are thinking of replacing printed menus by iPads to accommodate sudden changes. 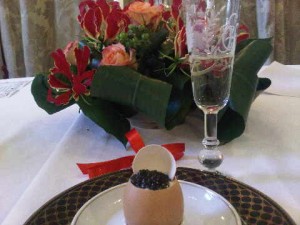 Our dinner’s eggs are magnificent. I wonder briefly if Valery Gergiev has time for anything, let alone an egg like this, before rushing for the overture at the Mariinsky, only five minutes’ from here.  This place is so convenient – only ten minutes’ walk to the Hermitage, and less than that to the inland canal and river network that is such a delight (the hotel has its own 37-year old cherry-wood launch, the Katarina, for spectacular tours around town, summer-time only). 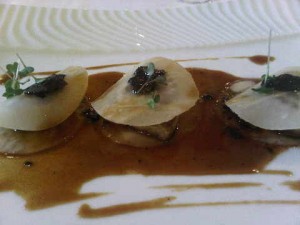 What looks like ravioli in fact are celeriac slices atop foie gras...

The hotel actually has nearly everything.  Shopping includes a branch of Mercury art, and an icon store run by 83-year old Ivanovna Khatchaturian, who keeps her energy up by two-week trips first to spa in Karlsbad and, on a separate trip, for the sun of the Red Sea.

The only thing it is missing at the moment is an indoor pool that is now in the budget, and it should be up and running, or rather swimming, by 2014 (Adam Tihany is doing a hotel refurbishment, starting November 2012, and the Japanese super-designers Super Potato are redoing a couple of the restaurants).  Meanwhile, keep fit with the 24-hour gym, and outdoor jogs and walks. 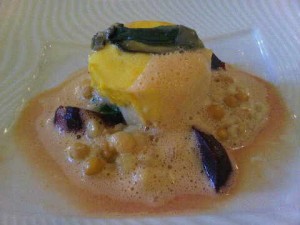 Cod, St Petersburg style, with scallop mousse atop, and surrounded by macadamia nuts

The meal continues, with celeriac ‘ravioli’ with foie gras, and then cod for me, and US beef for the others, and, for us all, 2010 Gaja Rossi-Bass Chardonnay Piedmont and 2007 Ch du Pape Les Sinards Perrin & Fils.  We hear about New Year’s.  Last year Marco Alban created the celeriac ‘ravioli’ specially for that night, and it was such a success it is now on the general menu.

This year’s New Year’s is already sold out, $800 a head, bedroom extra, or $1,000 if you want an exclusive-room dinner.  This is the place top Russians come, year-round.  They do not like minimalism, I am told (no taupe bedrooms for them!).  Parked outside in Mikhailovskaya Ulitsa is the most tasteless Rolls-Royce imaginable.

It is bright royal blue, with a giant stainless band, about a yard wide, separating its bonnet (hood) into two.  Parked across it, in front, is a black minivan with blackened windows.  Start approaching the most-tasteless-RR-ever and out of the black beastie pops a guy, black hair, black suit, black shades, Niet Niet, go away, now… 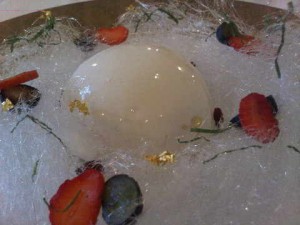 No, not a hat for Ascot, Chantilly or Melborne, but a bombe on a spun sugar bed

We admire, dip into and eat in its entirety, the dessert, a light-light bombe on a bed of sugar art.  There is still plenty of the evening to come. From the first floor it is 38 stairs down the hotel’s 1875-vintage ten foot-wide stone staircase, now carpeted, to the ground floor.

The 800 lawyers are pouring past like water out of a tap, only turned through 90 degrees… among them is the UK former Chancellor of the Exchequer and Secretary of State for Justice, Ken Clarke, also the nation’s smoking champion, cigarettes rather than salmon, talking 19 to the dozen.  They have all been listening to President-turned-Prime Minister Dmitry Medvedev and now, finally, it is their turn to dine. Grand Hotel Europe’s many restaurants have been turned into one giant buffet, and it will go on for hours…