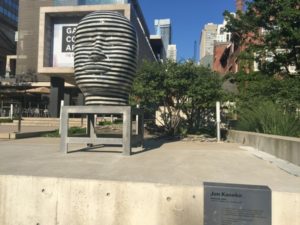 Hani at The Hazelton sounds more like Dale Chihuly at the Royal Ontario Museum – which is where, actually, the glass artist IS currently exhibiting – than a serious hotelier running a highly successful luxury hotel. In fact the gal was in an art mood even before arriving at Toronto’s Hazelton Hotel. Ten minutes away, south on Avenue Road, is a striped Jun Kaneko head, a smaller version of the pair that grace the lobby of Grand Hyatt Tokyo. And at the hotel, there is art in so many places (see a main lobby sculpture, above): the designer throughout, here, is Yabu Pushelberg. 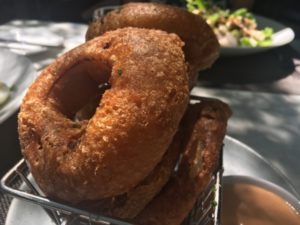 Hani Roustom has only been in charge of this special 77-room hotel for a few months and one of he first things he did was to enable his lovely team to work even more closely with colleagues who run all the food side. These are employed by, and managed by, a local restaurateur, Mark McEwan, who handles not only One Restaurant but room service and meetings. It is now one big seamless operation, which must make the hotel’s owners, accountant Peter Cohen and lawyer Bruce Greenberg, very happy. Their joy must be intensified during summer, when One Restaurant flows out on to the pavement, which adds people-watching to the overall eating fun. 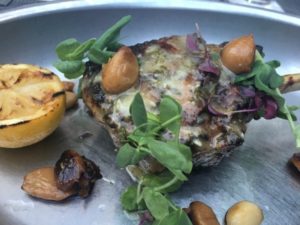 A delicious, and hearty, meal for a growing girl

I loved all three meals here. At lunch, I must admit, the highlight were the onion rings, not served suspended from a pipe, as at Gordon Ramsay’s Bistro at InterContinental Le Grand in Bordeaux but in this dinky little wire basket, as shown. This time, incidentally, amazing self-discipline meant I only ate one, not all five as in France…. The highlights at dinner were a 14-ounce bone-in milk-fed Ontario veal chop, with the hotel’s own-label Elevation 2014 Bo-Teek Cabernet Franc, from winemaker Brian Schmidt Ong. At breakfast, it was tempting to try an Isobolic shake, which apparently contains premium muscle-building blocks to repair tired tissue. 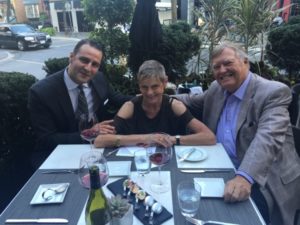 Breakfast also offered a Black Forest French toast, which surely could have launched a new Franco-German entente cordiale were it not complemented by Ontario sour cream compôte and vanilla-flavoured crème anglaise, plus, for good measure, chocolate pastry cream and honey. There are good things at every meal here, and it is not surprising that Klaus Tenter, who helped Peter Cohen and Bruce Greenberg set up their luxury hotel, often dines here when he is in town. As I left for the airport I went passed another ‘memory of The Hazelton’, two sculptures that look like shiny stainless cabin trunks piled high atop each other. Yes, this is indeed a hotel that titillates all the senses of style – now I must try and return to coincide with the annual Toronto Jazz Festival end June and early August.  SEE THE VIDEO BELOW