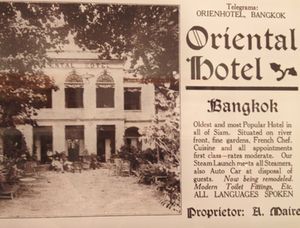 Brand baggage, in the form of history, is used to perfection by such fashion greats as Chanel, Dior and Versace (though Tom Ford is building his history, fast). It is the same with cars – think Rolls-Royce, conceived by Mr Rolls and Mr Royce in what was then The Midland Hotel, Manchester, England, in 1904. And, says the gal, the history game in Bangkok’s luxury hotel corner is dominated by The Oriental, as it was when it was opened in 1876, on the banks of the Chao Phraya River. Read this icon’s history, in the upper gallery of the Authors’ Lounge. 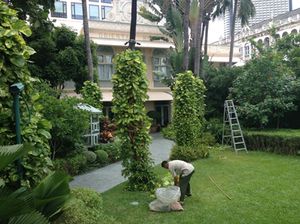 The Lounge, in the 1887 building put up by a Dane, Captain Hans Niels Andersen, becomes a peaceful tourist-free haven by the evening, offering a Champagne reading area for guests of what is now the 396-room Mandarin Oriental Hotel Bangkok. Take your glass of Pommery upstairs to the aforementioned gallery. A poster of Anna Harriette Leonowens (Anna of ‘The King and I’) is followed by one of her son Louis, who lived in the hotel as agent for the Borneo Company. There is a list of General Managers, including the longest-serving – so far! – Kurt Wachtveitl, 1967-2009, and four women, Mesdames M.O. Bujauff 1906-1910, A.J. Maire 1910-1924, Germaine Krull 1946-1960, and the current chatelaine, A. Hyndman. 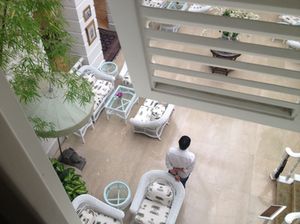 Looking down, from the history gallery, to the Authors’ Lounge

Amanda Hyndman oversees a ‘team of colleagues’ that numbers 1,300, some of whom have been there so long they must have rubber joints. I exit the elevator on the 14th floor, to go along to 1412, named in honour of one of the countless famous past guests, Graham Greene, and butler Piyathep Yordkorn miraculous appears from nowhere, literally ducks limbo-style under my arm as he runs along the eau-de-nil carpeting to my matching door, putting his key in before I can get there. When they sweep leaves off lawns, it is as if an electric suction pump has been over. 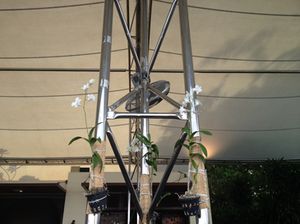 They love minutiae. I love to eat outside. Dinner is at Ciao, a fabulous Italian spot with a fabulous Venetian chef, Luca Casini, who produces whole burrata with ox-heart tomatoes and wild arugula, and Levoni salami and cheese from Luigi Guffanti, who has been going at it three years longer than the hotel… Luca Casini, by the way, is one of the dancing stars in the two-minute Happy video that Amanda Hyndman sent out to her hundred most loyal guests, worldwide, on July 11th, 2014. Do not miss it on YouTube, and pass it on, to spread the word that Bangkok has never been more welcoming… come and join 898 others here at New Year, for instance, but do not be late because by six o’clock on the morning of 1/1/2015 every distorted blade of grass is vertical again. 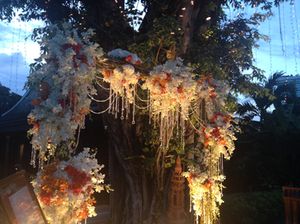 Orchids galore, and illumination, for a wedding arch

I am back outside by six, certainly, for the first shuttle across the river to the gym – fruit skewer and water, cold or not? as I leave. And it is breakfast outside, under a big awning, its poles decorated, oh so Thai. Since I am by myself, my table’s small flower display is replaced by a giant vase of orchids. Is this for company or, like The Queen, so nobody can see my mouth open? They must use entire acres of flowers here. Wedding guests last night arrived through an illuminated arch. There are streamers of threaded purple blossom hanging in the shuttle boats, which are crewed, at times, by a husband and wife. He sits still, steering and trying to avoid the juggernaut barges that progress up and down the river. She, at both sides of the river, leaps out to secure the holding rope, helps disembarking passengers off and embarking passengers on (this must be almost as good exercise as a sensational abdominal stretch class I took, for free, me and a personal trainer and a very powerful elastic band, purple to match all these flowers). 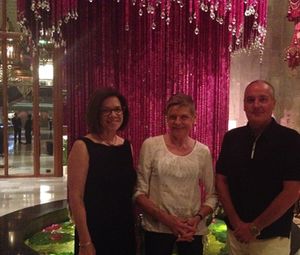 The conceptual floral art in the main lobby is currently purple, too. Three thousand flowers have been minutely threaded, as they were 18 months ago. That, now this, arrangement was, is, so popular that it has been brought back to general acclaim. This art, designed by a former engineer called Sakul Intakul who now also does Royal Palaces, is changed every three months, and people come specially to see it. Amanda Hyndman knows it by heart – the GM of this luxury hotel makes a point of standing by it, every evening for an hour from 6.30, to talk to her guests.