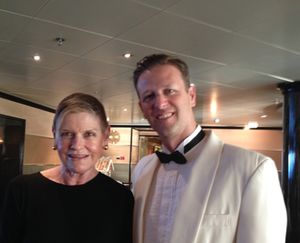 It is always good to know that you have a capable Captain aboard your luxury cruise ship, and here on Silver Shadow we have one of the best, Captain Alessandro Zanello. He happens to be travelling with two of the most beautiful gals on the ship, his wife and their three month-old daughter.

Alessandro Zanello is half Italian and half Australian (from his name you can tell his mother is the Ozzie). His wife is half Guayanan and half Canadian – she was a singer on one of the ships and she is dead-gorgeous, a real fashion plate with turquoise toenails. Their daughter was born in Toronto and was taken for a walk in bracing Ontario air at age two hours.  What a family. Yes, you meet fascinating people on board a LUXURY cruise ship – whereas in a luxury hotel you never know who the other guests are, unless, say, it happens to be Mikhail Khodorkovsky, who chose well by using the Adlon Kempinski as his temporary base when he arrived in Berlin.