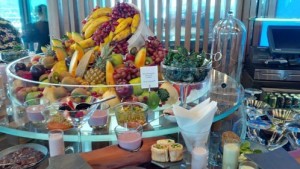 Breakfast in top city-centre locations has found its theatre. The mass head for Starbuck’s to pick up a paper carton of something hot, which is jolly wasteful as the beverage costs quite a lot and most of it will quite possibly be thrown away. Those who have early meetings, however, may head for a luxury hotel, say Loews Regency New York or Mandarin Oriental New York – stunning view, down over Columbus Circle and Central Park. In London, former M&S boss Stuart Rose almost has his own personal breakfast table at Claridge’s (wonder if he will still go now that wonderful GM Thomas Kochs – he who starred in the highly-successful behind-the-scenes television series – is no longer there?). In Hong Kong, try Island Shangri-La‘s sky-high Petrus, and Park Hyatt Shanghai‘s 87th floor Dining Room gives similar above-the-cloud views, says the gal. 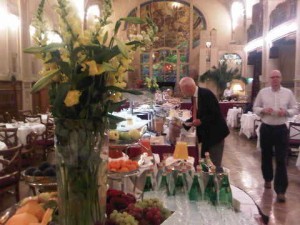 One of the most memorable breakfast meetings I recall was in Dubai, at Madinat Jumeirah‘s Pier Chic, the ultimate over-the-water restaurant in that you walk, or buggy, 200 yards along a raised boardwalk to the wooden space, also rising up out of the sea. The restaurant offers a fitness breakfast from its Talise Spa. What a way to start the day. Another unforgettable opener is at Belmond Grand Hotel Europe, St Petersburg. There you walk just a few steps into an incredibly imposing hall with ceiling-high stained glass at the far end, and a lady harpist plays. The buffet groans under copious offerings of masses of marinated and smoked fish, and cheeses and smetana and other yoghurt types, and fruits and more. One, now sadly departed, oligarch came in daily, by himself, and started with half a pint of beetroot juice and seven cross-cuts of watermelon – he went on to yoghurts, cheeses and then salads. 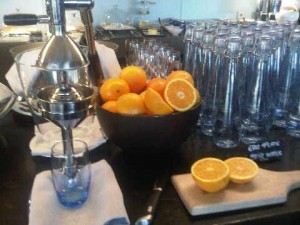 On cruises and at resorts, customers can go wild but on serious occasions breakfasters are often rigid in what they eat. At The Peninsula Tokyo, for the gal it has to be an omelette, made with such care so that the fluffiest interior is encased in the lightest peripheral seal (this was the hotel that made me a special video showing the stages of omelette-making). At Grand Hotel Kempinski, Geneva, you can squeeze your own juice. Sadly, all too often breakfast is overlooked by marketers and gets no mention in press releases. I have just been sent 456 words on Grand Hyatt Taipei‘s new Café. It has 290 seats, but then the hotel has 853 rooms. Of all that text, I still do not know who designed the space, and a mere 13 words are devoted to the early-morning meal, namely ‘ Café is open for breakfast from 6:30 am to 10:30 am for breakfast‘ – and two of those words are superfluous repeats. 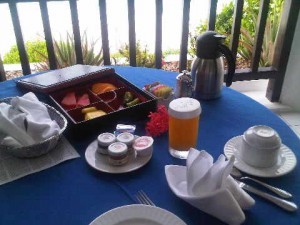 It is primarily because breakfasters do want to choose something special that I am a 100% fan of breakfast buffets – how can one trust ordering croissants å la carte unless you know whether they are midget or maxi, burned or golden? Memorable buffets in luxury hotels include Adlon Kempinski, Berlin; The Eden, Rome; Grand Hotel Kempinski, Geneva; Grand Hyatt Hotel Martinez Cannes (where I will be again, in a few days’ time, ready for ILTM 2015); Hotel Cala di Volpe, Sardinia; and any Hyatt, especially in Asia Pacific. And then there are the smaller, highly select buffets in top hotel club lounges, but that is another story. Just occasionally, however, as a respite from a buffet, I do choose room service – and that, too, deserves its own space.