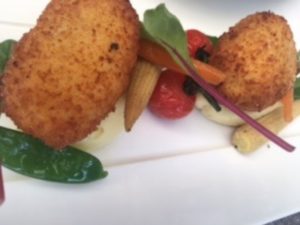 Obviously the gal had to taste a chicken Kiev while in that city, and where better to try it than at a luxury hotel run by a food-loving Parisian? Jean Baptiste Pigeon, who runs InterContinental Kiev, has been with InterContinental for over three decades and some of his postings must surely have challenged a Frenchman’s taste buds – Abidjan, Cannes, Geneva and Paris itself would have been fine, but Bahrain and Jordan’s Dead Sea are better known for mezze than haute cuisine. Here, at InterContinental Kiev, he has decreed that chicken Kiev, or Kyiv, should be served not as one enormous mound but as two more-delicate bumps, as shown. Some think this dish was invented in 1819 by Carème but others say no, it was at the 1970s opening of the Moscow Hotel here. Traditionally, it is made by pounding butter into a boneless chicken breast, wrapping the whole in batter and deep-frying. 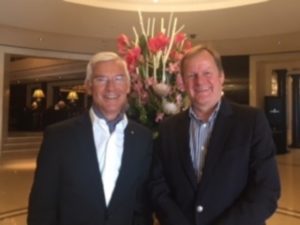 Jean Baptiste Pigeon had invited another IHG colleague, Glaswegian John Cairns, who runs the Holiday Inn Kyiv in the city’s Toronto-Kyiv mixed-use centre, funded by a concern headed by former International Finance Corporation IFC manager Yuriy Kryvosheya (it is worth pointing out that Canada’s diaspora, numbering over 1.3 million, are the largest group of Ukrainians overseas, dating back to the first decade of the 19th century. We, the Frenchman, the Scot and the English girl, talked about other Ukrainian dishes, including perepichka, deep-fried sourdough, and salo, salted pork fat that aficionados says must be white, with a pinkish shade, from the back and sides of a pig, perhaps salted or smoked and sliced on rye bread, with garlic. I was not tempted. 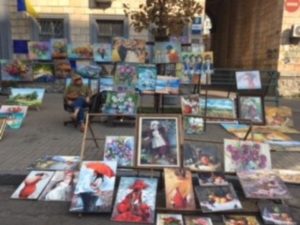 We also chatted about the amazing bric-a-brac market that occupies Volodymyrska Street (turn down right, one block west of this luxury hotel, going toward Andrius’kyiuzviz). The stalls are there every day, but they proliferate at weekends. Here you find old ladies selling long time treasures as well as ‘artists’ trying to offload what are, quite honestly, the most tasteless just-made marquetry ‘pictures’ that you can imagine. According to what I saw there in Volodymyrska Street, and souvenirs suggested in the tourist publication Kiev Check-in, the most popular things to buy include brightly-coloured traditional embroideries, but I think I would suggest simply taking home photographs as souvenirs. 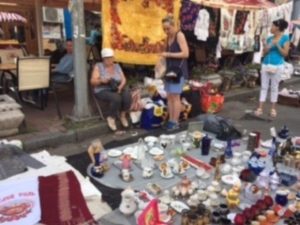 Places I would like to visit next time would honour Kiev touchpoints, say the Deriugina School of gymnastics, named for champions Albina Deriugina and her daughter Iryna, also a world champion, and anything I could find on Ihor Sikorskiy, who counted Leonardo da Vinci as his hero and went on to found the Sikorsky Aircraft Corporation. There are, sadly, very few tourists in Kiev these days but even the hordes of businesspeople, led by bankers and consultants, who flood in every week should get hold of a fascinating book, Awesome Kyiv, for ideas to learn more about the place. But, this trip, I have one more luxury hotel on my agenda…