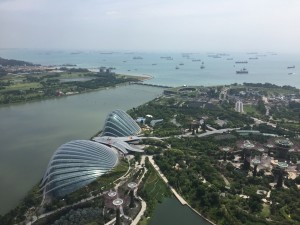 Look down, and out to sea

It is a weird feeling being on top of Singapore‘s largest luxury hotel, the 2,561-room Marina Bay Sands. This is the view from SkyPark, the big tray that sits on top of the E-shaped structure (the ‘tray’ is the connection, with three 55-floor legs dropping down below). SkyPark can hold 3,900 people. It is the world’s largest public cantilevered platform, and it overhangs one end of the towers by 200 feet. Anyone can go up to SkyPark, in an elevator that rushes you aloft noiselessly and speedily – for the record, the charge for non-hotel guests is S$23, and for kids under 13 it is S$17, and anyone over 65 pays S$20. It is absolutely worth the money. Look far out to sea, and the flotilla of anchored ships. Look down, at the giant eco-domes of The Garden on The Bay, and beyond to the panorama of the city. The experience is comparable to the view from the top of the 118-floor Ritz-Carlton Hong Kong, where the traffic far below appears as pinpricks. 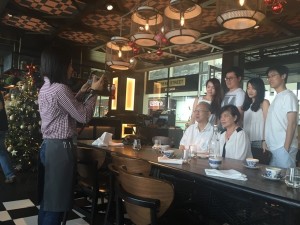 Back closer to earth, I am revisiting the complex’s Gordon Ramsay‘s Bread Street Kitchen and it is EVEN more enjoyable than before. The restaurant’s all-window wall looks out at a popular pedestrian-and-cycle way, and the bay beyond. Continual passers-by, families, young couples and eager-beaver cyclists in all their lycra gear, provide lots of amusement. Inside, the space has a certain amount of dark wood, Singapore style, and old hanging lamps and a few old sextants on a shelf, but nothing is too much. It is all very controlled. Lots of local families are here celebrating the weekend. Local expats have evidently come for the Sunday brunch carvery of the day, which happens to be roast striploin with the most enormous Yorkshire puddings – the table next to us has a jug of Pimm’s O’Clock, to go with it. We prefer a glass of Piper-Heidsieck, specially labelled for Marina Bay Sands. 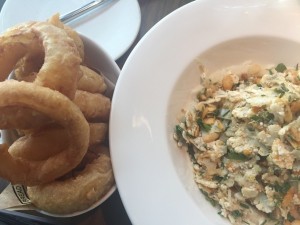 The brunch menu also offers a BSK omelette, open-faced with mushrooms, gruyère and rocket; you can also have that Nigella Lawson special, avocado on toast. I go for something that is original, for me at least, a big size salad of finely-shaved cauliflower with parmesan, toasted almonds and a shallot dressing, and a side of the world’s best onion rings. Note for the future: come back here for those onion rings, but also for the service. Servers in blue gingham shirts dance around, really happy if you are having a good time. I wonder if the atmosphere is as good in the other celebrity-chef restaurants here? Wow, Tamir Shanel, who is Mr Food here at Marina Bay Sands, has pulled in a culinary cast which, as well as Gordon Ramsay, stars, in alphabetical order, Mario Batali, Daniel Boulud, David Myers. Wolfgang Puck, Justin Quek, David Thompson and Tetsuya Wakuda. 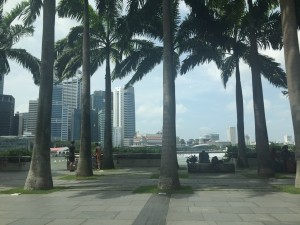 Look out, at a relaxing walkway