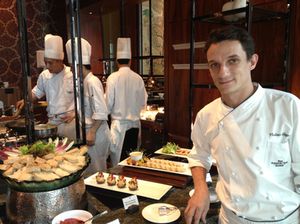 Vladimir Siljegovic (his foie gras to the left)

Americans might claim they invented Sunday brunch but according to the 1896 Oxford English Dictionary an article in Punch magazine cited a heavy post-church meal that would satisfy those who had been clubbing, or whatever it was called in the late 19th century, the night before.  Obviously they did not want to get up early on Sunday.  Ergo, after church they were ready for a late breakfast but it was already nearly the accepted lunch time.  Fast forward to the 21st century and there are few luxury hotels anywhere around the world that do not offer Sunday brunch.   The gal tried the spread at Siam Kempinski Hotel Bangkok. 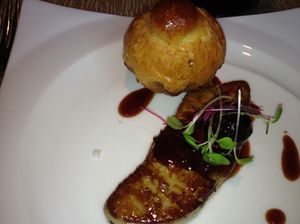 What he prepared as a taster

And what a spread it was. Parisian chef Vladimir Siljegovic was there personally, showing off great lobes of French foie gras (not from that household-name brand Rougié but from a boutique supplier Alain Francois, in Nantes).  Let me cook you some, said he.  Lovely, said I, but keep it small.  He personally later carried over a lightly pan-fried taster topped with cherry compote, and with a one-bite home-made brioche.  It was so good that afterwards all I could manage was a plate of marinated and grilled vegetables.  But brunch can suit me, as well as those who want eggs, bacon, steak or anything.  The idea is for chefs to show off what they can do.  Here there is a Chinese corner, a Japanese corner and of course a Thai display. 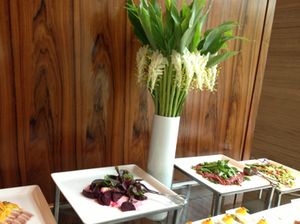 There is also a splendid array of cold cuts, near to a Berkel slicer.  These are almost invariably bright red but here, stylishly, the slicer is black.  Purely as a matter of interest I check prices.  I hope restaurateurs and chefs, and owners of dining establishments, check eBay as you can get 75 percent or more off as there seems to be limited demand for professional slicing machines.  This is understandable. Want a slice of salami?  Easier to slice it off yourself with a kitchen knife than put it on a slicer, even a Berkel, and have to clean that piece of equipment later.  Talking of cold cuts, by the way, whether or not it is the Rise Of The German Foodies but there seems to be more evidence of different cold meats at all times, not only Sunday brunch. 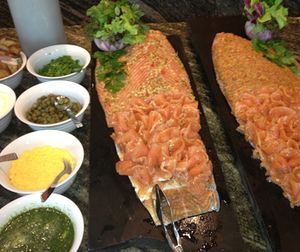 At the fabulous new Sundara eater-tainment centre at Four Seasons Jimbaran Bay, Bali, there is a dedicated cold-cuts area with glass fronted cold cabinets – actually they call it charcuterie, exactly the same as cold cuts.  I even see a charcuterie plate on the starters menu at my local pub, back home.  The challenge is that if you start eating you go on and on…   like with the smoked salmon here, on another part of the buffet.  Look how meticulously the salmon has been sliced and put back, as if whole, on a fish-shaped wood platter with silver ‘head’, and, even more meticulously, the cuts nearest the customer have thoughtfully been twirled, for easier serving. 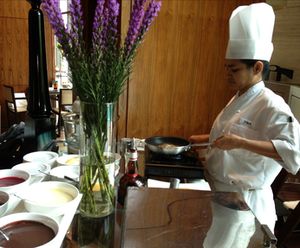 A good brunch has music – here, a jazz band, thankfully at the end of the room so we could still talk.  It also has a range of desserts, as if people save up all week long to splurge on sweet things and calories on a day of supposed rest.  At the Sunday – sorry Friday – brunch at Fairmont in Abu Dhabi, you enter view such a long guard of honour of desserts that you begin to think you need to start, middle and finish with icecream or pies.  Here, the desserts have a separate room all to themselves, but even then there is not room for the waffle station, which protrudes into the main room. Later, as if to cajole us all into having a slice of cheesecake or Sachertorte (or perhaps the circle noir of Café Royal Hotel London), a server comes round with cakes. 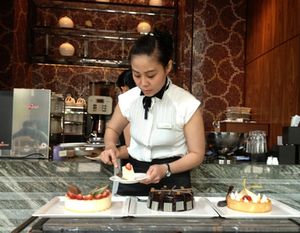 A few tasty cakes roll by

Good brunches, too, have a kids’ area, ideally with entertainers and balloons and adult supervision.  And for the adults left behind for the eating experience, a good brunch is even better with Champagne – here at Siam Kempinski Hotel Bangkok it is Möet, rosé.  After such a pleasurable experience, what is then perfect for some is shopping, and fortunately this luxury hotel is connected to Siam Paragon, one of Asia’s biggest malls.  I check the site: Balenciaga, Boss, Burberry, Canali, Chanel designed by Peter Marino. No wonder Chinese are rushing here, to shop.