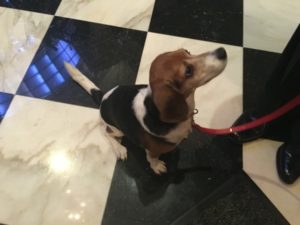 How many ambassadors have business cards that instantly evoke attention? See the card above. It is the calling card of Lord Monticello, normally known as Monti. He is a beagle, left, rescued from a canine centre by The Jefferson Washington DC, the lovely luxury Preferred hotel where guests include, arguably the best-known television personality in the USA, and the best-known Hollywood name who looks after six children, her filmstar husband, and the world (both these serious celebs are female, but this is a hotel for butch guys, too). Monti is such a guy. He wears his bespoke Savile Row jacket like any well-dressed star – it has a pocket for his business cards. 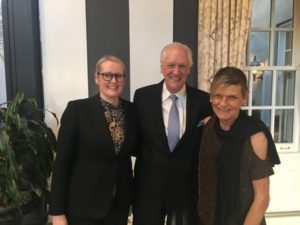 It was Savile Row’s champion female master tailor, Kathryn Sargent, who made Monti’s jacket (she comes to this hotel twice a year, to see clients, see www.kathrynsargent.com for her schedule, also, in Chicago and New York). The jacket will be worn by Monti some time this August (2016), when he hosts a benefit for the Leash Party ‘superpac’ supposedly to support his bid for the US Presidency, but in reality is going to Wounded Warrior, to fund guide dogs for wounded US veterans. His Leash Party promises free bacon for all dogs, and elimination of squirrels nation-wide, plus fair wages for all hotel dogs, and a dog’s right to choose whether or not to live with a cat. 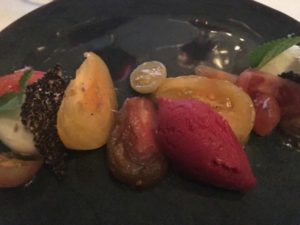 There is more. Leash Party says, according to its manifesto, it needs continuing care for all senior dogs, adoption of all dogs worldwide, and, with a bit of self-interest, fighting for the rights of all beagles, plus combating climate change so that no dog will ever have to wear a raincoat again. The conversation needed, however, to move on. Post-canine, we talked about how Kathryn Sargent, a would-be dress designer, was diverted into tailoring and an apprenticeship with Gieves & Hawkes, and then opened her own-name store, in London Mayfair’s trendy Brook Street as well, now, as Savile Row – her trademark buzzwords, she says, are bespoke, hand-crafted and British. And then we talked American, specifically food. 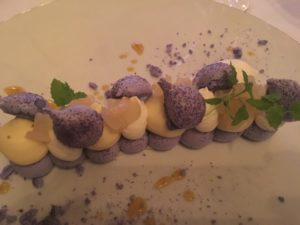 .. and how about this dessert?

We were dining in this luxury hotel’s gorgeous and elegant (and always-full) Plume, starting with half-bite gougères and then, in my case, a ‘length’ of heirloom tomatoes, and finishing with the most delectable dessert for many moons, namely a pearl necklace shape of tiny meringue bites of crystallized violet, topped with lemon honey chantilly cream blended with Greek yoghurt. Of course we drank American, both Pinot Noirs, a Christopher 2012 Willamette Valley Unfiltered and a Littorai 2012 Hirsch Vineyard Sonoma Coast. As we got up, Monti appeared – he had had his own dinner in the office of Philip Wood, the brilliant MD of this luxury hotel – to say goodbye. I walked away with a sprightly step, feeling enlightened by being back at The Jefferson. NOW SEE THIS VIDEO OF KATHRYN SARGENT, BELOW