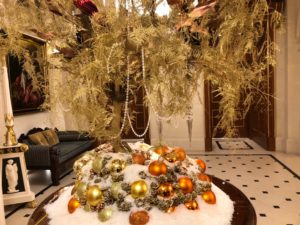 Names always fascinate the gal. Why should one of London’s most central luxury hotels, The Lanesborough, call its restaurant Céleste? Look it up and the celeste is a keyboard instrument, four- or five-octave, rather like a harpsichord – invented in 1886 by a Paris musical builder, Auguste Mustel. Tchaikovsky was the first composer to use it, both in The Voyevoda and The Nutcracker. The Lanesborough’s Céleste is its central conservatory restaurant, conceived by late designer Alberto Pinto as a homage to Wedgwood, with palest blue walls and white highlights (see the video below). 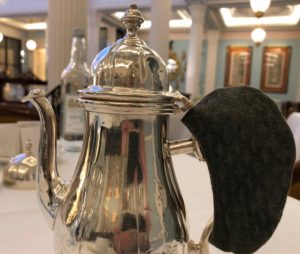 Walls are hung with artworks and prints, and antique bookshelves display such leather-bound tomes as a run of works by the Swedish artist Albert Engström, 1869-1940. There is a grand piano, too, usually for display only but on such special occasions as New Year’s Even all the restaurant’s furniture is removed to make the space into an hours-long entertainment venue, with live groups and dancing led by enthusiastic London millennials and their friends (get the young up first and perhaps shy elders will follow). Generally, though, the room is all Regency elegance, complete with gorgeous silver coffee pots with little padded-cosy hand protectors for the hot pot handles. 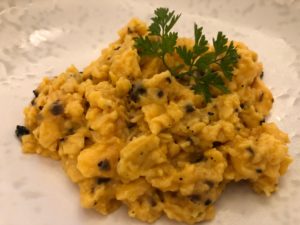 Céleste’s breakfast menu includes the very-English Forman’s smoked Scottish salmon with blinis but I was diverted to the scrambled egg with black French truffles, which came on a Bernardaud plate (French) and, as ordered, a side of granary toast (I suspect home-made). The crisp linens were Italian, Rivolta Carmignani, the cutlery was Heritage Silverware England. Later, I thought back to all the great breakfast egg dishes I have had recently, with avocado, at Los Angeles InterContinental Downtown, and with caviars, onboard Seven Seas Navigator. Whenever scrambled egg is mentioned, too, I think of one of the greatest, and most articulate, culinarians, Stars legend Jeremiah Tower – currently appearing in Rick Stein’s television series on Mexico and on his way back to Oxford for the next meeting of the exciting new Oxford Cultural Collective. 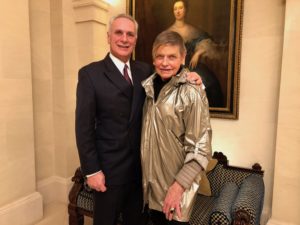 Back to this gorgeous luxury hotel. The Lanesborough is on the west periphery of Hyde Park Corner, InterContinental London Park Lane is at the north. Are these the two most-central luxury hotels in London? Technically, no. Charing Cross is traditionally the centre of London, with all distances measured from there. Oh well. It is time to move on, and Geoffrey Gelardi, who has managed The Lanesborough since its opening in 1991 – he arrived there a few months before, of course – saw me out. He has seen so much: the hotel has gone through Rosewood and St Regis to its present affiliation, The Oetker Collection, and its restaurant has similarly metamorphosed. To see what it looks like today, check the video below.