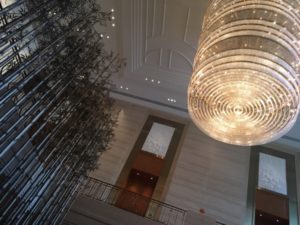 Tianjin, 30 minutes by high-speed train from Beijing, is the world’s sixth biggest city, known for Airbus, and Boeing, and Toyota, and for having the world’s fastest computer, Tianhe-1A, plus biotech and pharma, electronics, IT, you name it. It is also big on things for single-kids to do, adored by six adults each – see them playing, above). And now the city has its second true luxury hotel, the gorgeous Four Seasons Hotel Tianjin, which opened this January on the 2nd to 26th floors of a 48-floor building owned by Tianjin Modern Group. The gal was told that its chairman, Ma Cheng Xi, fell in love with Four Seasons Bora Bora and he wanted a hotel just as good – question, when you are met, pre-arrival, at ANY other luxury hotel, anywhere, do you find bananas, all in perfect condition, and a hotel-branded seriously-effective thermal cup, with good flavourful coffee, waiting, with water and moist towels, in the limo? 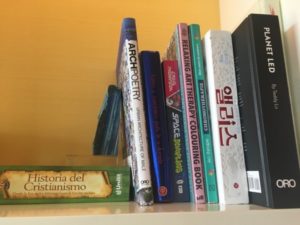 An eclectic array of books

Well, although obviously Chairman Ma cannot, in Tianjin, get the ocean of French Polynesia he certainly has the looks within his 259-room hotel, which comes with 108 residences. This is Pierre Yves Rochon doing Chinese Art Deco, harking back to the days of Old Pekin, and Old Tientsin, as it was called then. Tall ceilings allow soaring walls, with gloriously-lacquered wood-look curved panels, so convincing I asked what the wood was. Ah, I was told, wood not allowed in modern buildings in Tianjin, which falls under Beijing metropolis (they did have an extremely damaging fire, in August 2015, at the Port of Tianjin). These wood panels are in fact lacquer-painted aluminium. But the marvellously global, and erudite, selection of multi-lingual books, and everything else in rooms, appeared to be real. 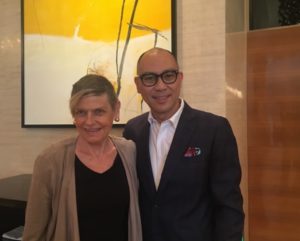 As you can see from the video below, rooms are elegant and comfortable – I liked end suite 2108, looking over a football field and a busy centre-city crossroads. Two ceiling-high panels, one either side of a decorative fireplace panel, effortlessly slide across for bedroom privacy: I also appreciated having what is now becoming one of my favourite shower controls, simple push-buttons, one for each shower head (Hansgrohe), and it was really smart of the duty manager to cut off my complete motion-sensor system, controlling all curtains and all lights, within five minutes of my requesting it. Yes, I did a lot of creative writing here, and I also toured the neighbouring Isetan, goggling at ten times the number of makeup brands than I had seen in Harrods or Neiman Marcus. 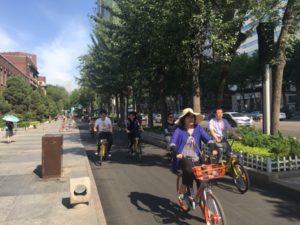 Of course there was time for Les Oceans spa, where all 11 rooms are named for oceans (mine, Caribbean, had a plausible working log-look fire). And then it was dinner, with GM Byron Chong, a Hong Kong enthusiast who met his wife over mooncakes, and joined Four Seasons when it took over what had been The Regent Hong Kong. And over Renato Rizzi’s superb Firstlight grass-fed wagyu in Cielo restaurant, I heard about all the other luxury Four Seasons he has experienced, in Egypt, the Maldives and USA as well as China. He had originally wanted to follow his parents and other family members into medicine but it seems the glamour and people of luxury hotels won. I do not know how he manages but he does sometimes still find time for his hobby, repairing bicycles – which seems particularly appropriate here in China where temporary-rent bikes, say Mobike’s orange bikes and Ovo’s yellow bikes, have simply taken over. Mobike launches in Manchester UK, incidentally, on June 29th, 2017, so it will be interesting to see what happens. Unlike what is the norm in the west, Chinese rent-a-bikes do not need specific racks: find any bike, scan its QR code with your device and the back wheel’s clamp opens, and when you have finished, drop it anywhere, and close the clamp. Mobike already has BIG investment from Singapore’s mighty Temasek. Apparently Ovo was started by two students at Beijing University, and to get traction their bikes are free at weekends, and this marketing tack is working as Alibaba is among its latest-round investors. NOW SEE THE VIDEO BELOW