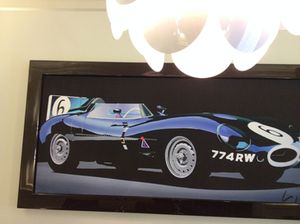 A memorable Jaguar (on a wall…)

The real luxury traveller needs to know a lot of things about an awful lot of things – and that adjective is deliberate. The gal must understand airport codes and time zones and what to do when a reservation has been made for the wrong day. It is important to know who is being talked about when someone points out the portraits of Emperor Franz Joseph in Vienna’s hotels (on horseback, in Hotel Bristol, and, at its Luxury Collection sibling, The Imperial, wearing shoes that turn as you walk past, like the Mona Lisa’s eyes). So what is the significance of a Jaguar Suite at 51 Buckingham Gate, London, soon to be Taj 51 Buckingham Gate? 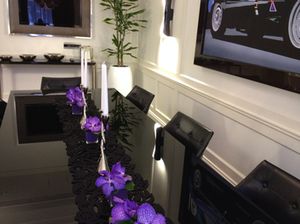 The suite’s dining room, with another Jaguar on the right wall

Elementary, My Dear Watson, as Sherlock Holmes would have said.  Tata owns both Jaguar (and LandRover, plus the basic Nano) and Taj hotels.  It was therefore no big leap in creativity to invite Jaguar’s lead designer Ian Callum to do the 1,800 sq ft Jaguar Suite, number 1142. It is exactly the same proportions as Sabyasachi Mukherjee’s Cinema Suite, where I stayed last visit: two ensuite bedrooms, a further powder room, sitting room, dining room with table for eight, pantry… But whereas there are many other suites around the world with private media rooms, I do not remember ever staying in a car suite before. There was a Wild West suite at Sunway Lagoon Resort, outside Kuala Lumpur, where I literally slept in a covered wagon but they have fortunately got rid of that… 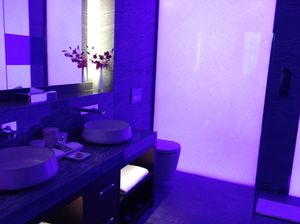 One of the two main bathrooms

So, I dare to say this suite is unique. I have a Jaguar marque, from the front of a car, as desk paperweight, and lots of cream leather. Just as in the Cinema Suite, one bathroom is infused with yellow light behind an opaque glass wall, while the other is infused with pink (OK, I am not colour-blind, the photo just comes out blue). I plan my time, as I have a really early start tomorrow morning, and head down to the gym, which will not open before I leave. The gym, and the spa, are shared with this hotel’s sibling, what is now a Crowne Plaza across the courtyard.  This will be renamed St James’s Court Hotel London – a Taj Hotel, as of January 2014. 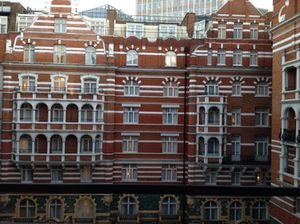 View across the inter courtyard

Back in my temporary home, I look across the courtyard to the amazing red brick and stone structure that dates back to 1897, built by a retired army engineer Major Charles Pawley. There are eight buildings round the courtyard, linked by a frieze of figures that is supposedly one of the largest of its kind anywhere. I wonder what the Major would have thought of a Jaguar Suite here?   An interesting fact: Jaguar started life as the Swallow Sidecar Company, founded by Sir William Lyons in 1922, and its name was changed after WWII to avoid any connotation with SS: it became part of British Motor Holdings in 1966 and then of British Leyland. It was demerged, listed on the stock exchange in 1984, and bought by Ford in 1990. 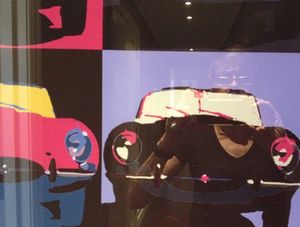 And yet another Jaguar rendering

Pass the parcel, a Jaguar parcel, to Tata.  In December 2012 it was officially incorporated as Jaguar Land Rover Ltd. The Jaguar chief designer, and designer of this suite, is Scotsman Ian Callum, whose younger brother Moray interestingly heads design for Ford in the Americas.  Ian Callum knew what he wanted to do from the age of 14, when he wrote to Jaguar asking for a job, and he got a detailed reply from Jaguar’s then Vice-Chairman, suggesting he get proper art training (he did). His latest car is the 2014 E-Type convertible, Jaguar’s first pure two-seat sports car in 40 years. The Jaguar Suite, by the way, appears on his own website, together with trophies, and a boat he has also designed. 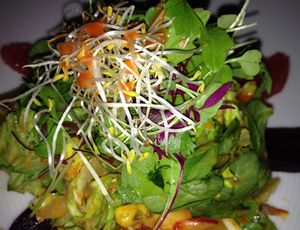 Time for dinner with my good friend Digvijay Singh, now in charge both of this hotel and its sibling. Digvijay used to ride every morning back in Delhi and his face lights up when he tells me that he borrows a polo pony here, whenever he wants it.  What, I ask myself, is the point of luxury hotels unless those who design them, those who stay in them and those who work in them can also follow their passion? At that I start my really enjoyable dinner, at the hotel’s Michelin-starred Quilon restaurant.