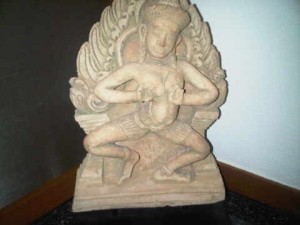 There are statues galore at The Sukhothai, Bangkok – a peaceful hotel where stress seems to wash away.  The statues are not named.  Either you are supposed to know who they are or you can imagine.

The gal likes to think that they may be rulers of the Sukhothai kingdom, which operated in the north of Thailand in the 13th and 14th centuries.

There is still a Sukhothai region, and its town, also Sukothai, was declared a World Heritage Site by UNESCO in 1991.  Another place to put on your future itinerary, gal. 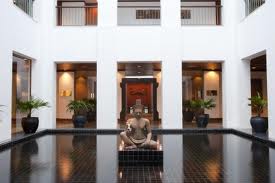 Looking across a courtyard at other statues.

Interestingly, if you look at the Sukhothai Kingdom kings, they ruled from one year (Pho Khun Ban Muang) up to, the longevity bearer, Phaya Leuthai (Phra Maha Thammaracha III), a full 31 years.

The current King of Thailand, Bhumibol Adulyadej, Rama IX, by contrast, has been on the throne since June 9th, 1946. He is the world’s longest-serving current head of state and the longest-reigning monarch in Thai history.

I was looking at a marvelous book the other day which had lovely photos of him as a young man, meeting and marrying the woman who became his queen – she who has just celebrated her 80th birthday. 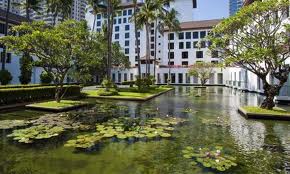 At the Sukhothai luxury hotel in Bangkok, you feel time stands still. It was deliberately intended to be stylish, which goes on forever, rather than fashionable, which is here today, gone tomorrow.

It was opened in 1991 and did cause awe-struck comments for bedrooms that soared to 18 feet, with ceiling-high doors, including within rooms, and full-height curtains, all of them Jim Thompson silk in such marvelous shot colours.

Room 137, for instance, has 16-foot curtains falling from the mahogany cornice that runs round the entire area.  Two French windows have silk that is dark brown shot with green, which match decorative curtains hanging at the base of the four-post bed (no posts, but an upper tester is attached to the ceiling). The building was by Adrian Zecha and Kerry Hill, the interiors are Ed Tuttle, he of the Park Hyatts in Milan and Paris. 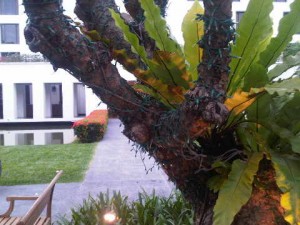 There are 200 rooms in this Leading hotel and the ground floor  rooms looking into the main inner courtyard are especially calming.

You are not actually AT the water level, as you are at Trident in Gurgaon, Delhi, but your two small terraces, outside the French windows, are only a few inches above.  (At yet another luxury hotel, Atlantis The Palm in Dubai, some rooms are actually UNDER the water, completely, so like a diver you look out at fish, which actually is opposite of calming.)

Here, it is luxury, stress-free.  You walk across the courtyard, skirting a tree that has parasite plants growing on it, to get across to the main building. 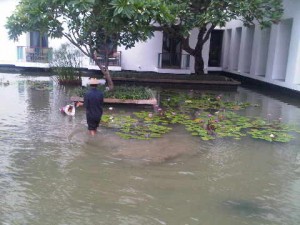 Early in the morning fishermen, or plantmen or whatever you call them, are already bending over to check for the tiniest bit of unwanted weed in the decorative pools.

The waters here are not intended to be completely covered in lily or lotus leaves.  You feel each leaf has been planted, exactly.  I am told that most of the business guests who stay here return again and again: European supermarket buyers are among their number (they come to talk to suppliers of fresh produce up in the northern hill areas of Thailand). 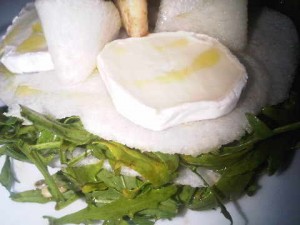 Simplicity of a goat cheese salad ….

Later in day there will still be some people lounging around more  water, the outside pool in a block at right angles to the main hotel.  With lush greenery around it is very quiet – the only activity comes from those working out furiously in the gym that can just be seen through two glass doors.

If you have any energy in this relaxing place, you only have to walk the hotel’s own retail arcade, which has lots of local antiques. One of the most exciting stores is run by Englishman Alexander Lamont, yet another of the foreigners who came to Thailand, and stayed put. 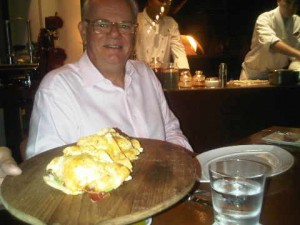 .. and simply the tastiest ham-filled bread, for Greg Meadows

Greg Meadows, who heads this relaxing place, is among that number.  He was destined for his family’s shoe business back in his native South Africa but somehow escaped, and while working at the Park Lane Hotel in London he was headhunted by Kurt Wachtveitl, then the new and young GM at what was then The Oriental, to be his deputy.  Greg has done the rounds of Bangkok’s top hotels and now, back again at the Sukhothai, he is as wise and as young as anyone. 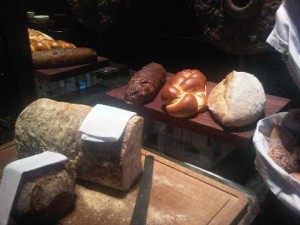 He runs a simple hotel – as in simply super.  Stay here if you want a  simple salad, say goat cheese on arugula, or a bit of pork cooked in hay, or some of the best flatbread in the world.  They make it in front of you.

A young woman wields a Berkel slicer, and puts paper-thin slices of ham, with greenery, into the bread, baked in the pizza oven behind her.  It is so delectable you could make a meal just off that Which brings the gal on to bread.

Any five-star hotel that produces really good breads goes to the top of the five-star rung.  Taken as a nation, sadly many of Italy’s de luxe hotels go down the ladder when it comes to breakfast breads.

The question is how they can produce outstanding ciabatta, foccacia and grissini for lunch and dinner but why, at breakfast, all they put out is tasteless.  One answer might be that Italians still do not ‘do’ healthy breads first thing in the morning.  They prefer their chocolate or fruit tarts. 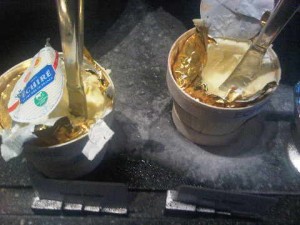 .. and butters, salted and unsalted, in generous containers…

Here at the Sukhothai, breakfast breads are copious, and healthy.  While munching, I think of a friend setting up a brand of health-fitness hotels across the USA.  His research finds that over 40 percent of American travellers want to be offered fit-healthy while travelling.

Greg Meadows and his team go for the best.  Instead of nasty little butter sachets, by the way (OH so down-market), here there are massive tubs of French butter, one salted, one unsalted, for you to help yourself, to as much as you want.

They do the same at other top-rung hotels, notably La Mamounia in Marrakech and at Costa Smeralda, on Sardinia. 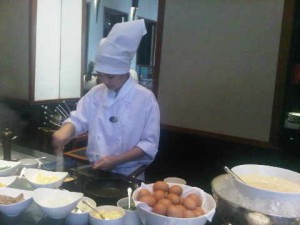 .. and the egg chef is at the ready

Stress-free is having all the right things, when you want them rather than when someone else wants you to have them, in a calm environment.  I cannot remember any music in this hotel.  Silence is golden.  I do remember magnificent flowers, in so many places.  They are royal, of course, from Khun Sakul Intakul.