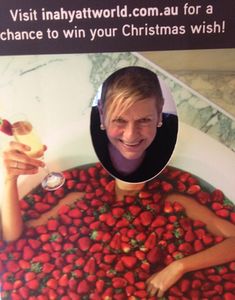 Is life a bed of strawberries?

What on earth is the gal doing supposedly immersed in a bath of strawberries (except that as you realise, she has merely stuck her head through a hole in a standing board)?  This is all part of Hyatt Australia’s just-finished social media initiative. All the company’s luxury hotels joined together in a wish-and-win social media campaign, with in-street displays and online interaction opportunities for anyone, regular Hyatt users or not, to say what they wished to win. A romantic weekend for two, perhaps, or the chance to shop in all the latest boutiques? 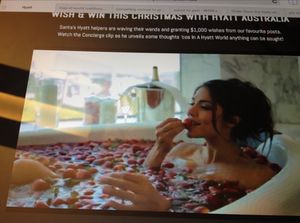 A video accompanying the campaign went viral.  It showed some ideas, like spending all day in bed, or a surfeit of chocolate and strawberries.  The video for this supposed ‘wish’ showed a model – Miranda Kerr, ambassador for Qantas – bathing in a tub of warm chocolate, with strawberries floating on the surface.  Yuck.  I would rather be Cleopatra, bathing in asses’ milk, or, more realistically, be myself in a tub with hot hot water and fantastic bath salts, perhaps Bulgari or L’Occitane.  Actually, come to think of it, who DOES produce the best bath salts?  The tub would be at a Wynn hotel, in Las Vegas or Macau, as then I would also have a lovely wooden back-scrub brush, and a television in the end wall to watch the news on BBC World. 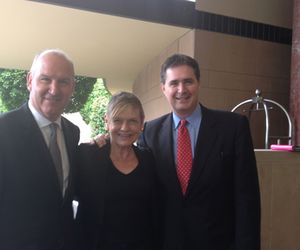 In Melbourne I met up with the GMs of both the city’s Hyatts, Robert Dawson, here on the left – he runs Grand Hyatt Melbourne as well as being regional VP Hyatt for the whole of the Pacific – and Ilan Weill, GM of Park Hyatt Melbourne. It was he who had personally driven me from his place to the Grand Hyatt as it was raining. Yes, it was still part of Melbourne’s renowned cool-change, when, as city residents say, you can have all four seasons in one day.  I remember being at the opening of Grand Hyatt Melbourne when it was Hyatt on Collins.  In those days it had a sensational two-floor – ground and basement – food court. 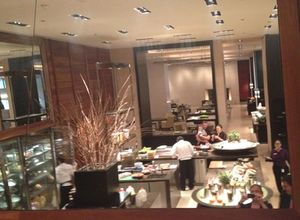 Those days are long gone, as food courts have gone down market.  Now the basement part of that area is a fabulous events-wedding space called The Residence (super for weddings, including kosher). The ground floor area is a walkway through from Collins Street to the hotel lobby, flanked by expensive retail.  The main restaurant is now one big flowing space on the main floor (designer BARstudio, who also did the sensational new-look of Park Hyatt Sydney). There are private-room areas and counter areas, and big high-wall mirrors allow interesting reflections, as in the photo here.  I look at the breakfast buffet. 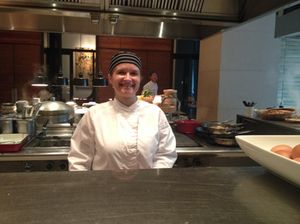 The omelette chef, I am told, is renowned.  What is her secret? Organic eggs, salt and pepper, and no water, and only olive oil, is her answer. Of course there is a Chinese section, with masses of different congees (there are now 20 flights a week from different Chinese destinations to Melbourne, bringing business people looking to invest and others who want to try their luck at Crown Casino down the road). I hear sports tourism, by the way, is big in Melbourne. Right now cricket followers are here for The Ashes, and they drink a lot of beer. For the Australian Open, which this year runs January 13-26, serious tennis lovers stay right until the early-morning finish of the day’s play and are too exhausted to eat and drink at the hotel. 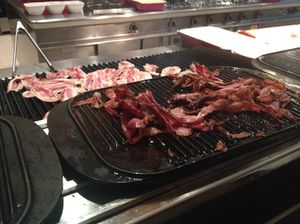 For the Grand Prix, most hotel guests are hosted for meals arranged by the Formula One sponsors, so, again, not much eating and drinking at the hotel.  At the early-November Melbourne Cup, race-goers favour champagne, and chicken sandwiches.  For any football or rugby game, there is massive consumption, at the hotel, of strong drink, and food, in that order.  Somehow I imagine that those lucky enough to be staying in this luxury hotel would start the day with, say, an omelette, with a side order of bacon.  Australians eat their bacon any way, I am told, a bit rare, English style, or crisped to a frazzle, US style. Something for all tastes.