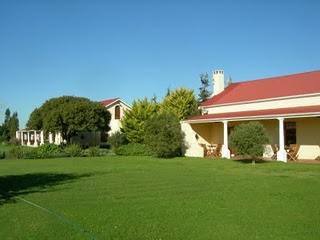 I went to visit Strandveld Vineyards, the most southerly production in the whole of Africa – it is only seven miles further south to the Cape of Good Hope.

Two thousand acres of windswept, rolling land are, shall we say, somewhat isolated, but winemaker and philosopher Conrad Vlok and his family just love living here (they are all outdoor people, fortunately).

Conrad shares his passion for life, for nature, the soil and the food and drink he produces. Actually, he says, Strandveld is not only the wine, it is the terroir, a word he uses often. He has laid out a giant circle of the four different soils of the area, sandstone, quartz, iron and fossilised iron (see photo).

150 acres of the whole, set at 180-300 feet above sea level, are planted, with Grenache, Mouvedre, Pinot Noir, Sauvignon Blanc, Semillon and Shiraz. Rows of vines are flanked by canola straw, for mulch, or wild mustard, to divert creepy-crawlies that might otherwise be tempted by the vines that already battle prevailing winds and a sometimes harsh climate. About 300 tons of grapes are hand-picked, in February. Stainless steel tanks and 25,000 French-oak casks are stored in a 13,500 sq ft winery, and 40% of the output will be exported.

There are two main labels, www.strandveld.co.za. The foundation label First Sighting is named for explorer Bartolomeu Dias’ 1488 sight of land, and the premium Strandveld label refers to the coastal belt around the Cape (some Strandveld wines are named Anders Sparrman, for explorer and naturalist Anders Erikson Sparrman, 1748-1820).

The most expensive wine we tasted, retailing for about 140 Rand, was the Strandveld Syrah 2008, a blend of year old vines, 95% Shiraz, 3% Viognier, 1.5% Grenache, 0.5% Mourvèdre. Picked grapes were left to cold-soak for 48 hours and, after fermentation, there was 18 months’ barrel-maturation before bottling on December 2nd, 2009. With an alcohol content of 13.7%, the wine has a nose of cloves, cracked black pepper and spicy aromas, layered with intense blackberry flavor. Vlok would pair this with roast beef, duck or venison.

I was with one of Strandveld’s seven owners, Robert Appelbaum, and his fiancée, the equally-fascinating Marina Coleman, teenage psychologist and author of the graphic book HIV & Aids, which has so far sold 115,000 copies worldwide www.marinacoleman.com. After a fabulous few hours of viewing, learning and tasting, it was time to head on, sadly…. 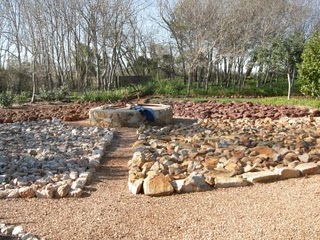 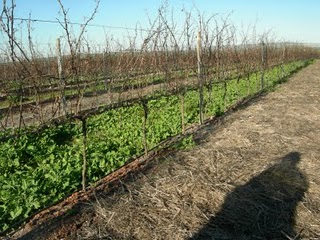