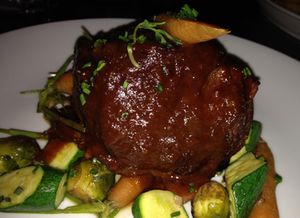 Continuing the theme of when in Rome, or rather in Boston MA… it is time to turn attention to the Yankee pot roast (although Humphrey Bogart famously said that a hot dog at the game beat roast at the Ritz). The game in question would here, says the gal, be something with the Red Sox in it. And let us turn not to any ritzy place but Boston’s doyenne of luxury hotels, the 101-year old Fairmont Copley Plaza. It always had such a stately restaurant, the Oak Room, with its 30-foot high ceiling and an air of the last century. Now all that is changed. 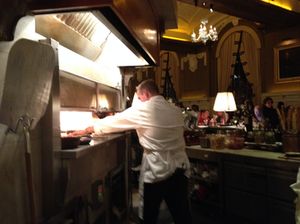 The kitchen is now right in the Oak Room….

To celebrate its centenary, the hotel threw itself a $20 million party in the form of a redo. The Oak Room has replaced its masses of steaks of yesteryear with an All-American menu, say chicken and dumplings, and pot roast. Instead of the chuck that is often used, here centre-cut short rib has been slowly braised, and served with autumn vegetables.  It comes away merely with a fork.  Irresistible. Where we are sitting we can see chefs working a pizza oven, making flat breads that come on big wooden paddles.  Yes, the Oak Room is now live cooking. 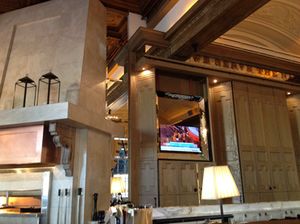 .. which also has a sports-bar feeling

By night the place is so packed you can barely stand, let alone find a place to sit. By day it is fortunately quiet, so you can choose low-chairs, high-chairs at a high table, or sit up at the bar itself. It has a sports bar feel, with television that is just right for watching those Red Sox, controlled by John Henry who cleverly also now owns Liverpool in the UK.  The Oak Room does not have a buffet breakfast, by the way, but then Boston high society does not seem to do buffets. They prefer to order, and take their time. (For dozens of reasons, including its outstanding complimentary breakfast buffet, best rooms at Fairmont Copley Plaza are those that give access to the fourth floor Fairmont Gold Lounge.) 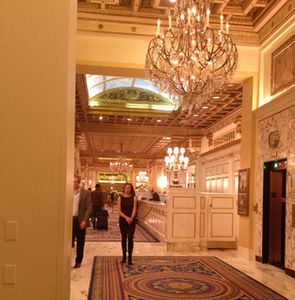 The centennial spend also brightened up the lobby, still pretty much as it was when the hotel, named for 18th century artist John Singleton Copley, opened in 1912.  It was designed by architect Henry Janeway Hardenbergh, also responsible for The Plaza in New York, and the Willard in Washington DC.  The lobby today is home to Catie Copley, the hotel’s black Labrador who has her own social media, and has ‘written’ a couple of local guide books.  Unfortunately whenever I passed Catie was off campus, either being taken for a walk or, more likely, taking a hotel guest for a walk. 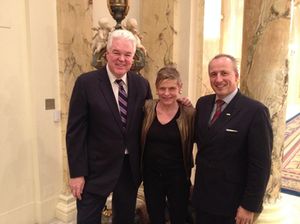 Paul Tormey, whom I first met when he ran Fairmont’s hotels in Bermuda – he wore pale lemon or pale pink Bermudas in those days, was farewelling a colleague, Kiaran MacDonald, on his way back to London where he is in charge of The Savoy, a Fairmont Hotel.  Good General Managers know that the more time they spend in their lobbies, the more effective an overall operation, and the easier it is to get customer feedback. It is certainly more agreeable spending time in this lobby than many others… one of the walkways, from main Copley Square door to the lobby-proper, is being once again named Peacock Alley, complete with a pair of turquoise ceramic birds. The floor has been returned to its fine tiled original.  It is beautiful. 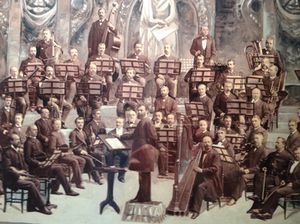 Boston Symphony Orchestra, on a wall of suite 423

This luxury hotel partners with such other Boston institutions as Boston Pops, the Boston Symphony Orchestra – and the Red Sox.  I was in Suite 423, themed for the Boston Symphony Orchestra.  Shades of grey and silver surrounded me, framed photos included a collection of musicians.  I looked out of my windows, at the cathedral to my right and Copley Square immediately below, and ahead. The sun shone. I am reminded again how good it is to be back in the home of the – real – Tea Party.