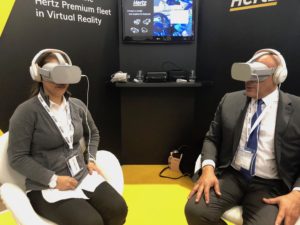 Hide from the world at ITB

During both IHIF and the following ITB there are not only a plethora of work-related happenings but also so many social events. At ITB, with a total of 170,000 travel enthusiasts traipsing around, it was a blessing to find at least two ways to hide from the real world. A few hours later, the gal left Messe Berlin and ITB for the relative calm of the annual Steigenberger Kitchen Party, hosted by Deutsche Hospitality CEO Thomas Willms. He introduced the CEO of the company’s newest brand, Zleep (years ago, the woman painting a sign slipped and her brush put a Z instead of an S…). The hundreds of guests who seemed to arrive exactly at the starting time of 7 p.m. seemed to be at least 98% German, and the few others included Egypt’s top entrepreneur, Naguib Sawiris. 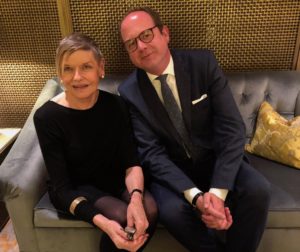 And then it was on to the Adlon Kempinski, first to say hello to Kempinski CEO Markus Semer, who was sadly going to yet another evening event. I, however, was honoured to be invited to the Champagne-and-more gourmet dinner that Kempinski’s CCO Amanda Elder hosted for top accounts and at least two Ministers of Tourism (my table was mainly Cuba and Dominica dominated). Forty of us in all tasted incredible dishes created by Hendrik Otto, Chef of the hotel’s two-Michelin Lorenz Adlon.  Even we sat down we were amazed – see the table setting, above, with bread rolls nestled in among tiny rocks. We started with beef tartare, sour cream, pickled radish and beets, with veal extract and beetroot reduction poured over, and this went with Special Cuvée Brut Bollinger. 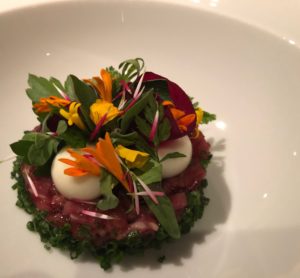 I am not joking, it really was Champagne the entire way. We progressed on to Blanc des Blancs Brut Ruinart, and thence to 2008 Grand Vintage Brut Moët & Chandon, and finally to Rosé Terroirs Brut A.R. Lenoble – Damery (some probably went on further but I left as soon as the cigars, hand-carried from Havana by Xavier Destribats, appeared).  And what else did we eat?  Well, the menu went on to yellowtail mackerel with marinated mushrooms, brown butter cream, caviar of char and lime leaves infusion. Next came fried seabass with steamed fennel, fennel cream, and tomato mussel broth. There was only one dessert listed, a plate with an individual Manjari (Madagascan 64%) chocolate soufflé, raspberry-thyme sorbet, vanilla foam, and caramelized and salted chocolate, but as I was leaving at least two other desserts were arriving. 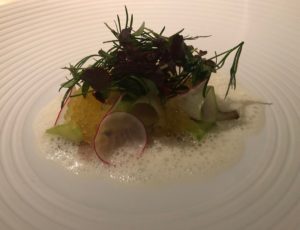 .. and his yellowfin tuna

I may have said it before but Amanda Elder certainly does know how to throw a good party (another unmissable IHIF/ITB event, for those lucky enough to be on the annual list, is the Tuesday night family-dinner that Servotel hosts in The Grand, an old-East-Berlin relic of a house with still-battered walls but superb food to complement a genial group of conversationalists).  I do wonder how many mega bashes today’s top travel professionals can take.  Years ago Travel&Leisure was renowned for its party, as were One&Only and Ritz-Carlton. Frankly, what Kempinski did this year showed that a luxury hotel can truly differentiate. AND IF YOU WOULD LIKE TO SEE AMANDA ELDER INTRODUCING HENDRIK OTTO IN THE ADLON KEMPINSKI’S LORENZ ADLON KITCH, SEE THE VIDEO BELOW