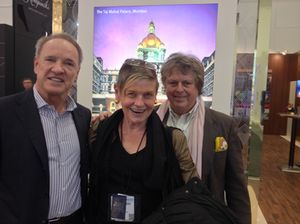 Reinhard Modritz, left, and Peter Finkbeiner at the Taj stand

When in Rome, do as Romans do, and by that token when in Berlin, during the back-to-back IHIF and ITB, the gal must at least make a token appearance at the show.  For those who have not been to ITB, don’t, unless you really have to.  It is a nightmare of more people than you can imagine, and some do come from luxury hotels.  For decades hotel groups have had stands in Hall 9, and this is where those interested in luxury hotels gather, people of the calibre of Reinhard Modritz, absolutely THE best arbiter of German luxury travel who is a mainstay of ILTMs, and his compatriot Peter Finkbeiner, of Peter Finkbeiner Publishing GmbH. 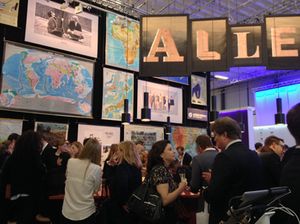 Is this the Design Hotels stand?

But with the years, and changes in distribution, fewer and fewer hotel groups bother to take stands.  There is no sign, in 2014, of the newly-named Belmond (until March 10th, 2014, Orient-Express).  Where is Four Seasons?  Interestingly one of the biggest hotel stands is for Paramount Hotels and Resorts which, bless them, do not even have one hotel open yet….  The consortium Leading Hotels of the World has no stand – President and CEO Ted Teng says that it was not, in the past, used for business but for meeting people.  Preferred, on the other hand, does have a stand and both its founder, John Ueberroth, and his daughter, company President Lindsey Ueberroth, are there, celebrating ten years of Preferred. 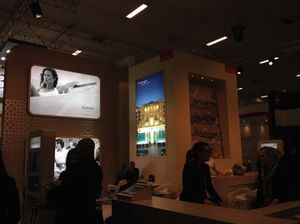 Design Hotels also, I think, has a stand but honestly it is impossible to make out whether it is them or not. By contrast, the big multi-brand groups, Hilton, Hyatt, IHG, Marriott and Starwood, blare their names and logos so large that you can see them from the other end of the hall. Fairmont, Raffles and Swissôtel now sensibly co-exhibit, as FRHI. One&Only is as stylish as one could imagine.  But in the main hotels are in retreat, at ITB.  The space in Hall 9 is increasingly falling prey to yet more car rental companies and bookings set-ups. There are as many digital companies here as the library of apps for your iPhone 5. 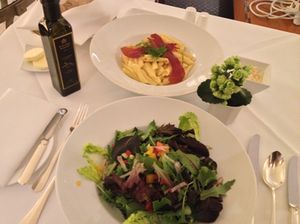 Stylish, salad and penne carbonara at the Adlon

I too am in retreat from all this hubbub.  I head back to my temporary home, room 518 at the luxury Adlon Kempinski hotel, and order up what turns out to be absolutely one of the ten best penne carbonaras in the whole wide world, with air-dried bacon and prosciutto, white onions and Parmesan.  With a salad, and the house wine (Adlon Oblige 2011, Philipp Kuhn Pinot Noir Laumersheim) I am in ITB-going heaven, away from it all. I only realise afterwards I should have ordered the curry sausage that the Adlon’s GM, Oliver Eller, made in the recent Kempinski GMs’ cook-off…