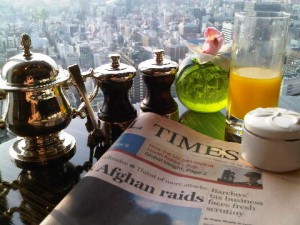 Where is the best cup of breakfast coffee?  The one – sorry two – that the gal had in the 37th floor Horizon Club of Shangri-La Hotel Tokyo remains one of the best-ever.  Yes, of course it helped that it was brought by a smiling young woman in a chic silk jacket and it was piping hot but still, the taste, OH the taste.

Made in a WMF machine, it had freshly-ground beans of Shangri-La Original Brand (Rainforest Alliance) coffee, 60 percent Colombian and 20 percent each Brazilian and Peruvian, all organic.  Brilliant.  I sat at my table looking out at the area around Tokyo Station and thought, again, what a lovely way to start another day, here in yet another memorable luxury hotel. 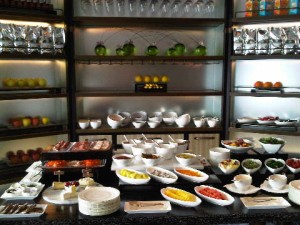 This was deemed TripAdvisor’s top hotel worldwide in 2011. It is right next to Tokyo Station, so it scores high on location, and on product (the 200-room hotel is part of the Marunouchi Trust Tower).

Attention to every detail helps. Room 3318, a corner room with two big windows, both with wooden window seats, has a big enough desk, plenty of sockets (and adaptors provided) and a stationery kit that includes the pair of scissors that every seasoned traveller wants.

There are three different smells of bath salts. You can find everything, and manage the light switches and the shower.  All this is not rocket science but it is amazing how many owners and designers get it all, or some of it, wrong.  Here nothing grates.  Back to the club lounge.

It is large enough, the tables are high enough, the display of food is big enough.   There is a big cupboard at one end of the room that opens up at breakfast to reveal displays of some of the ingredients used, including the coffee. 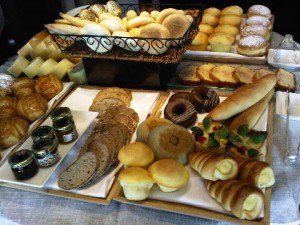 A separate table holds a selection of breads

The food is tasty.  At room service dinner (Peugeot salts and peppers, butter in a covered china pot and fine Narumi china), the salad had over a dozen different types of leaves, and the bread selection came in a round silver bowl held in a linen-covered hot circle.  In the lounge at breakfast, breads, on a separate table, are freshly baked and there are lots of really healthy ones.

Club lounges all too often have a complimentary breakfast that is a paltry shadow of what is generally available in the main restaurant but here this is all good stuff.  Again and again I have looked at a club breakfast and then opted to pay to have a proper breakfast in the main restaurant, but here I was well satisfied, and the home made yoghurt was almost as good as the Azeri ‘white gold’ that I started every morning with in Baku last week. 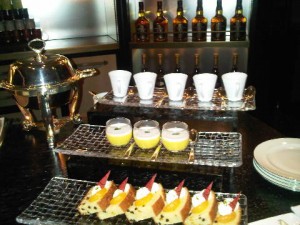 The same cupboard is opened for evening cocktails, to display bottles, and snacks in front

Clubs should also have plentiful supplies of today’s newspapers, but at Shangri-La Hotel Tokyo copies of both the Financial Times and the International Herald Tribune had already been delivered to my door without my having to ask.

I was not therefore using the club lounge to its full worth – and I was not able to enjoy cocktail hour properly, when the same end cupboard is opened up to reveal, as if by magic, displays of liquor bottles. A big silver bowl holds open bottles of Royer Champagne and a selection of white wines. 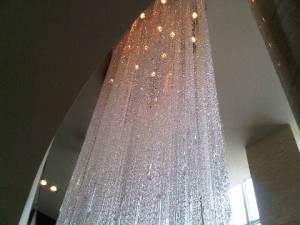 A cascade chandelier hangs in the stairwell up from, and below, the 28th floor lobby

The hotel is owned by the Mori Trust, and is mainly designed by Hirsch Bedner, though the two restaurants, the Japanese Nadaman found in so many Shangri-Las and the Italian Piacere (‘pleasure’) are by André Fu, the teenage-looking academic who did the gloriously avocado-hued Upper House in Hong Kong.

Some of the features throughout the hotel are outstanding.  Down the stairwell up and down from the 28th floor main lobby hangs a waterfall chandelier of thousands of pieces of crystal, designed by Jitka Kamencová Skuhravá of Lasvit, Prague.  How on earth do they clean this thing?

Just inside Piacere there is a white Murano chandelier, and in the main room of the restaurant there are three giant golden chandeliers, just in case the ladies-who-lunch there with such joy and so regularly need something above their heads to talk about. 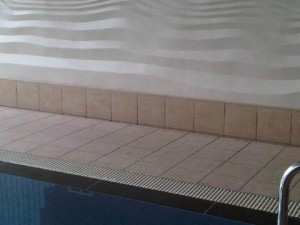 Of course I headed for the gym, which technically opens at 0630 but the super-alert night manager walked as fast as one can without technically running to open it up for me before that.  You look out, when working out, over the swimming pool, with its 29th floor view of the city – by complete contrast, one end of the pool room has a wall emulating sand dunes.  Swimming my laps, I think back to the pristine sand of Fukuoka. But then everything in Japan is pristine.  Three days so far and number of pieces of litter seen – zero. 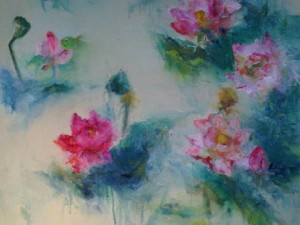 Flowers, a painting hanging on the wall from main lobby to the elevators

There are flowers everywhere.  Single orchids adorn not only club lounge tables, but the shelf in the bathroom of 3318, and room service orders.  At both basement-floor car entry and ground-floor pedestrian entry, massive flower displays sit under ceiling-hung crystal swags.

There are flower paintings on the corridor going from the 28th floor lobby to elevators up to the guest floors, rising to the 37th floor of the Tower.  As the gold-tasselled bookmark by my bed at night turndown said, using a quote from James Hilton’s 1933 tome Lost Horizon: ‘Conway was physically happy, emotionally satisfied and mentally at ease’.