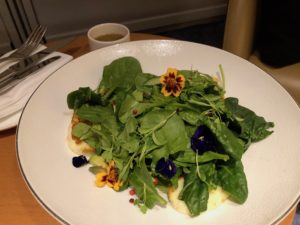 Ever want to go up in the luxury hotel world, physically and, as an add-on, mentally? Well, it is easy in Asia, say rising to the 118th floor of Ritz-Carlton Hong Kong, and to lesser extent in the Middle East. In Europe one property stands supreme, Shangri-La At The Shard, London. The gal arrived at night, but one of the first impressions was how striking so many internal images are – see a shot, above, taken outside an elevator going from the 35th floor reception up to a 48th floor room. Another memory was a really welcome midnight snack, which, with a make-your-own gin-and-tonic (both lemon and lime slices provided, with a giant bucket of ice) was honestly just what a sensible doctor might have prescribed. 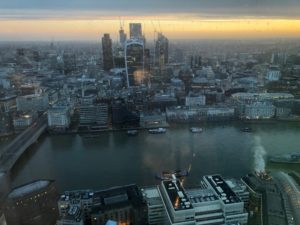 A few hours later came the dawn and the full glory of the location became apparent. The 302-room hotel is a few yards south of the Thames, and the all-wall windows reveal a fantastic view of London’s skyline – it is not surprising that this is increasingly a venue for anniversary staycations as well as birthdays. It is also, says GM Paul Brackley, who himself moved across London from The Beaumont, attracting more and more senior business people realising how easily they can get to their offices from the London Bridge underground (subway) station, three minutes’ covered walk from the hotel. And Paul Brackley told me indeed about a recent, now loyal, business guest who was initially attracted by the property’s wine list. 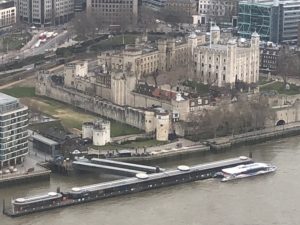 The Tower of London

I did not have time to study the Haut-Brions and Margaux but I was impressed by the charming cocktail menu from Gong bar, up on the 52nd floor. Titled Director’s Cut, it is actually more a book, with drawings of such famous movie names as Peter Jackson, here celebrated via the History Became Legend drink, starring pinecone honey, New Zealand pine wine and other ingredients. Sadly, Gong, designed by André Fu, was not surprisingly closed when I went up to the 52nd floor at six (a.m.). The Technogym is up there, and having games on the screen meant I could work out in my ideal multi-mode capacity, using calories, listening to the news, playing Sudoku and, uniquely, looking down at The Tower of London. 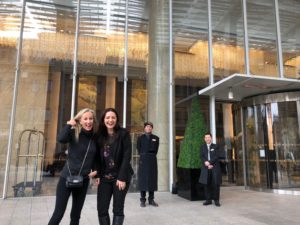 Breakfast is far down, physically, on the 35th floor. As a video below shows, this is indeed a copious feast, ideal for gourmet hotel guests as well as being a regular venue for sensible local business people who understand the generations-old recipe for success, namely breakfast like a king (or queen), lunch like a lord (or lady) and dine like a pauper. Well, having snacked like royalty, at midnight, and breakfasted to satisfy both a king and a queen, I had to leave this luxury hotel, and come back down to the real world. And there, on her day off AND about to move house in a couple of hours’ time, was my dear friend Andrea Greybanks, come in specially with a colleague to say goodbye. How about THAT for a lasting memory? NOW SEE VIDEOS OF MY ROOM, AND BREAKFAST