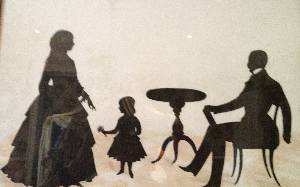 A silhouette picture on the wall of Room One, Summer Lodge

A woman used to know her place.  Look at this silhouette of a family scene, around the dining table, one of two hanging in Room One (the Master Bedroom) of the luxury hotel that is Summer Lodge, in Summer Lane, Evershot, Dorset – as deep in rural England as you can get.

The art of cutting silhouettes was already a skill across Europe before the French Revolution and silhouettists, as they were called, were often asked, as if dwarfs, to entertain royalty.

They, the artists not the royals, would cut out profiles of people at balls and other events, capturing the latest fashions and elaborate wigs. The gal loves the two silhouettes at Summer Lodge. 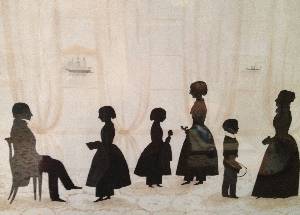 Showing the importance of Papa in those days....

Silhouettes were actually named for the Finance Minister of France in the 1760s, one Etienne de Silhouette who, oblivious to the parlous state of the French economy, was engrossed in his hobby of – cutting out paper!

Today, you get a fascinating idea of social history by looking at silhouettes, the body language of the players, the large sizes of the families at that time.  Room One, like all 24 bedrooms at Summer Lodge, has its fabric-covered walls littered with art, some of it incongruous.

I also had two faux portraits, aristocrats dressed as peasants, mid-19th century. And I had gigantic hardbacks on Cézanne, Palladio and the photographer Horst Horst, and (polysyllabic) local magazines… 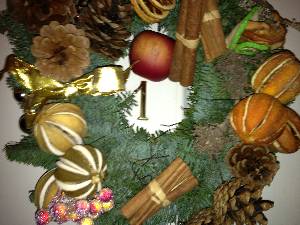 Christmas wreath on the door

Room One is 27 carpeted stairs up from the ground floor.  The wood banisters are embellished with fir-tree and dried fruit trails, all decorated by the hotel’s versatile gardener, John, who has also produced different wreaths for each bedroom door.

Open the door and the size of Room One, about 25 by 25 feet, is revealed, as is the huge bed, with a central canopy over from which hang four diagonally-set curtains, one falling to each corner of the bed.  I have two bathrooms, one with a separate toilet room that has its roof covered in pleated fabric like the inside of a tent. 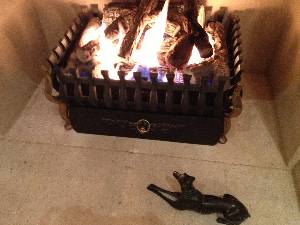 Bliss oh bliss, Room One also has a working fireplace, faux but the logs look really good, really authentic.  I put the little metal dog on a coffee table by it, the fire.  It looked natural.

I have always blessed fires in rooms since first encountering them at Four Seasons Resort in Scottsdale AZ even when the temperature was about 80 degrees outside. Ones that you do not have to light yourself are much easier – love the fires in the rooftop suites atop Mandarin Oriental Geneva.

There is so much to love here in Room One.  I have an electric towel rail, bliss for drying the bikini after yet another (this time early morning) swim, and the piles, literally, of towels and the big choice, literally, of pens and pencils, standing on the desk.  This is all luxury. 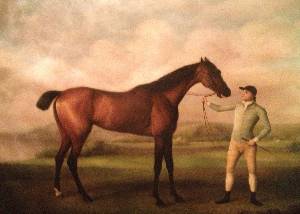 A Stubbs-like painting on the wall of the staircase

It is time to wend my way down to breakfast.  Going down the stairs I head past the cricket scene and numerous other oh-so-English paintings, including various Stubbs-like horses and riders, or horses and grooms.

If you want to make something look English, feature cricket, and horses, and dogs, and gardens..  And make sure you have a good breakfast spread.  Here, the basket of cereal packs includes Dorset Cereals, so good they should be given some kind of award.

The yoghurts are from Tim’s Dairy in the Cotswolds, owned by the Timotheou family.  The breads are from the Evershot bakery, just down the road from here (the best butter I have discovered recently also comes from only 20 miles away). 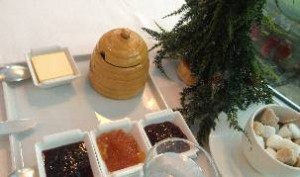 Corner of the breakfast table with a miniature tree

There is porridge, and the full-cooked English breakfast, or smoked salmon on the buffet, which also has cheese, and prunes. There are little portions of home-made jam, and a jar of Marmite (‘you either love it or you hate it’) and the coffee comes good and hot, and strong, and the toast is linen-wrapped in a basket.

And is there honey still for tea?  Sorry, gal, it is only just after breakfast, and it is time to leave this luxury hotel.  Where to, next?