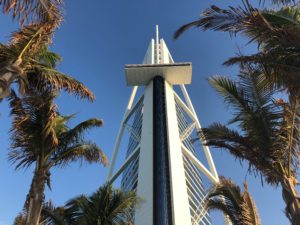 What, honestly, is there left to say about Dubai’s iconic luxury Burj Al Arab resort? Actually, admits the gal, there is quite a lot.  Within the last few months there has been a brand new MD, Tony Costa, who has carefully listened, not rushed in too fast but, all the time, carefully thought what he will do to bring the 1999-vintage property up to the present (goodness, you might well say, do you mean the 202-key, all-suite hotel is not only coming up to its 20th birthday but is also last century?). Thanks to the unique exteriors and interiors, above, by Tom Wright, WS Atkins and John Cherrington, this is a truly timeless 28-floor structure. 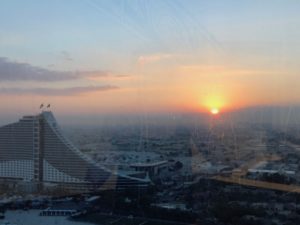 But time passes.  I looked out of end suite 1111 across, at sunrise, to sibling resort Jumeirah Beach Hotel, just finished an interior upgrade (less sock-it-to-you, more subtle colours).  I looked down, to a party from Guangzhou or Guilin taking selfies outside ‘The Burj’. Even at the eternal site-of-style that is the Burj everything evolves. Two years ago a gigantic deck was floated here, from Finland, to add outdoor pools and lounging areas, cabanas and another restaurant.  Two months ago a camel was hired, on a part-time basis: three days a week he arrives, from his desert home, in the back of an open truck to give rides across the Burj’s approach bridge, hotel guests only (consensus, clever marketing plus brilliant photo opportunities). 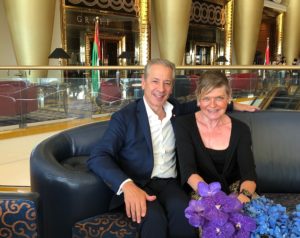 There is more to come, but neither Tony Costa nor his boss, CEO of Jumeirah José Silva, is giving anything away.  Both believe that actions are more vital than words and both, crucially, belong to that small group of luxury hoteliers who truly understand that luxury, with its endless myriad of details, ultimately makes money (this is the opposite of the a growing industry global norm, by the way, which sadly tends to see short term profits, partly accrued through cutting luxury at every corner).  At Burj Al Arab, which will attain 68% average occupancy this year, 40x% of guests are repeaters, who tend to stay about seven nights, versus first-timers’ three nights. 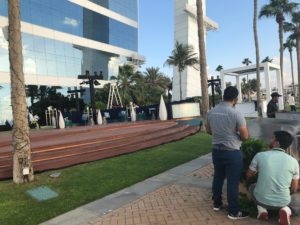 This is Dubai’s luxury hotel that weathers any downturn, and the current over-supply of rooms has no effect here.  This is also the venue for such big global events as the annual Ultras, held for the first time in Dubai on November 21st, 2018.  Why did they move here?  Well, Dubai is increasingly seen as the centre of world luxury travel, says the Ultras’ Chairman, Nick Perry.  As evidence of this, both he and Chris Hartley, CEO of the Ultras’ main sponsor, Global Hotel Alliance GHA, live in Dubai.  On that night, however, many other world players arranged, on purpose, to be in town, and showing how ‘the Burj’ evolves, the evening was launch for a brand new event space, that looks set to become one of Dubai’s hottest tickets. SEE SUITE 1111