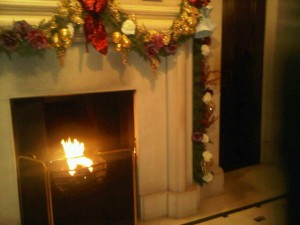 Year round, day in, day out you are greeted at The Lanesborough London by a blazing, real-log fire. Come up to the front door, see Dominic Mullen or one of his fellow doormen (the guys in the long grey coats, grey bowler hats, pink rosebuds on their lapels).

They open said door, and as the gal goes in the said fire is on your left.  It gives a lovely warm feeling, especially on a raw London day at the beginning of December.

The bedrooms at this luxury hotel also make you feel warm and cosseted (this is one of the few-few hotels where the bedrooms are rated, on www.kiwicollection.com, as 10/10 – this is a verified site, by the way, which means it is guaranteed that the reviewers have actually stayed there, unlike some not-to-be-mentioned sites beginning with T where, it is said, anyone can and sometimes does put up unauthenticated comments). 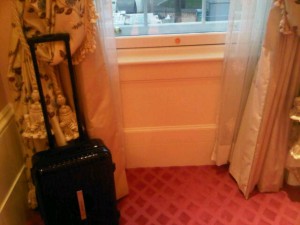 The Porsche-Rimowa wheelie at home, room 118

Room 118 is very new, only a few months on stage, so to speak.  It has been created, by the GM Geoffrey Gelardi, with the help of designer Alberto Pinto and lots of talented craftsmen, out of an empty space above a seldom-used staircase.

118 is rose pink: its siblings, for this is one of a quartet of new rooms, are other colours.  118 has rose pink carpeting, and palest pink walls rising to a tall white moulded ceiling. Love the curtains at the pair of tall windows: the main curtains are dark beige, heavily over-embroidered with flowers, and the pull-across curtains are plain, paler beige. 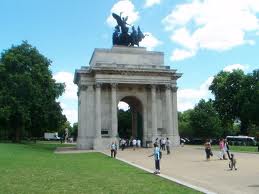 Look out at Wellington Arch

Look out at Hyde Park Corner, with its centrepiece of the Wellington Arch, also known as Constitution Arch, designed by Decimus Burton in 1828 as a tribute to Sir Arthur Wellesley, first Duke of Wellington.  It was originally, apparently, crowned with a giant statue of the Duke on horseback but in 1882 a road widening scheme meant the arch had to be moved.

The statue was ‘replaced’, many years later (1912) by what is known as the Quadriga, four horses with the figure of Peace by Adrian Jones.  This was the largest bronze in England at that time and apparently before it was installed Jones hosted dinner for eight in the hollow, boat-shaped body of one horse. 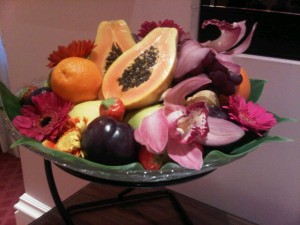 English history abounds at this unique hotel.  I have visited former telephone exchanges (Hotel Monaco, Seattle, and the new Hilton The Hague) and former jails (Hotel Liberty in Boston MA, Malmaison Oxford).  I have visited two former English eye hospitals (Chapters, Exeter, and Malmaison Birmingham). But this is a first, staying in a ex-general hospital.

It was Gelardi who helped create the hotel, with the help of then-Rosewood group boss Atef Mankarios, Landor brand specialists – and oodles of money. Gelardi put together a great team. Dominic Mullen has been here since the start, 21 years ago, as have chef Paul Gayler and the amazing Gelardi himself. 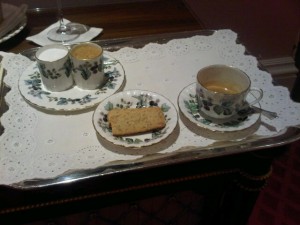 And a 'cup of coffee'

Back to my room. A female butler, asked for coffee, brought an antique silver tray with linen mat and stunning English porcelain, specially for the hotel (it has a blackberry pattern, oh so English, just like the shortbreads that came too).

I was only sorry not to be eating more. 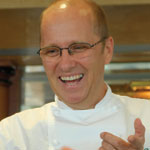 Heinz Beck, chef and, in his spare time, artist

Heinz Beck, who runs the Michelin-starred Apsley’s restaurant in the conservatory here, is one of any Cucina Italiana lover’s favourite chefs – his main base is Pergola, atop the grandiose Cavalieri above Rome.

He has had three Michelin stars there for the last seven years without a break.  I first met him at Le Touessrok when he was guest-cheffing and he surprised me with dinner-for-two on my balcony.