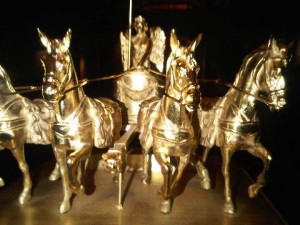 This gorgeous gold statue of the Quadriga is 11 inches tall, weights 11 pounds total, is plated with .999 gold and it stands on white Carrara marble. Hand over a mere 4,500 euros and it is yours, gal.

You would then be one of only one hundred owners of the commemorative statues cast to honour the one hundred years of the history of the gorgeous Adlon Kempinski, Berlin – the Leading Hotel that is, together with its neighbour, the Brandenburg Gate, and a few other icons (the Victory statue and the Reichstag, with its glass Norman Foster lid) symbolic of Berlin, capital of Germany.

Look out of room 518, my home this year and last at the Adlon during the International Hotel Investment Forum IHIF and the following mega-active ITB travel trade fair, and one sees, directly below, Unter den Linden, once a boulevard of linden trees that led to the Prussian royal palace.

To the left is the Brandenburg Gate, entrance to Unter den Linden, commissioned by King Frederick William II as a celebration of peace, and built by Carl Gotthard Langhans from 1788 to 1791.

After World War II damage and the subsequent partition of Berlin, the gate was restored by 2001 by the Berlin Monument Conservation Foundation.  It is now closed to traffic.  Atop is the real Quadriga, designed by Johann Gottfried Schadow in 1703, later seized by Napoleon and taken to Paris (how, in his hand baggage?).

Now for history on the iconic seven-floor hotel itself.  It was built 1907 by Lorenz Adlon, who used designers Carl Gause and Robert Leibnitz.  It was razed by fire in 1945, but the rights to the name were bought by legendary hotelier Karl-Th Walterspiel.

Kempinski bought the building’s ruins.  They sold on to Dieter Boch’s Avanta.  That outfit sold on to the hotel’s present owners, Fundus, led up front by Anno-August Jagdfeld and his wife Anne-Marie Jagdfeld (a talented designer – love what she has done in London, for the St James’s Club).

The 383-room hotel is ‘owned’ in fact by over 4,000 small shareholders, which could be one reason why the ceremonial lobby is always filled with aficionados, having afternoon tea or just a gossip.

Arrive in a BMW, with seat-back GPS satnavs and massaging seat back

And what a lobby it is. You are driven to the hotel in a BMW with back-massage seats, and GPS sat-navs on the backs of the front seats (Kempinski has a worldwide partnership with BMW and the Adlon also has courtesy BMW bicycles for cycling around town).

A young guy in a full-length dark grey coat helps you out of the car.  You take four red-carpeted steps up from the Unter den Linden pavement, go through a glass revolving door and you find, overhead, three metre-wide inverted parasols, glowing amber glass.

Ahead, the two-floor lobby’s central piece is a ten-foot black metal ‘Asian tower’ guarded by carved elephants with real tusks.  Around, the seating is beige and brown, subtle and discreet and oozing money.  During this last week – think the aforementioned IHIF and ITB – the hotel was completely full, with most arrivals on Tuesday, most departures Friday morning.

Ladies in Red stand by welcoming glasses of bubbly (from magnums, of course)

Whenever, you are greeted by one or more ‘ladies in red’.  Every Kempinski hotel and resort worldwide now has them.  The idea of former New York producer and events guru Bruce Tallon, putting a lass in luscious scarlet says Hi, Welcome.

It certainly puts a smile on all concerned – particularly as, in the case of arriving at the Adlon, they offer you a glass of bubbly, poured from a magnum of course (all the Adlon’s wines-by-glass are poured, in front of you, from a two-bottle size, oh so stylish).  You are taken to your room.

The old, cumbersome metal keys with hanging pressure-sensitive panels needed to activate elevators have been replaced by 21st century proximity, or pressure, keycards.  Press yours to the elevator to make it work.  Press it to the door of your room, to open it.

Within, you have a circular foyer, walk through to bedroom, right to bathroom, right through toilet and back to foyer.  Lots of wood. Old gold colouring. Big desk. Free WiFi or fixed broadband. Illy espresso machine.  Fruit changed daily. Steam shower with big-size Molton Brown (and tops unscrewed to save my time), electric towel rail.

Every gym should have'em, plenty of water, plenty of fruit, assorted weight sizes

Love a heated towel rail, should be essential in all luxury hotels.  A gal on one-night-stands needs to wash her knickers, and dry her bikini.  Room 518 is really handy for the elevator down to the basement fitness area.

The pool, all of 45 feet, is fine for you and one other, otherwise it becomes a bit too cosy.  A sculpted lion head greets you at the far end, a bubbling Jacuzzi is to one side.  Brilliantly, invisible non-stick globules, like sugar crystals, stuck firmly on the marble surround to the pool prevent you, or little kids, slipping.  An awful (sic) lot of German visitors seem to while away a long time lying nearby on white towel-covered beds, presumably recovering after sauna-ing.

The fit prefer to preface a swim with a good work out in the gym, double size from earlier times so now there are three joggers, two ellipticals and so on – all Technogym, thankfully.  A green nature-scene mural one end matches a green pilates (Swiss) ball and a tall glass jar of green apples.

Food at the Adlon.  Well, there is a big choice.  Go for masses of Michelin stars, at Lorenz Adlon Esszimmer (Chef Hendrik Otto), uma (Japanese) or Restaurant Gabriele (Italian), or join some of the 700-odd members of the China Club, a stunning two-floor Asian emporium overlooking the Jewish memorial and the fine arts museum.

The terrine slice was stylishly carved, in front of the table, from a long 'loaf'

All these restaurants front on to the rear road Behrenstrasse, parallel to Unter den Linden.  The typical hotel guest probably does not even know they are there, unless he/she reads the guide to services and, frankly, how many people do (three percent, perhaps?).

The typical hotel guest does see, and probably uses, Quarré, the all-day restaurant leading off the lobby.  Sit looking out across Pariser Platz at the Brandenburg Gate.

Quarré’s breakfast buffet is sensational, there is a quick-eat business lunch and, at dinner, I was particularly impressed by the fact that a terrine was presented, as a 15-inch loaf, before a slice was carved off.

But then Adlon’s cuisine is always impressive (the bite-sized smoked salmon tarts at the Evening of Pure Gold party three nights ago were addictive).

Free wakeup coffee - a golden end to a great stay

Sometimes a GM will be there to see a guest off. But no-one could expect that magnificent hotelier from Hamburg, Oliver Eller, to be around when the gal left.  Her 0430 wake up call was, frankly, horrid.  But what made it memorably gorgeous was when she asked, last night, to be awoken, the telephone operator said ‘would you like a reminder?’ and ‘would you like complimentary tea or coffee?’.

Note the thought, and the thoughtfulness of letting me know it was free.  Sure enough, the 0430 call, in a nice voice, was followed by an 0445 call, same nice voice, and, at 0446, the doorbell rang. There stood a well-groomed guy in his 40s bearing a silver tray, linen-cover.

The silver coffee pot, under a linen tea cosy, came with a paper holder to stop one’s delicate fingers being burned while pouring the said liquid. Lasting memories are the first point of contact – and the last.  This was super-style.