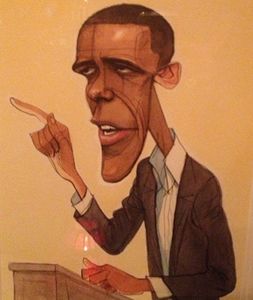 The President graces a wall of Off The Record bar

The gal has recently covered two of the Founding Fathers, first William Penn and then Thomas Jefferson.  Now it is time to turn to the leader of the great U.S.A. today, none other than President Barack Obama.  It is pretty difficult to see him live.  Stand in Washington D.C.’s Lafayette Park, to the immediate north of the White House, and you see tourists from all over the country and the rest of the world, but you are unlikely to see the man himself.  Advance a hundred yards further north and you are at the southern end of 16th Street.  To your right is St John’s Church, where he goes to worship.  To your left is a unique luxury hotel, The Hay-Adams, and there you can at least see ‘him’, as one of the many caricatures that cover the walls of Off The Record bar. 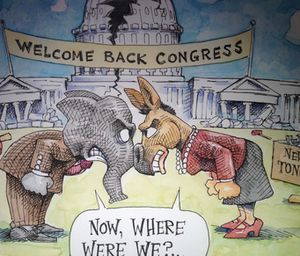 Another of the priceless cartoons

Of course the bar has the nooks and crannies that any Washington institution offers, for lobbyists and politicians to meet without anyone overhearing what is said. This is the best place in town to be seen but not heard. Forbes.com rates it one of the best bars in the world… the art works, by the way, are on loan from the Library of Congress and no, they will not walk as they are heavily secured to the walls behind. Off The Record is a symphony not only of art but deep red colours and lots of wood and oodles of character. 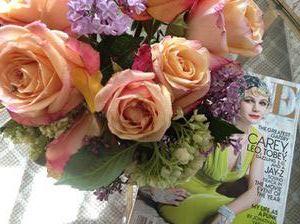 There is colour galore in some of the stunning flower arrangements throughout this 143-room hotel (a member of The Leading Hotels of the World). I would definitely opt for a south-facing room, for best views down through the Park to the White House. Corner suite 512-4 also looks out across to St John’s and, a big plus for today’s lifestylers, there are two complete bathrooms.  Well, many couples today have separate bathrooms at home so surely hotels should do the same. Question, do you or your travel agent ask how many bathrooms a room has before making a booking?  Rooms here are elegantly natural, with taupe and stone the dominant colours, and curtains, same colouring, showing 18th century rural scenes. 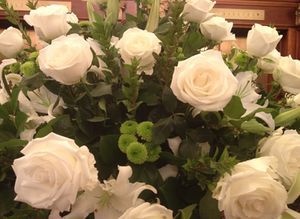 As you enter the hotel, the lobby is dominated by a flower arrangement, a giant bubble of flowers that could be a contender for the largest wedding-type bouquet in the world.  Its sweet smell hits you, in the nicest way, as soon as the door is opened, perhaps by the Guatemalan who seems to work 24 hours a day.  This is not a lobby, by the way, to sit and show off in (if you want that, in Washington, head three blocks south-east to W Washington or its neighbour, the Willard InterContinental, the one that wants the return of the century-old Willard chandelier now reposing in The Jefferson). This is an intimate lobby, with two panelled elevators taking you up, or take the corridor round to Off The Record, or the carpetted stairs to the left leading to The Lafayette restaurant. 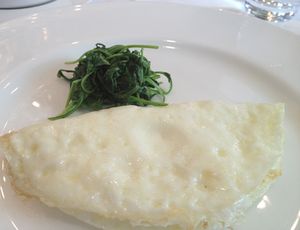 The Lafayette, overlooking Lafayette Park, is the height of elegance – it even has a grand piano. Whatever meal we are talking about, there will be movers and shakers at a nearby table. Lots of carpeting and lots of heavy curtains, in muted colours, means great absorption of sound, obscuring what anyone is actually saying.  What a pity… but this is movers and shakers’ town (ever curious, I see ‘movers and shakers’ was first coined by Arthur O’Shaughnessy in his 1874 poem, Ode). Ever curious, I try that American penchant, an egg-white omelette. Pour thick, heavy olive oil on it and it actually becomes quite delicious, but I do wonder what happens to all those egg yolks.  This is the hotel, by the way, that has a sensational rooftop, covered in but you feel ‘sky-high’.  This is where Thomson Reuters and Yahoo hosted brunch for 350 last Sunday, April 28th 2013, the morning-after party to follow the formidably important annual White House Correspondents dinner – at which Obama showed yet again what a brilliant orator he is. 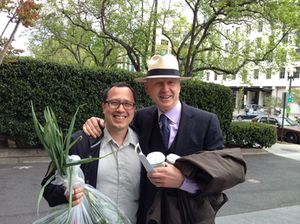 Hans Bruland, in hat, and Jamie Montes De Oca return from the farm

On my way out of hotel  I run into the dapper Hans Bruland, the one-time chef who so stylishly runs this luxury hotel.  He is with Jamie Montes De Oca, his Puerto Rican chef, and they have been visiting a 140-acre farm outside the city, run by the University of the District of Columbia, College of Agriculture, Urban Sustainability and Environmental Science, exclusively to farm ethnic and specialty crops. The hotel’s partnership with this operation gives it a supply of veggies I have never heard of, things like avuvu, kitely and sawa sawa.  Lots more eating to do, gal – wonder how these would go with an egg-white omelette?