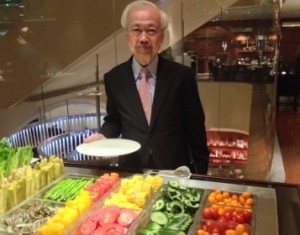 Robin Liu at the salad bar

This is Robin Liu, an institution in Taipei and among foodies throughout the entire region. Why? He is Senior Director of Robin’s Grill – Teppan – Lounge and yes, this complex of eatertainment at the luxury Regent Taipei hotel is indeed called after him. He greeted the gal, made sure she had super service and came in specially, the following day, to bid her farewell. In between he will be supervising the various eating and drinking areas and also overseeing the salad bar which, as you can see, is more of an artistic arrangement of fresh organic leaves and vegetable products. 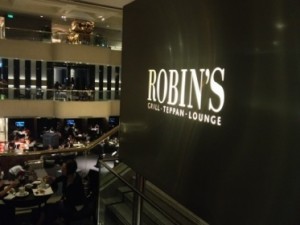 The eatertainment complex is called after him

Robin’s Grill – Teppan – Lounge dominates the rear part of the lobby of this busy 550-room hotel. Go there for the wine list, for a tasting, or for steaks, or just for the salad bar. Sit in the brick-walled Grill, which does indeed have an open grill, and you are presented with a leather-bound menu that is in itself an education in meat. There is Wagyu 9+ from Tajima fullblood stock, and also from the Sher family ranch in Ballan, Victoria. There is US Prime, which you can choose in sizes up to a bone-in 60 ounce special. 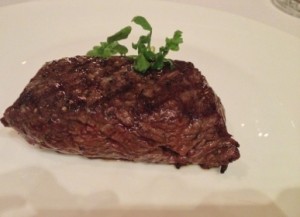 I go for what is marked as Robin’s Signature, a US ribeye cap, eight ounces served absolutely simply, and gorgeously – I have already eaten more than a daily allowance of salad. As he pours a glass of Schild Estate Barossa Premium GMS Old Bush Vine Grenache Mourvedre Shiraz 2011, Robin Liu explains how his career started as a busboy in the American Officers’ Club here in Taipei and then he worked his way up, in Hilton hotels around Asia (his mentors were, not surprisingly, those great names, Richard Handl and James Smith). They would be proud of him now, as he presents different Laguiole knives, explaining their handles – I go for rosewood. 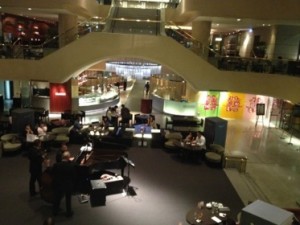 Look down from Robin’s to live entertainment below

Afterwards I look down, to the lower lobby (what IS this architectural feature called, when an enormous area of a ground floor is cut out to enable the ground floor that is left to become a kind of mezzanine?). Every day there is a buzz down there, a Brasserie buffet and lots of eatin’n’drinkin’, but from Thursdays through the weekend there is live jazz and boy, does this luxury hotel then really spring alive!