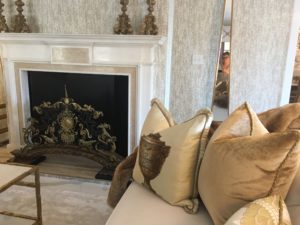 The 182-room St Regis Washington DC is one of those luxury hotels that has so many advantages, says the gal. It has 92 years of history, from its 1926 start, since when it has variously been called The Carlton, and Sheraton (it was restyled St Regis so the launch St Regis, in New York, could become ‘a brand’). It has had such legendary GMs as Ibrahim Fahmy, who left the US capital for another Starwood property in the capital of his birth, Egypt. It continues to have location, a few minutes’ from The White House, and incredibly long tenure among its 220-strong team. And it has one of the most impressive Presidential Suites anywhere in the Americas. 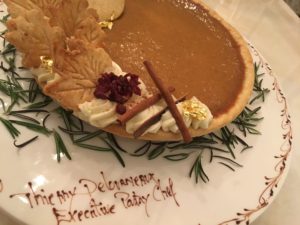 I had arrived the Night Before Thanksgiving, and just as before December 25th it was almost, but not quite, quiet as a mouse. Upstairs on the sixth floor I spent at least an hour looking around the space with 610 on the outside of its double door. This turned out to be that Presidential Suite, a total of 2,600 sq ft designed by Myron Wolman, who seems to specialise in mega apartments for lovers of quality who appreciate having embroidered Nobilis wallpapers, fur throws over golden sofas, and lots of gold candlesticks and sculptures sitting on occasional tables. The overall effect is absolutely beautiful, and in my case was enhanced by a welcome pumpkin pie signed by patissier Thierry Delourneaux: as it happened, that very morning while watching the jogging machine’s television in a gym in another hotel, I had seen the hosts of NBC’s morning show eating an identical pie, which also appeared on Fox News. 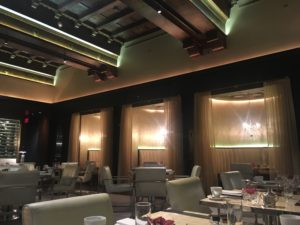 Peripheral alcoves in the restaurant

I also had an outsized carved-wood chess set, and an onyx dining table that seats ten. After the nightly 6 o’clock sabre performance (SEE THE VIDEO BELOW), dinner, as it turned out, was downstairs with Ramón von Schükkmann – guess my nationality, he said (I got it wrong, he is not Paraguayan but Dutch-Indonesian, from a serious catering family in The Netherlands, but he got diverted from weddings-for-a-thousand to marketing hotel rooms and selling patronage to aficionados). As we ate East Coast oysters, with a glass of Moulin des Vrillères 2016 Sancerre, by Karine, Christian and Kevin Lauverjat, he told me about his recent design-a-cocktail competition for local home-based travel advisors. As a result the winning Orange Lady will be on the menu here, at the bar, with its attractive ten-seat counter. This is next to the hotel’s one restaurant, designed by David Rockwell with popular peripheral alcoves (its new name is being reserved, to be unveiled by DC’s ‘top food critic’, apparently. The hotel is owned by Qatar’s Sheikh Faisal bin Qassim Al Than: one of the beautiful hardbacks in my suite was a guide to his museum, 14 miles from Doha – its 15 halls show over 15,000 items including his extensive collection of vintage American cars. 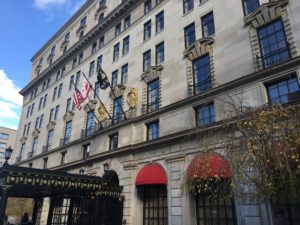 Outside St Regis Washington DC was a line of very-American hotel bikes, ready to borrow if it were not so cold. The French concierge told me proudly that the bikes are Shinola, launched in Detroit in 2011 by Fossil Group retail executive Tom Kartsotis, who bought the name of the country’s heritage shoe polish which, having been founded in 1877 sadly went out of business in 1960 (can someone explain how a footwear accessory translates into a method of transportation?). What my stay at this luxury hotel taught me how was that there is always something new. Now I know more about bike types. I also know that some gym equipment has sensational YouTube videos on the screens – here, the St Regis Athletic Club, open 24/7 of course, had a limitless selection of surfing videos, and psychologically at least, I got a lot of thrills from left-handers. NOW SEE A VIDEO OF MY SUITE AND, BELOW IT, THE SABRE EXPERIENCE