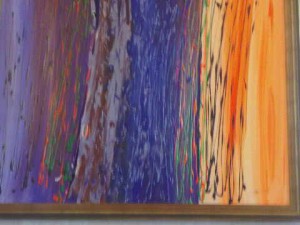 There is natural art around Abu Dhabi in the form of sand and dunes and beaches and the beautiful Arabian Gulf. Pride and joy of futuristic Abu Dhabi is the 27 sq km Saadiyat Island, which already has the no-bedroom Monte-Carlo Beach Club and two luxury hotels up and running, with more to come.

The gal was at Park Hyatt Abu Dhabi yesterday, now she is looking at other facets of the island, part of Abu Dhabi’s ambitious 2030 masterplan, which appears to have been spearheaded by Canadian planners.

When it is finished, Saadiyat Island will have eight miles of highway, six miles of light rail and the famous museums that have been a talking point since the moment they were announced.

Originally there were more, but the latest opening dates, announced by the Tourism Development & Investment Company, are 2015 for Louvre Abu Dhabi (designed by Jean Nouvel, the usually-stunning architect who somehow veered sideways with his Sofitel in Vienna), 2016 for Zayed National Museum (designer Norman Foster) and 2017 for Guggenheim Abu Dhabi (by the always-stunning Frank Gehry who came up trumps with the Hotel Marques de Riscal in Rioja). Until this trio opens, you have to make do with the art in the hotels! 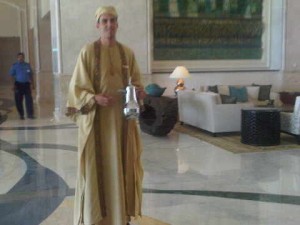 Coffee welcome (note the blue marble ‘waves’ on the floor)

St Regis Saadiyat Island Abu Dhabi has, like all in that brand, sensational art and trimmings.  Outside, admittedly, the building is rather like St Regis Laguna Niguel, back in the USA, but here the arms of the C-shape are opened up so every room has a view over the Gary Player links golf and beach to the ocean.  The arrival car, of course, is a St Regis-standard Bentley.

Inside the hotel, the elegant lobby is a homage to what marble can do – waves of blue marble streak across the sand-coloured marble that forms most of the area.  A tall bearer in desert dress offers Arabic coffee.  He stands near white orchid flower displays that are personalized with stems that have been painted the Tiffany blue that is the signature highlight of designers Hirsch Bedner’s look, here at the 380-room luxury resort. 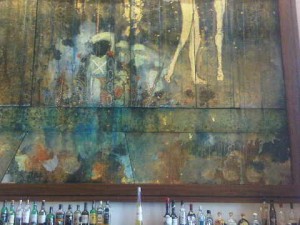 If you are an early arrival – and be warned, the airport operates 24 hours and some flights do arrive very early – if you are on one of those red-eyes, no worry.  Hotel GM John Pelling shows off, with pride, his early arrivals lounge, with outdoor terrace, shower and even a four-piece gym, with the latest equipment.

If you are really keen, of course, you could head for the main gym, which is two floors, a real showcase of Technogym and a two-court squash venue.   If you arrive later in the day, and you are keen on another kind of anti-jetlag remedy, you could head for one of the tea rooms serving a typical St Regis afternoon tea, or for the Manhattan Bar.

A formal gentlemen’s club-type bar is another St Regis signature, adapted from the bar at St Regis New York.  There, the King Cole Bar has a backdrop of a Maxfield Parish painting of King Cole.  Here, the Manhattan Bar has a modern collage of camels and other elements of the history of Abu Dhabi.  There, in New York, the original Red Snapper signature cocktail is now known generally as a Bloody Mary.  Here, in Abu Dhabi, the variant is an Arabian Snapper, tomato juice, vodka and zaatar thyme. 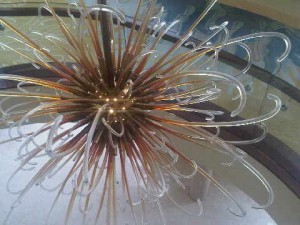 One of the many amazing Czech chandeliers at the hotel

Like every new place in the entire seven Emirates of UAE, it seems, the designers have incorporated the brilliant crystal chandelier work that can only be Czech – the style I first saw in Tokyo, at Shangri-La, and again a couple of days ago at Jumeirah Etihad Towers Abu Dhabi.  These are the chandeliers that rely on simplicity of ingredient shapes paired with complexity of joining together of those shapes.

Some of the chandeliers here are formed of central balls with hundreds of radii, some twisting and turning, each one individually set in position.  They arrive from Prague, apparently, in thousands of boxes, and are put together on-site.  Every finished chandelier has its own IPS and can be reprogrammed, on colour changes and the like, by its minder back in the factory nerve centre. 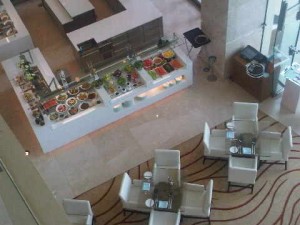 One flight of chandeliers hangs vertically, one above the other, in the stairwell leading down from the lobby to the lower-level Olea restaurant.  This restaurant is so fabulously designed, with outside terrace seating by the golf, or indoor by the many buffet stations, some with wave-like overhangs that change colours at night, that, with the quality of the food, attract discerning locals by the score.

At lunch, there were many tables of guys in pristine white thawbs, ‘boys’ one could say, talking business.   I ask how these thawbs, or dish-dashes as they are sometimes called, are handled.  No problem, the butlers supervise their laundering and pressing.  The challenge is they are sometimes so long they cannot be hung from bellmen’s trolleys.  They need to be held up, at arm’s length, to be carried to the appropriate room and hung up.  The St Regis butlers have been trained by a specialist based in Dubai. 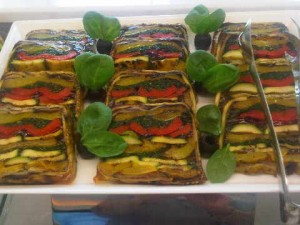 Judging by a simple buffet meal, the food here is fabulous – as one would expect when the head-honcho chef is Daniel Buss, who opened the Yas Hotel (the one that famously and uniquely straddles Abu Dhabi’s Etihad Airways Formula One race course, which once again will spring into action on November 4th, 2012).

I helped top off that hotel, with Daniel, and the GM and the man in charge of marketing it all and a bottle of champagne….  now no champagne, it is lunchtime, and the choice is everything from Chinese via Japanese and Indian to vegetarian, with a whole display of Arabic mezze.

I love the vegetable terrine, almost too beautiful to devour.  Next time I look forward to dining in the Grill, called ‘55/5’ for the address of St Regis New York – this venue has a mezzanine glass-walled wine cellar with a private dining table in the centre. 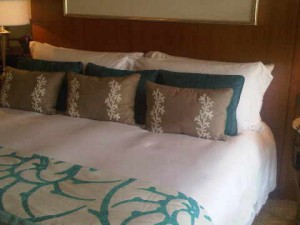 There are many St Regis touches, even at a resort.  Arrive at the Iridium spa and your watch is taken away, temporarily, so that you become timeless (and a Babor facial will help).

In your bedroom, the inside of drawers and the mini bar cabinet are paneled in bespoke leather; in some suites, the freestanding oval tub is by a window, and facing inwards you have one basin unit, a walk-through glass-walled shower, and the second basin unit.

Clever.  In all rooms, your bed is made up with comforter and cushions with the signature highlight, Tiffany colour.  Nothing is too much.