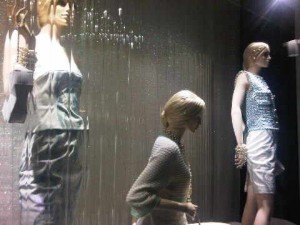 Is this the luxury hotel with the world’s best retail, a few minutes away?  Any other contenders step forward, but for now the gal gives the super-shopping prize to St Regis Bal Harbour, Florida.   Wow, less than a hundred steps from the hotel you have, in alphabetical order, Chanel, Ferragamo, Neiman Marcus, Prada and goodness knows what else…

As the Financial Times said on April 28th, 2012, Bal Harbour – 15 minutes’ drive north of Miami Beach, is South Florida’s answer to Monaco.   The retail, masterminded by one Danny Whitman, is on the site of a former prison.  But, and the pink paper did NOT say this, Bal Harbour is friendly and nicer and has this stunning new hotel.  We were invited to the opening party, six weeks ago, but sadly could not make it.

The 400 who came included CNN’s Wolf Blitzer and his wife Lynn Greenfield (who said all Washington DC parties would be boring after this) and St Regis (and Rolex) ambassador, polo giant Nacho Figueras who sabred a bottle of champagne, and at the end of Starwood boss Frits van Paasschen’s welcome speech, out in the lovely palm-treed garden by the sandy beach, it just began to rain a little, for good luck. 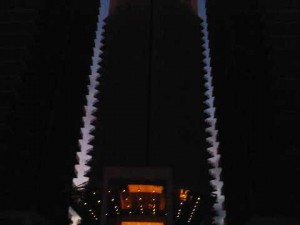 From Chanel (and other Bal Harbour Shops), look east across Collins at St Regis Bal Harbour, sandwiched between its sibling residential blocks, as the sun comes up...

It poured with rain, like a thunderstorm, for my arrival last night but who cared.  I swam in the heated outdoor pool and recovered from the flight. Today the sun is shining, but before it was up I was (up), and checked out all the retail across Collins Street.  Looking back at the hotel is like an art work.

It is a skinny 24-floor building flanked by giant blocks of residences.  There are 281 owned apartments and the majority have been sold to Brazilians and Russians, presumably enticed by the shopping…  Once upon a time there was a Sheraton here, owned by Starwood.  Starwood’s  head honcho Americas Serge Rivera pushed through its replacement by this mega-construction, owned by Starwood.

Here it sits, on reclaimed swamp land, looking at the Atlantic to the east and Bal Harbour shops (the site was once a prison) to the west. 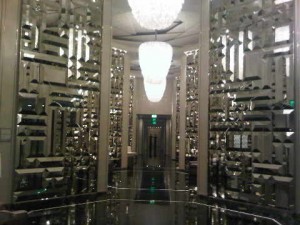 Inside the hotel, there is barely a straight wall in any of the high-ceiling public areas.  The main corridor is like origami of mirrors set vertically.  The designers, Yabu Pushelberg, those two talented guys from Toronto, must have used every bit of mirror in the western world.

There is an occasional sculpture here, a photographic collage of the Colosseum there.  In between silently flit lovely young employees, some of the 500 who staff what is only a 243-room hotel, the girls in chic grey outfits every bit as attractive as the Chanel mannequins across the road. 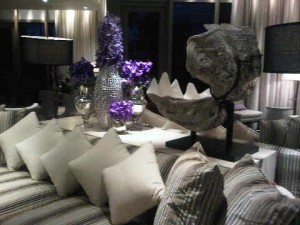 Even the flowers fit the overall super-luxury look (here, a Bar view)

Leading off this corrugated-shaped main corridor are rooms, an art gallery, the check in area, the wine cellar, the bar when a bottle of champagne is sabred at precisely 1930 every evening.  There is a breakfast room, Atlantico, and a fabulous Jean Georges Vongerichten restaurant, J&G Grill.

This is a diamond-shaped room, tall and grey, with one long curved wall entirely window, looking over the gardens and pool to the sea.   Overhead hang sturdy, two-foot diameter hemispherical lampshades, grey with gold interiors.  Food, all chosen by Vongerichten, is stylish rather than fine dining.

Signatures include a truffle pizza appetizer, and grilled salmon or catch of the day, or veal chop on the bone, for main.  An amuse tonight is a bowl with a bit of mozzarella foam, over which green pea soup is poured.  Nearly all the diners – and the 100-seat restaurant is full – are locals rather than hotel guests.  A waiter brings the house Bloody Mary, an Urban Sunrise, with keylime ice cubes. 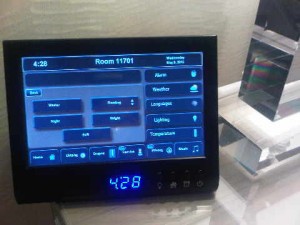 Simple-use PDA by the bedside

All the bedrooms have terraces, with furniture, looking out to sea.  All rooms are pale South African Movingue  wood with matching marble and comfortable seating.  Nothing grates.  I have the first PDA system I have ever found easy to work. Get into, say, Drapes, and you can still quickly get into Privacy, Lighting or whatever.  As with all St Regis, there are Remède toiletries, here with lots of bath things.

Here, unlike other St Regis, 1701 comes with a full kitchen, and clothes washer and drier.  Room 1701, like all the others, can only be accessed by the proximity keycard. At lobby level, press this against a pad, and the screen tells you which elevator to go to, and that elevator – without any buttons – takes you straight to, and only to, your floor. 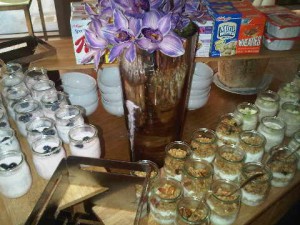 This is a hotel for lovers of luxury, and fitness. Run along the beach, when the light permits. At any time, night or day, there are two Technogyms, one with Kinesis and Pilates balls, the other with machines, including waves and spinning bikes.

The celebrity trainer, Tracie Wright Vlaun, offers Vinyasa-style yogo, namely body-sculpting.  Next time Tracie, will have to come back….  at breakfast, when Atlantico’s buffet is one of the prettiest in the scene a waiter says he wants to be a food writer.  We have a discussion. 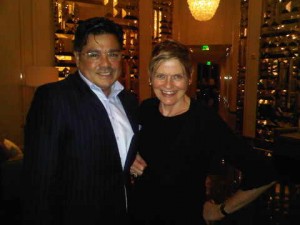 Marco Selva runs this new-look St Regis (oh so far removed from, but just as remarkable as, say, other St Regis hotels I have visited in New York, Osaka, Singapore and, within the last week, Abu Dhabi – and one always forgets London, The Lanesborough).. Selva wanted to be in the luxury business from teenage years.  He was studying in Westchester and saw so many luxury cars he promised himself he would be in that sector, somehow.

His big mentor is Ed Steiner, who was his restaurant boss in the good old days of Grand Bay, south of Miami… now, says Selva, he feels like a politician running for office.  As he moves throughout his hotel’s main floor, everyone of any importance comes up to talk to him, to congratulate him.   Could this be the first hotelier in the White House (no, sorry, forgot he was born in Nicaragua…).