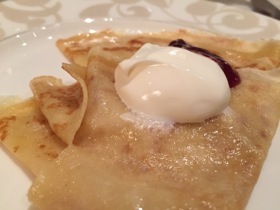 St Petersburg’s newest luxury hotel is the glorious and suitably palatial Four Seasons Hotel Lion Palace St Petersburg, which opened July 4th, 2013. The gal was just revelling in breakfast in the winter-garden central room – the glassed over central courtyard – when a young lady came up with a plate of blini, with sour cream and berry jam. You must have a Russian blini, she said. This was Maslenitsa time, celebrating the end of winter, eat as richly as you can before Lent. Notice the delicate ecru rim to the plate, by the way – it exactly matches the white marble tables’ ecru mats and napkins. Oh yes, this is style. 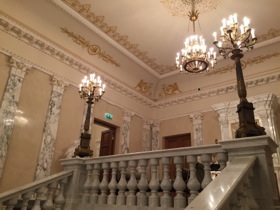 Looking up the grand staircase

The 183-room hotel has been over a decade in the making, since a young local man realised that an old palace, built in 1817 by Parisian architect Auguste de Montferrand for a Russian princess, would make a pretty nice hotel. He set his heart on Four Seasons (De Montferrand had, by the way, also designed St Isaac’s Cathedral, just across the road). I enter the building, going in between a guard of honour of two lifesize white marble lions. Ahead is a columned hall, its low barrel ceiling completely decorated with white moulding highlighted with real gold leaf. Carry on ahead and there is the grand staircase, 39 white stone steps that Pushkin, as well as countless Tsarist royalty, used. Look at the marble. Oh what an elegant place for a wedding! 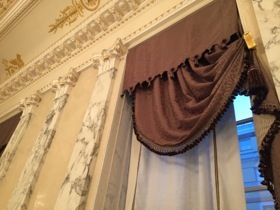 I think another thing that makes this hotel, which designer Cheryl Rowley has so respected throughout, outstanding is its blend of discretion and statement. Walls of most public areas and all bedrooms are simply cream, but look what she has done with the curtains. They swag or fall in a most emphatic way, and all the edges have repeating tassels at least three inches long. Where were they made? I ask. The Netherlands, but then there is a dour face. The Dutch seamstresses or their task masters were unable to hang them so a local Russian lady, with a couple of obvious strongmen, took over. The curtains in 125, the 1,700 sq ft Yusupov Suite, named for the nearby family palace where Rasputin was murdered, are teal and old gold stripes, and covetable, though they must weigh a ton. 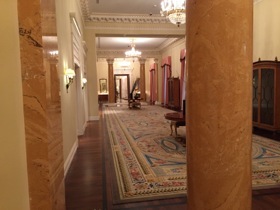 All the first floor (second floor, US style) ceilings are high, as was traditional in Tsarist households. This means that anyone lucky enough to be staying in 125, or one of its neighbours, has ceilings that soar at least 20 feet. Columns in the first floor corridor, which is wide enough to play badminton, are original. The carpets, all hand-knotted in England, are new, and beautiful. Yes, this really is a most gorgeous luxury hotel…