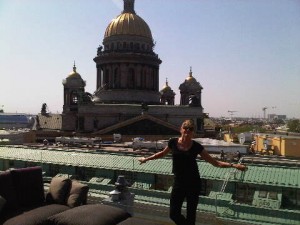 With a backdrop of St Isaac's Cathedral, this is the rooftop Terrace of W St Petersburg that opens tonight

Tonight, Saturday May 19th, 2012, lifestyle comes out in St Petersburg Russia.  This is the grand opening of the rooftop terrace on the eight-floor W St Petersburg, and the gal had a preview.

Up there in the glorious sunlight, she leaned against the glass retaining wall.  Behind her was the long-awaited, and sadly still awaited, Four Seasons Lion Palace St Petersburg (was it really going to launch a Fabergé brand at one time? – the name is now owned by the South African global mining giant Pallinghurst).

Behind that was the gilded dome of St Isaac’s Cathedral.  Now, for the next few months, the great and good of St Petersburg will wine and shine up there, showing off and having the same kind of looking-down-at-the-rest-of-the-world feeling that you experience in Moscow at 02, atop Ritz-Carlton Moscow. 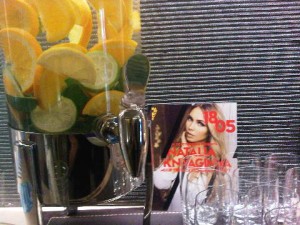 Flavoured water, and a suitably-fashionable poster, in the hotel lobby

Cocktails for this summer bar venue have been specially designed by a sommelier from Hotel Plaza-Athenée in Paris.  Try his Flower Bubble, a Martini glass filled with Veuve-Clicquot champagne and a table tennis ball-sized ice ball in which are frozen edible flowers.

Lifestyle up on the roof. There is lots of it already inside the 137-room luxury hotel.  Follow the flow of the lobby.  From the front door turn left to a sitting area with low-low bright-coloured sofas and chairs. The central wall is a dry aquarium, filled with heated acrylic fish  (by Jacopo Foggini)  suspended from the ceiling above.

Flow on around past the end wall – working fireplace, what looks like the entire library of Taschen art publishers, and a coffee stall – past front desk, with a backdrop of all-wall acrylic net (two layers, more Foggini) and on to the restaurants. 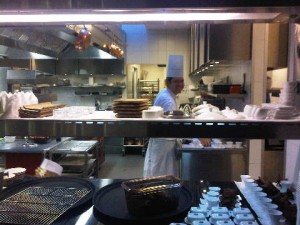 The entire food product here is Alain Ducasse, from the casual-fine dining to employee cafeteria (lucky them), and room service, too.  The main restaurant, MiX, is three-part.  The front section, by Voznesenskiy Street – looking across to the Four Seasons – is light-bright, the middle area has a glass wall formed of horizontal wine bottles, the rear part, dominated by a horizontally-bunched gold-plated net curtain that is in fact an Italian designer-chandelier, by Terzani Atlantis, looks into an open Molteni kitchen. 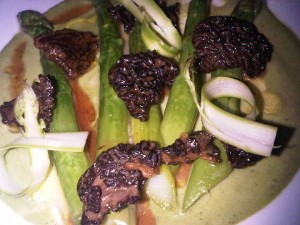 Alain Ducasse has put three of his own team in here, and you can be sure the food is good.  Asparagus looked pretty, tasted a delight and its additional sabayon was addictive. The English-language local paper, St Petersburg Times, raved about his organic chicken main course, cooked Pojarski style – ground, bound with cream and egg, breaded and fried in a manner popularized by Tsar Nicholas I’s chef.

Some dishes are marked in tribute to Ducasse’s eponymous restaurant in the Hotel Plaza-Athenée Paris, celebrating its 25th birthday this year.  Servers glide back and forth, the girls (everyone is a beauty here) in frocks specially designed in Lebanon. 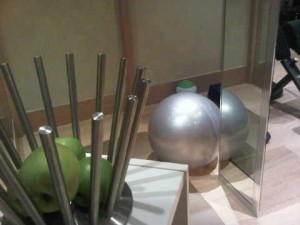 A silver ball in the gym

The boss of the whole hotel, Hungarian Peter Katusak-Huzsvar, takes personal pride in design everywhere.  Although Antonio Citterio – he who has done the Bulgari hotels in Milan, Bali and now, just opened, London – is the designer here (he was brought in by the owner, who had stayed in Bulgari Milan), Katusak-Huzsvar has added little touches, like the bowl of green apples in the gym. And the gym, by the way, stays open 24 hours, so you can jog the Citterio-designed Technogym treadmill after hitting the Flower Bubbles up on the roof. 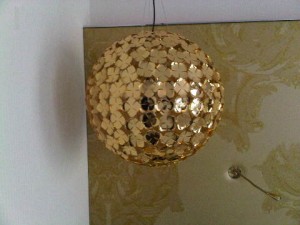 And a gold disco ball, a Terzani Orten'zia Very Very Gold, over the bed

Citterio’s bedroom designs have lifestyle elements not normally on the luxury travel circuit.  At the top of the wall above the windows is a full-width, 12-inch tall angled mirror, enabling you quite cleverly to see yourself when lying in bed.  Hanging over you is a disco ball, Terzani Orten’zia Very Very Gold.  Different.

Also different is the night turndown.  Forget chocolates.  You get a white mat by the bedside (marked Why Barefoot) and a kaleidoscope, neither of which should be taken home. 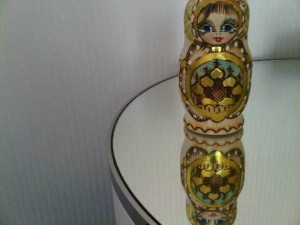 Petra, the Matryoshka doll, on a reflecting mirrored table

You get a post-it on the bathroom mirror, next to the in-mirror television, reminding you of a $200 fine if you smoke.  And, to take home, you get your own stylish ‘babushka’ doll. The technical name for a set of wooden dolls of decreasing size is actually a Matryoshka doll, apparently invented by a folk painter at Abramtsevo, Sergey Malyutin, in 1890 (wow, that was after the opening of Russia’s oldest luxury hotel, Grand Hotel Europe, vintage 1875).

Traditionally the outer layer is a woman in a sarafan, the long-shapeless traditional Russian peasant dress.  Figures inside can be identical, or even male…  Here all five figures are charmingly gold and duck-egg blue.  This Matryoskhka is hereby named Petra, for the city of its home, and it is a souvenir of that city’s youngest (as of now) luxury hotel.