What is a gal to do on St Patrick’s Day, March 17th – especially when she is surrounded by the fun-loving community at Dupont Circle in Washington DC?  Well, the ideal solution is obviously to stay in the Irish hotel,  the oh-what-a-surprise Dupont Circle Hotel, a treasure of the Doyle Collection.

The ideal garb for the entire day obviously has to be green.  This little emerald sparkly number has made one other appearance, on a sandbank off One&Only Reethi Rah in the Maldives.  Then-GM of that uber-luxury resort, Michael Luible, organized a small boat to take us out to a sandy islet that only appeared when the tide was out.

The exclusive assembled party drank one or two glasses of champagne, watched the sunset and then got back into the boat, quick, as the tide was covering the sandbank fast.

Everyone is wearing green around the Dupont Circle area

Today, in Washington DC, anything goes.  There are supposedly no more than 5,000 Irish diaspora here in the capital of the USA but I saw more than that – including Indians and Asians and even Scotsmen in kilts – sporting green tee-shirts, caps, anything.

A family of six, with four kids under, probably, six, walked by, every one in maximum green.  Irish Catholics? When I saw their faces they were more likely from Ecuador or Peru.  But it was all good natured.  The temperature soared to 78 degrees and it was too hot to get hyperactive.

Dupont Circle seems to be surrounded by Irish bars.  The noisiest is undoubtedly James Hoban’s, named for the architect of the White House (that little pad that I felt I almost ‘touched’, from the rooftop of the Hay-Adams).

Time for learning. James Hoban, 1758-1831, born in Co. Kilkenny, studied architecture in Dublin and won a Gold Medal for his drawings of stairs and roofs.  Bought a one-way ticket to the promised land, namely America, and took out an advertisement in the Pennsylvania Evening Herald offering his services.  On the advice of Freemason friends, moved to Charleston SC and designed an asylum. Awarded $500 to oversee and implement construction of the President’s House…

Talking of which, even the current President enjoyed St Patrick’s Day.  Obama graced the Dubliner Bar with his presence.  He just happened to run into his eighth cousin, who just happened to be visiting from the Emerald Isle.

Dupont Circle is not only Irish bars.  It is Starbuck’s, of course, and PNC Bank and embassies galore.  It is only four blocks west to Rock Creek, ideal for runners and bikers.  It is only a few Metro stops to anywhere.

Life is easy here (warning, what is NOT easy is buying a Metro ticket – the self-service kiosks are so complicated that even a PhD has problems but fortunately there is probably a highly-motivated local who will help you, for a dollar-bill tip).  Not being able to manage a ticket machine should be labeled a ‘disability’ and then the authorities will have to make it easier.

The new Americans with Disabilities Act ADA, coming into force May 15th, 2012, requires all hotels’ handicapped bedrooms to have massaging mattresses to wake up deaf people who cannot hear alarm clocks. And every hotel swimming pool, and jacuzzi, has to have a fixed hoist to swing you from wheel chair to water and back out again.  These hoists cost at least $4,000 a piece and surely take up more room than the jacuzzi itself…..

Take my word for it, there really IS a grey squirrel atop the junction of the tree's branches (it eats an orange nut, oblivious to the festivities around)

Washington is beautiful right now.   The weather is perfect. The city is so clean – residents here try, at least, to put drinks containers in trash bins, even if they are not cleared often enough (soon there will be no rivals to claim England’s most-trash-littered-countryside ignominious banner).  Oblivious to the green festivities, a squirrel sits on a tree in front of a small garden on P Street, and eats a nut.

The cherry blossom is out, aplenty and early.  This is the centenary of Washington’s famous cherry blossom.  It is extraordinarily lucky any are here.  In 1905 Eliza Ruhamah Scidmore returned from Japan and suggested having cherry trees.

Amanda Hyndman in front of one of her flowering cherry trees, Mandarin Oriental Washington

The Japanese consul to New York City got involved.  The city of Tokyo sent some trees but the US Department of Agriculture, on the advice of President Taft, BURNED them. Another 3,020 trees were sent by the patient Japanese, and on March 27th, 1912, the first were planted by Mrs Taft and Viscountess Chinda, wife of the Japanese Ambassador.

Now, every year, the Cherry Blossom Festival attracts, well, millions.  Amanda Hyndman (Mandy Scott), GM of Mandarin Oriental Washington (another luxury hotel on a level of its American siblings in Boston, New York and San Francisco and now Atlanta GA) has several cherry trees on her lovely terrace – divine place for a luxury wedding, by the way.

This year they have white flowers, sometimes they are pink… this year she has a descendent of Viscountess Chinda come to stay at some point. 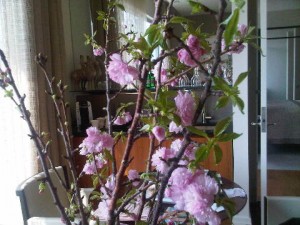 Cherry blossom on a table in room 901, Dupont Circle Hotel

Room 901 at the 327-room Dupont Circle Hotel, part of Global Hotel Alliance, has really pink cherry blossoms.  What a lovely welcome!  Look left, through and all-glass wall, down to Dupont Circle. Look up right to Washington Cathedral, now fund-raising for millions following damage in the August 23rd, 2011, earthquake.

This is indeed a surprise hotel, practical luxury, with everything that a busy person wants, from easy-switches and free, hotel-wide WiFi, and a deep bath tub with bath salts and television at the end.

The minibar has been filled with me in mind, and I have a full martini-making kit.  What is more, ninth floor guests have an all-day, help-yourself buffet, small but well thought out, and an intelligent library. The gym is 24 hours (no pool or Jacuzzi so no hoists to worry about!).

After checking nearly every restaurant in town, GM Scott Dawson decided that what Washington needed was a really authentic French brasserie and Café Dupont, with chef Silvan Kramer in charge, is just that.  The gal finishes St Patrick’s Day not with Irish stew but with baguette-in a paper bag, a rocket salad with goat cheese and orange slices, and an enormous urn of moules marinière and frites in a paper cone.  What a day to remember…