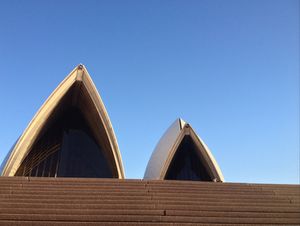 Right, dearly beloveds, it is time for a quiz.  The gal is only giving two clues. They are all to do with luxury hotels, in one way or another.  That is the first clue. The next gives the game away. They are all in Sydney.  Yes, this first shot, that looks like something out of the Atacama Desert, is two of the Opera House’s cones as they appear when you run up the 72 steps that take you up from ground level.  Since the adjacent Botanic Garden does not open until seven a.m., you can get a really good work-out by running up and down the Opera House steps ten times. 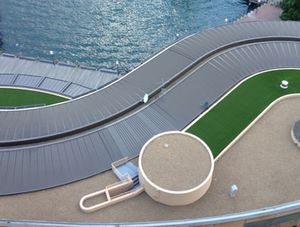 Look down at the Park Hyatt

There are other places to run outside, of course.  Another of my favourites is over the Harbour Bridge to Milson Point and the closest hotel to start this run is Shangri-La Sydney.  There are so many runners and walkers up there from daybreak – many are commuting to work, their necessities held in tightly-fixed backpacks. A couple of dayglo-coated Security guys make you feel comfortable. Halfway over the bridge I look down, to the top of Park Hyatt Sydney, the hotel that weaves around Campbell Cove to Dawes Point. 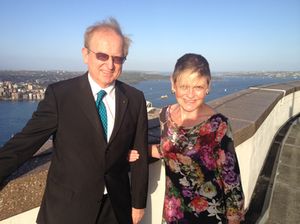 On top of the – Sydney – world, says Franz Donhauser

The best overall view of this area is from the rooftop of Shangri-La Sydney, because you have a 38th floor view through 360 degrees (the hotel has 36 floors and then you take service stairs up through two further floors). Shangri-La GM Franz Donhauser showed us where 150 lucky guests had enjoyed the three lots of New Year’s Eve fireworks, at nine, 10.30 and midnight.  He also showed us the exact spot where Prince Harry had looked down, October 2013, at the ceremonies commemorating 100 years of the Australian Navy.  Today, in the photo, you might just be able to spot the Opera House in the background. 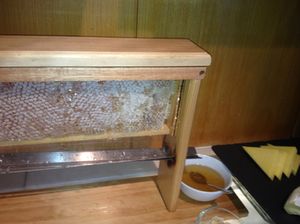 An instrument of torture (or a honeycomb?)

Shangri-La Sydney, originally opened as an ANA, is a very functional building in a very Japanese way, and also lots of fun. Altitude, on the 36th floor, is full nearly every night, with the anniversarian crowd, and those who feel romantic and want this amazing view. Celebrities may be put by their agents into other hotels which give them free rooms but, given the chance, those celebs will escape to dine at Altitude. George Clooney did that, for a start. Those lucky enough to be staying here have another of Sydney’s marvellous club lounges. As at Four Seasons Hotel Sydney and InterContinental Hotel Sydney, you have stunning views, and such helpful staff you want to wrap’em up to take home.  Next picture is a detail of the Shangri-La’s breakfast buffet. 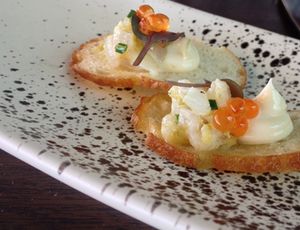 The InterCon has done a clever thing.  If one of the concierges gets you a lunch or dinner reservation at stated outside restaurants, your meal starts with complimentary canapés ‘presented with the InterContinental Sydney’s compliments’.  This is absolutely win-win. You get free canapés, the restaurant has the business and feels good, and the hotel reaches out to guests it wants to attract.  I was actually lunching at Café Sydney, on the rooftop of Sydney’s historic Customs House.  You sit up there, on the fifth floor terrace, in a stunning glass and metal conservatory embellished with the names of other great ports, including Toronto and Vila.  The restaurant is run by Martin Alles (he made his name with The Peak Café in Hong Kong). The lovely concierges at InterContinental Hotel Sydney had got me a reservation, that morning, for 12 noon.  As we turned up, the receptionist had to tell another party sorry, full house, and, sure enough, by 1230, every seat was taken. 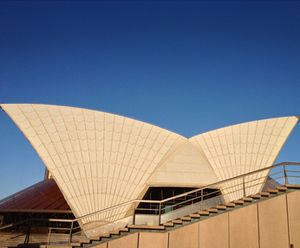 Final view of the Opera House

So there we sat, with the idyllic view across Circular Quay to the Opera House, for a final look before leaving town.  There was no room, or time, for dessert, so I did not get a chance to see if Café Sydney is serving some of the ‘Aussie summer icecreams’ that are currently in vogue.  In Canberra, you can try bacon icecream at Frugii, in Fremantle there is fish and chips ice cream with real batter at Kailis Fish Market Café, and in Brisbane vegemite icecream at Gelateria Cremona. Which luxury hotels would dare put those on their menus, I wonder?