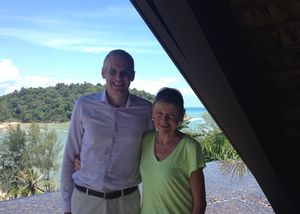 The gal posed two questions to Andy Kunz, a man of the world who, after Swiss national service and flirting with aviation and law, decided on luxury hotels. First, appropriately since he is currently in charge of Anantara Phuket Layan Resort & Spa, why Phuket? There are, after all, so many destinations, like Chiang Rai, Chiang Mai and Koh Samui here in Thailand, as well as competition from the Maldives, Mauritius and the Seychelles and countless others. He talked about the growing number of airlines flying direct to Phuket. There are direct Emirates flights from Dubai, and Etihad starts service from Abu Dhabi this October. 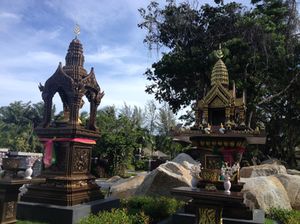 Sacred shrines, or mini temples, by the resort entrance

And Etihad brings its partners’ business, including from Jet Airways and, now Alitalia (fortunately this resort has a great Italian chef, of which more anon). From Hong Kong there are three one-stop flights a day, with China Southern or Malaysian. From Europe, fly into Bangkok and immediately, without going through main immigration, transfer to domestic for very easy, no-waiting domestic immigration, oh so simple. That begins to answer the question ‘why Phuket?’ And this is Thailand’s biggest island, all of 222 square miles total, although the fact that it is reckoned that 21 percent of the 600,000 population are European retirees is a definite put-off. 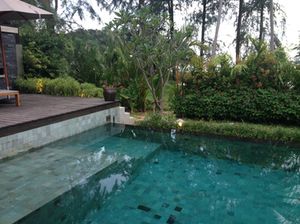 There is nothing old about the brand new Anantara Phuket Layan Resort & Spa, which was finallycompleted only this June, when it opened its lovely Anantara Spa. Yes, there had been something called Bundarika here on this quiet Layan beach site, part of Sirinith National Park on the west of the island, but then Bill Heinecke came in – yes, that same Flashman type, whom George McDonald Fraser would surely make into his hero of the 21st century, he who rescued the Rani Resorts that I saw in Mozambique a couple of months ago, and whom I met personally again in the VIP lounge at Male only a couple of weeks ago – here, Bill Heinecke came in, bought the entire 14 acre property and set to work, or rather set his talented people to work. 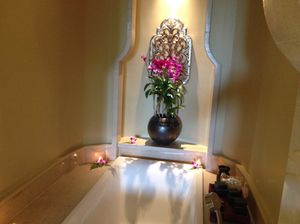 The lure of both Phuket and the Anantara name is already attracting business from all over. At breakfast I run into a friend from Dubai, here for a holiday. I comment on a table tennis table set up on a yoga platform. A small group of Chinese here last week wanted to play pingpong – one of them, or rather two of them, also got married, on the beach. I wonder why they did not use the wedding chapel? This is one of the world’s best, on a par with the inverted-V glass structure of Conrad Bali, and the protruding glass box of Anantara Bali Uluwa, or, indoors, the soaring golden ship-shape at Grand Hyatt Tokyo. 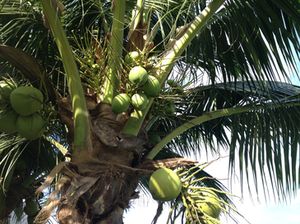 Here the wedding chapel is also an inverted-V, but wood, open tront end, cantilevered out, about 300 feet up a steep mountain. In the wedding chapel for a ceremony, look out past a lighted firebowl, across an inches-deep decorative pool, over the void and down to the beach and sea. I am reminded of paragliding down to Six Senses Zighy Bay in Oman’s Musandam Peninsula, but I digress…. I sit on the terrace of Beach Villa 11, a 300 sq ft-total private space with bedroom (bed-wide desk, with instant wifi, acts as bedhead) and, a separate structure, my salon with Smeg fridge and separate wine cooler, and a 25-ft pool. I look through banana-tree fencing and casuarina trees, to a rivulet to my left and, facing ahead, to the west, to the ocean. 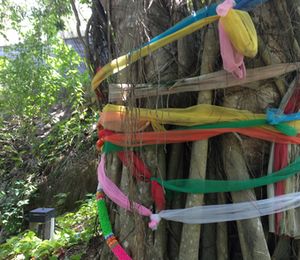 Spirit tree, to preserve the magic

It is all so peaceful – no powerboats allowed here, thank goodness. I head up towards the wedding chapel again. I pass ‘spirit trees’, lucky trees recognisable by the coloured shawls tied around them. I have a one-to-one yoga session on a platform under trees, birds chirping as I practise breathing exercises. Next comes a sensational Thai massage. The therapist wears silvery-grey silk, gaucho-style culottes and a matching overshirt. I have forgotten the outside world. Oh, by the way, what was the other question for the guy who runs this luxury hotel? Wait for tomorrow.