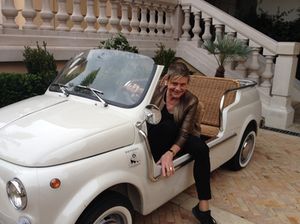 This column is dedicated to the memory of Odile Firmin-Guion, who so embodied passion for luxury hotels. The gal first met her when she oversaw public relations and communications for The Columbus Hotel in Monte Carlo.  Odile somehow skilfully managed to control two strong personalities, Ken McCulloch, part-owner of the hotel, and Robert Cook, who was General Manager. She succeeded in conducting an orchestra that included another strong player, race driver David Coulthard. Odile Firmin-Guion moved on, and now it is fast forward to December 2013, and she was even more passionate about Hotel Metropole Monte Carlo, where management plays together. 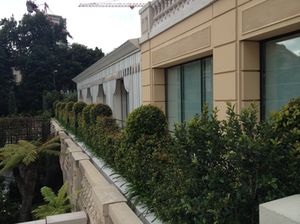 From outside, the Karl Lagerfeld tent appears as an extension of the wall

Odile would be happy to see how some of the innovations she promoted so lovingly, like the hotel’s Odyssey courtesy car, are so appreciated. The Odyssey Fiat is part of the packaging of Karl Lagerfeld’s tent.  Whereas at Sofitel SO in Singapore he has designed a stylised Singapore lion shape as the hotel’s logo, here in Monaco he has designed – a tent.  Let us get the story right.  The 146-room hotel has an outdoor pool.  That should surely be all right, year long, or at least for Scandinavians. But the hotel’s owners cleverly realised that partnering with Karl Lagerfeld and investing in a tent would not only make the pool year-round but also bring yet more publicity to this Leading hotel. 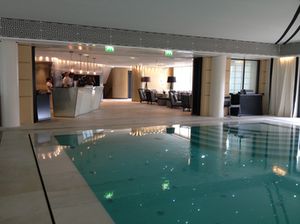 Inside, look across the pool to the kitchen

The tent, which envelops the entire pool area and more, takes two weeks to take down, during summer (it is stored in Italy), and two weeks to put back up.  Once erected, the interior has a low, black-outlined white cathedral roof.  This whole area is called Odyssey, and it also encompasses a Mediterranean restaurant.

In front of the frieze are poolside tables, with black and white chairs, and table settings – look across the pool to the open kitchen. Odyssey is a private club, accessible only to hotel guests. One long wall of the tent is taken up by 18 side-by-side panels, each seven feet high. 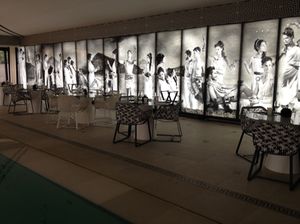 They tell the story, in deliberately smudged black on white photos, of Mapplethorpe-type Adonis males retelling Le Voyage d’Ulysse, and Karl Lagerfeld has signed the bottom of the right-hand panel. Hotel Metropole likes big names. The interiors of the 146-room hotel were turned, a decade ago, into a theatre, by Jacques Garcia, who is master of that genre – think especially of Hotel Costes, Paris, and of the Selman in Marrakech (the one that has a separate Garcia-designed ‘hotel’, complete with walk-in shower, for the Selman horses). There are big names in the form of fitness at Hotel Metropole Monte Carlo, namely ESPA, and in fashion retail, in the multi-level Metropole Shopping Center below the hotel – its 80 boutiques include Hugo Boss, Kenzo, Red Valentino, Sephora, Vilebrequin, plus art galleries and restaurants. 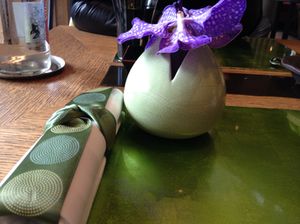 Ah, eating and drinking.  Why leave the hotel itself?  The lobby lounge, set across the rear of the main lobby, is like a mediaeval library, with divinely private sitting areas. People sit all day and evening long here.  To the right is the Michelin two-starred Joël Robuchon Monte-Carlo Restaurant, which is run by chef Christophe Cussac and well-known local pastry chef Patrick Mesiano.  Come back out of the hotel, turn left and, in a separate two-floor building, you have another treat, YOSHI by Robuchon, which has one Michelin star (this one is designed by Didier Gomez and it has a delightful calming Japanese garden at the rear). Takéo Yamasaki is the star chef here. 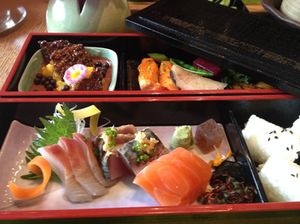 Joël Robuchon is known for his attention to detail, and his creativity.  Best-seller, particularly at lunch-time, is YOSHI’s bento box. For €29 you design your own. Choose sashimi or California avocado rolls, then perhaps Shake no teriyaki, grilled salmon, or yakitori, and a dessert (perhaps Okinawa, chocolate mousse with mango bits).  Only a week ago Odile Firmin-Guion was in animated laughter as she ate her YOSHI lunch, in the luxury hotel into which she put so much passion.