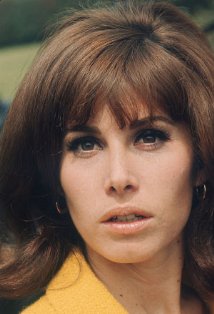 After all those wild animals at the phenomenal Shambala Private Game Reserve, it is amazing to arrive back in a city – Johannesburg – to find a photo in one’s bedroom of one of the greatest animal lovers of today, Stefanie Powers.

The gal first came across her, by hearsay so to speak, at the luxury resort that is Mount Kenya Safari Club north of Nairobi, on the lower slopes of Mount Kenya.  She was a close friend of Bill Holden, one of the founders of the club, and many of the ‘boys’ who have worked longtime at the club, which is now Fairmont, talk about the couple in ‘the good old days’.

After his death in 1981 she became President of the William Holden Wildlife Foundation and she still works with the Atlanta and Cincinnati zoos. Stefanie Powers is best known to the general public, however, for her role as Jennifer Hart in the television series Hart to Hart.

What a great life she is having. Her mother was Polish, she was born in Hollywood and she was at school with Nancy Sinatra.  Her last professional appearance was in I’m a Celebrity… Get Me Out of Here! in 2011. 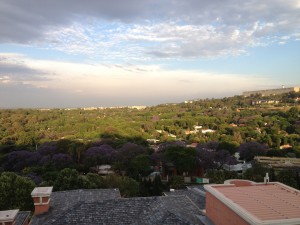 View from the Stefanie Powers Suite, The Westcliff, Johannesburg

But thanks to a photo of her in room 424 at The Westcliff in Johannesburg’s Westcliff area, lots of people – or at least one a night – look at her admiringly.  Room 424 at the hotel is named in her honour.  Actually did I say ‘hotel’?

This is more like a village that is themed partly for olde England, partly for an Italian hilltop town, with more than a hint of Amanresort or typical Orient-Express about it. US travel agents love it, and so do their traditional travellers, as well as all those who adore Orient-Express, which actually manages it.

And, for dining, local Johannesburg society of all ages just adores the hotel, and its Polo Bar and La Belle Terrasse and Heidelberg chef Klaus Beckmann’s thoughtful cooking. 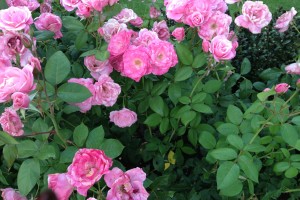 Flowers abound around The Westcliff

This pink gem of a hotel, with white wedding-cake highlighting, sprawls as a series of houses set up a steep and winding cobblestone road.  Houses in all have 120 rooms, the lucky ones looking far down past Johannesburg Zoo to the Lutyens Transvaal war memorial and, in the distance, the Magaliesberg mountains.

At various points between the houses there are immaculately tended English gardens, ideal for weddings.  This is the society hotel of Johannesburg.  At 17:45 tonight about 20 men in full black-tie tuxedos, and one or two in white tie and tails, were in the Polo Bar, and I in my workout clothes, going round the Bar to get down to the gym (24-hour, Technogym) felt, well, slightly out of place, but we all joked.

South Africa in general is very friendly.  You feel good here.  The staff, who have been here for ever, treat you as a long lost friend – I certainly have new friends in Christian and Trevor who have been helping me get used to the devil that is a new iPhone, when you are away from your office and with no instructions… 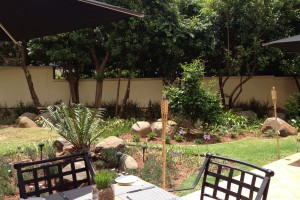 A garden terrace outside the Hilton Sandton’s restaurant

It seems everyone working in a luxury hotel in South Africa wants you to feel at home. Across town, the top Sandton hotel for CEOs of the world coming to do business is the Hilton Sandton on Rivonia Road.  Interestingly it was built in 1995 by the then-Malaysian government, opened first by Mahathir himself and then, somewhat quirkily, opened two years later by Prince Charles.

It has a mammoth conference and meetings area, but it has other things that the discerning business traveller wants.   The executive lounge on the sixth, top, floor, for instance, even has oh-so-welcome copies of the Financial Times – while picking mine up I heard two businessmen, in full suits (day-time not tuxes) and ties, discussing investment in Angola, or should they think of Nigeria? 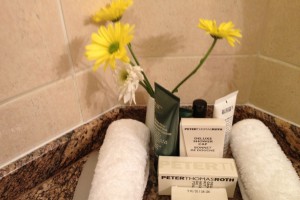 The global ceo wants a room with all the basics, adaptors, plenty of lighting, obvious security and a satisfactory bathroom – honestly, turning to Peter Thomas Roth products was one of the best decisions someone at Hilton made, his bodywash is just divine.  Put a little flower by the set-up and you know someone, in this case a maid, cares.

Hilton also has ballpoint pens that really write, and they last more than five minutes.   But business travellers want more than this.  They need a good workout and Hilton’s boss of all Africa and the Indian Ocean promises not only a new gym but a significant spa. Right now, the best workout is lots of lengths in the lovely curvilinear outdoor pool. 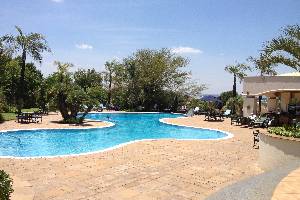 You can also dine outdoors, by the way, on the terrace of the all-purpose restaurant that also has an evening Japanese corner, with sashimi, sushi and teppanyaki, and, day-long, indoor buffets and à la carte.

The chef, a smiling young Malaysian, came out to see what we would like. We went for his caprese, a two-tiered affair with absolutely delicious local mozzarella, and then salads from the buffet with French fries that I swear he had peeled and twice-fried himself.

Oh dear, what would Nathalie at Bodyism think?  Sorry Nathalie, but I do use your leg band daily and honestly, in the most business-like of luxury hotels everyone has, from time to time, to let their hair down (even if they have not got enough even to warrant a comb, let alone a hairdryer).