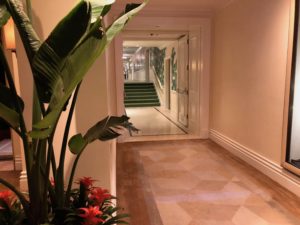 Looking through to palm-tree wallpaper corridors

Beverly Hills Hotel is, says the gal, unending fun.  Of course cognoscenti go there for its history, the corridors lined with the signature big-palm wallpaper put in by architect Paul Revere Williams, 1894-1980, who expanded and reconceptualised the 1912 building in 1949.  The palm design, although copied far too widely, is actually patented by the hotel, which, says Manager Christoph Moje, agrees limited edition partnerships.  See the Linus bike above.  As soon as a sample was displayed, the hotel’s inhouse store sold out, immediately.  This is, by the way, one of the most extraordinary shops in any luxury hotel. 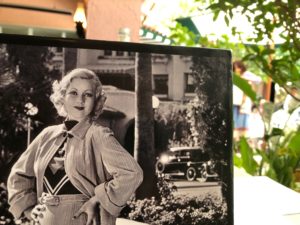 Want to buy a skate board or a pair of silk pyjamas, both featuring the palm design?  Hurry, or buy online.  I particularly coveted the Koio sneakers – Christoph Moje wears a pair at weekends and says people are always commenting.  But there is much else that is fun here.  Take the Polo Lounge, where some locals must eat several times a week.  They know the servers and the servers know them (Moje says turnover is almost nil as the people working here feel so much part of a family that is carefully nurtured by Dorchester Collection’s regional director, Ed Mady, current HOTELS Magazine’s hotelier of the world).  I loved the way the menu is a single sheet attached to a card showing Ann Sothern 1909-2001, born Harriet Lake in Valley City ND – at the age of 78 she finally got an Oscar nomination for the 1987 movie The Whales of August. 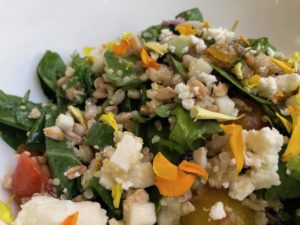 I had had the Polo Lounge’s signature McCarthy salad before.  This time I went for the West Hollywood salad, primarily because its 14 listed ingredients may warrant a mention in the Guinness Book of World Records.  Yes, I did have quinoa, farro, kale, spinach, mizuna, garbanzo beans, heart of palm, cucumber, tomatoes, golden raisins, currants, feta, sunflower seeds, and preserved lemon vinaigrette. And, yet another sign of true luxury, when I asked for a spoon I was brought, on a linen-covered plate, a choice of three different shapes and sizes. 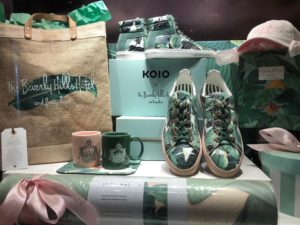 More souvenirs, ALL so desirable

A table near us had chosen desserts, which were carried out personally by pastry chef Brooke Martin, who looks as though she lives on air – she is a marathon runner, apparently. The dessert menu shows Marlene Dietrich, complete with long gloves and cigarette, at the hotel in the 1940s. The two dessert takers, both adults, had chosen Hollywood Romance, a six-layer of chocolate fudge cake representing the fact that Elizabeth Taylor spent six of her eight honeymoons here, and Marilyn’s ice cream sundae, with mint chip ice cream, hot fudge and sour cherries, the whole topped by two large balls of pink candy floss supposedly representing her breasts.  See what I mean about what a fun luxury hotel this is? SEE THIS SHOP VIDEO