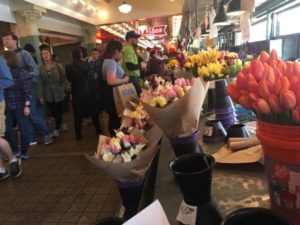 Arriving in Seattle is so easy, if you fly in from Vancouver. US immigration is done at Vancouver International Airport so the flight is domestic, which saves so much time. On arrival, there are clear signs for the 12-minute walk to the Link, the light railway that takes you right downtown (closest stop for main hotels is University Street, $3, 35-minutes). Before heading to the luxury hotel world it is tempting to take a ten minutes’ walk to Pike Place Market, celebrating its 110th birthday this year – see images above, and to the left. it was opened by the then-Mayor, Charles Hiram Burnett Jr, on August 17th, 1907, which was declared Public Market Day. Today, run by the Pike Place Market Preservation and Development Authority PDA, the market rents out tables for a really low annual fee – the last record the gal can find is $35 per table, per year. 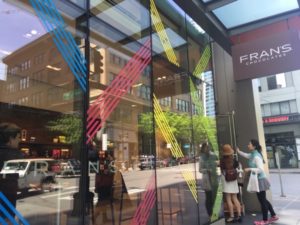 As well as the fresh produce and hand-made crafts at the market, there is a plethora of coffee bars, craft beer places and chowder stands in the vicinity. I was really hungry, found a kiosk selling what they call tempura seafood, which turned out to be more like deep-fried but still, who cares? I walked around eating bites of baby shrimp from a paper bag, my hands getting more and more greasy. No, I did not explore the chocolate shops, although I immediately felt at home seeing a Fran’s. Fran Bigelow has been making chocolates for decades, and her philanthropic side includes supporting such charities as Safe Crossings and the YWCA. There is a Fran’s at Four Seasons Hotel Seattle. 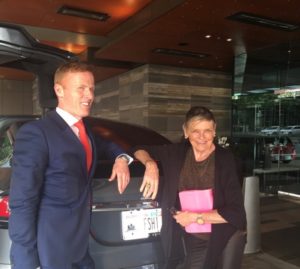 This is a superb hotel that appeals not only to the area’s top tech names but to local executives from, say, Boeing and Starbucks. Arrive on a weekend and you will, as if boarding a luxury cruise ship, be offered a cocktail. In your room, you have an espresso maker but there is also a coffee concierge who will bring whatever you want, quickly. At night time, a lobby sleep station has eye masks and other aides. Want a house car? Aha, says the hotel’s still-very-British GM, Michael Pedder, look what we have for you, no, not the traditional Bentley, or BMW or Mercedes, but a 4×4 Tesla, number plate FSH1. Similarly, since my last visit this luxury hotel’s food scene has done an out-with-the-old and in-with-the-new. Today, the all-day restaurant, which is technically more of a tavern, is Goldfinch, a partnership with one of Seattle’s biggest food names, Ethan Stowell, whose books range from Italian to Seattle specials. 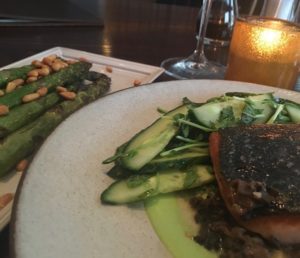 And, as any tavern should, Goldfinch has bare wood tables, and a simple menu offering easily- understood good-looking dishes with great taste – my dinner was the house salad, with parmesan and olive oil croutons, and a big chunk of Alaskan King salmon, with pea purée, and there was simply no room to go on to Talisker Single Malt icecream, served by the three-scoops.