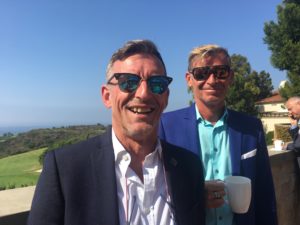 The great and good of the luxury hotel world, and those of independent character, convened at The Resort at Pelican Hill in Newport Beach CA, October 11-13, 2017, for an impact-filled and fun global meeting of Small Luxury Hotels of the World SLH. The event stood out for so many reasons. It was entirely apolitical, with no clique-iness or hierarchy, and it was truly international – the gal met top hoteliers from the Cook Islands and Kenya, for instance. The top people, who included Forbes Travel Guide’s charismatic Jerry Inzerillo (above, on right, with Small Luxury Hotels of the World’s equally energetic CEO Filip Boyen), and, another significant personality, Virtuoso Chairman Matthew Upchurch – supported by his colleague Albert Herrera – stayed throughout the whole event. 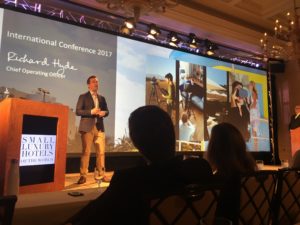 It always helps, of course, when the weather cooperates. The sun shone throughout, and every break was held outside on a terrace. This was soak-up-the-rays paradise. I do not know what the very few spouses did during the three days of business but, despite the distractions of the locale, the nearly-200 delegates flooded back into the meeting room for a business programme that was more than worthwhile – it was electrifying. Under its current ownership and leadership, Small Luxury Hotels has re-imagined itself as ‘independently minded’, showing that the 520 hotel members, typical size 49 rooms, can take on the biggies and offer what today’s luxury travellers really want. Small and personal is the key message, as stressed by the marketing boss, Tim Davis. 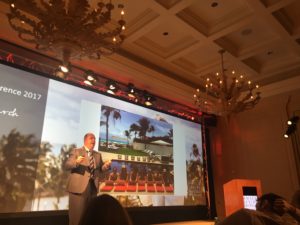 Delightfully-French President of the International Advisory Board Jérôme Tourbier, of Les Sources de Caudalie, was first speaker, showing how change means increasing distribution support for members, who are integrating more and more into their communities. Filip Boyen said he wants at least one quality hotel in all key destinations, and so far this year 78% of bookings have come via travel advisors, which was music to the ears of the king of that genre, Matthew Upchurch – when it was his turn for the podium, he repeated one of his many current messages, namely that technology is all very well but it is human connection that makes the luxury difference. There is no way, said Tim Davis, that SLH can hope to match the $4.3 billion advertising spend of Priceline this year, but SLH is brave, as evidenced by its superb quality, advertising-free new 16-page newspaper, The Independent Mind (current articles include tips on packing and what it is like to be a SLH mystery shopper). 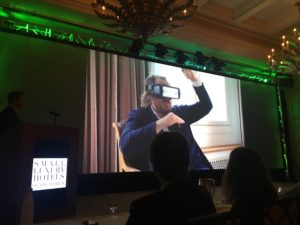 But, and this is vital, technology can and must be used to advantage. Virtual reality VR can already give guests an enhanced preview of what they might experience. Richard Wiegmann, who heads Sabre for Europe, Africa and Middle East, looked forward to robots replacing some hotel functions, particularly relevant to the entire hotel industry when there is awareness that the young have not inherited a passion for a lifetime of, say, delivering room service. This feature coincides with what Skift President Carolyn Kremins said, namely that, as consumer guests, the HENRYs, High Earners Not Rich Yet, want to splurge on a good life that follows restaurateur Danny Meyer’s belief that today’s guests walk around with invisible signs that say ‘make me feel important’. And, by the way, that is exactly how I felt at the luxury Pelican Bay resort that was my home for three nights – see a tour of bungalow 422, below. The Precor gym does not open until seven but every morning at 5.30 I called Hospitality Services, got an immediate response, by name, and no problem, the facility was open by the time I had hiked up there, ten minutes later. SEE BUNGALOW 422, BELOW