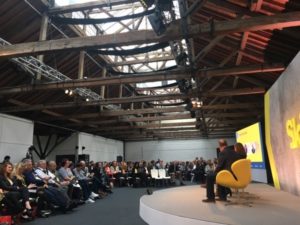 View of the forum room

There was no health or wellness in the action-packed day that Skift so marvellously organised in London, Tuesday April 4th, 2017 (scroll down to yesterday’s story). Restaurants, however, were important – and everyone associated with luxury hotels and resorts should take note. One panel included Ben Liebmann, COO and Partner of Noma & Overture Holdings. Everyone involved in the hotel sector should take food more seriously he said (food is vitally important for millennials, who care about what they ate where). He described Noma’s next popup restaurant, in La Playa, Mexico, where 90 Noma culinarians and servers will decamp temporarily from their Copenhagen base. Tickets of course sold out in days, with 90% of the fortunate purchasers flying into Mexico specially. Getting the message out is a challenge, but Whalar’s Co-Founder and CEO Neil Waller described how its structure allows such an entity as Dubai Tourism to be in touch with specific influencers whose message is put out through a multitude of social media to reach millions at a mere cost of 6¢ per engagement. It did seem that luxury is forever moving. 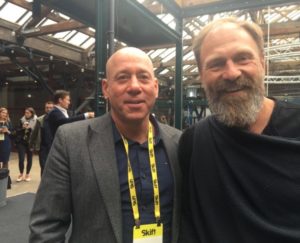 Another riveting speaker was the bearded, shawl-wrapped Claus Sendlinger, founder of Design Hotels (and being 75% owned by Marriott is highly advantageous for his business, he admitted). The Burning Man movement has awakened the need for individualism and he believes there will be gatherings of travellers with similar ideologies – he now lives on Ibiza at the first Design farm, La Granja, selling bedrooms to those who want to be temporary friends of farmers.  Throughout the Forum, by the way, the Chinese effect came up continually. Skyscanner co-founder/ceo Gareth Williams said they are the leaders, and will be the first to move on from credit cards to the next stage of payment. On customer service, surprisingly he said successful Chinese companies think first about the customer, and, next, how can this lead to more money? The Chinese are getting used to fantastic service, and right now. No wait for them. Although artificial intelligence AI and the big-tech-picture were the goals of the Skift team, it was two young Asian speakers who stood out. Shanghai-based Troy Liu discovered airmiles and free travel when at UCLA. in California: back home, 3 years ago he started Mileslife, now a partner of Europe’s massive Miles & More, offering entry to hotels, restaurants and other travel sectors worldwide 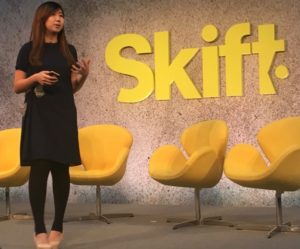 Acacia Leroy was a solo act

And, almost at the end of the action-packed day, Acacia Leroy, undoubtedly on her way to be a top leader either in her native Indonesia or her chosen base, Singapore (now Asia Pacific Trend Strategist for TrendWatching, she has an impressive background, from philanthropy in education with Mission: We Care! through to studies at the University of London and the National University of Singapore, plus a three-month stint with Ogilvy & Mather). Here at Skift, she cavorted on stilt-like shoes as she pointed out that whereas no-one in the audience admitted they would wait 12 minutes for their Uber vehicle to arrive, so the hospitality world has to be quick, to take advantage of the anticipated $422bn annual spend by Chinese travelling overseas in 2020. Her secrets? Get into the life-streaming economy as soon as you can, be aware of the need for a good deal, and think differently, say by MyBump, when it comes to communication. I am just so sorry I had not been able to take part in the pre-Forum evening cocktail, at London’s City Hall, and I could not stay for the postcript cocktail. But my day, from 8.45am until 5.30 p.m., never had a really weak moment. Well done Skift, and Rafat Ali and his super team. For those interested, the next Skift Forum is in New York, September 26-27, 2017 www.skift.com