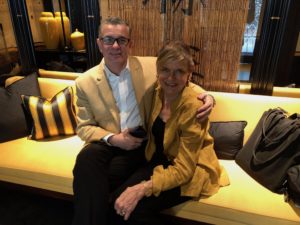 Think Six Senses and at the beginning Robinson Crusoe might have come to mind, but then the company moved on, and the opening of two rural villages catapulted it into the top rung of worthwhile and sustainable luxury, wherever. Now run by CEO Neil Jacobs with ongoing support from Bernhard Bohenberger, President from the start, Six Senses showed it could do a Chinese village with working smallholding, outside Chengdu, and a wine estate, in Portugal’s scenic Douro Valley.  Now it has added another rung to the top of the ladder by going urban. Six Senses Duxton, Singapore, opened April 18th, 2018.  South African GM, Murray Aitken had been given precisely three months, to the day, to get it ready. 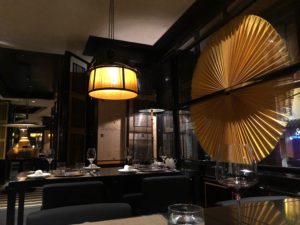 View along the restaurant

This 49-room hotel, a Chinese Baroque conversion of the Berjaya Hotel which had apparently once been an opium den, has another feature that is a first for Six Senses.  It has a Celebrity Designer, Anouska Hempel (born in Wellington).  For the first time I feel Six Senses bows to designer rather than design simply being part of a property’s charm.  The entire three-floor building’s interiors are black and soft mustard (coincidentally Murray Aitken and I unintentionally dressed for the part in the photo here).  I love the way the long ground floor, formed of terraced shop-houses built in 1856 in what was then a nutmeg plantation, goes on and on, with some alcoves holding great polysyllabic books, another a giant singing bell that can be rung for you at any time (see a video below). 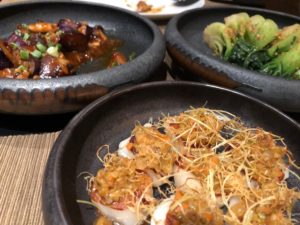 I loved the way walls in my room were, like those throughout the building, papered, above-dado, with metre-square copies of an 1865 Entitlement deed (apparently the hotel’s owner, Satinder Garcha, has a whole collection of originals of such deeds). Yes, you really do feel you are in Chinatown here and I took a couple of fascinating walks, seeing how little restaurants slot in side by side with such gentrified neighbours as Cru-Cycle spinning, and yoga parlours. The hotel has a long terrace running along its entire front façade. Sit there, overlooking activity on Duxton Road, and perhaps even borrow a Tokyobike for exercise (sibling Six Senses Maxwell opens a few yards away this October – it will have a gym and spa but until then Six Senses Duxton has an arrangement with a freestanding gym). 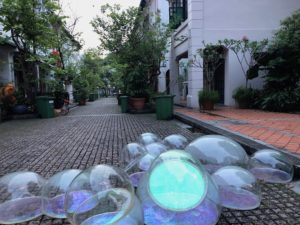 Dining at this luxury hotel is a delight.  Wood tables all seem to be set in semi-private alcoves, and places are set with chopsticks plus black Fontessa cutlery, and Playground ceramic dishes. We had sharing plates, fried lion’s mane mushrooms with avocado purée, crispy pork cheek with bonito aioli and miso herbs, and, both wok-seared, Hokkaido scallops and organic grass-fed tenderloin with Himalayan salt.  At breakfast I could have had a Chinese omelette three eggs with crab, or perhaps a dim sum basket, or a range of congees, but I went healthy western, choosing magnificent avocado and grainy wholewheat toast with cilantro.  As I left, singing bell still resounding in both ears, I realised that Six Senses can do urban hotels as well as its original away-from-civilisation resorts. Now I cannot wait to see how New York turns out. SEE VIDEOS OF SINGING BELLS, WALKING IN CHINA TOWN, AND ROOM 7