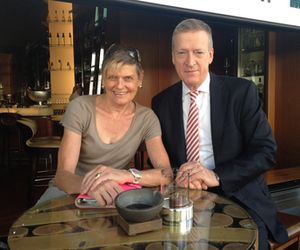 There is nothing quite like sitting out on the pavement, or sidewalk, and that is what savvy Zurich people do when the weather allows. Bankers and haute-couture shoppers know that the daily aperitivo at one of the city’s top luxury hotels, Park Hyatt Zurich, is where they can meet their friends (the aperitivo is officially only 5.30 to seven, says the gal, but they actually gather for hours, especially Thursday nights, in reality the end of their week as come Friday they like to join the traffic jams heading out of town for the gorgeous mountainsides). If the weather precludes outside drinking, the inside bar is fun too, with its ceiling-high rows of bottles. 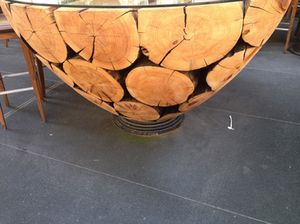 .. at one of the hotel’s stunning Korean tables

But if you can be outside, on Beethovenstrasse, you might well be leaning against one of these amazing tables. Each of the four here is a different shape. They are all by Korean artist Jaehvo Lee – I see that even a small, low table is being quoted on artsy.net at $30,000. He has a massive piece in the main restaurant at W Seoul Walkerhill. Once you know him, you know him. He is recognizable for burnt-black bits of wood interspersed with fresh wood, the whole then cut into a final shape. One critic says ‘his wood-on-wood combinations read as playful meditations on the multifaceted nature of wood itself’. 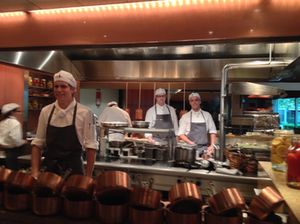 The kitchen brigade is ready..

Jan Peter van der Ree has recently arrived in Zurich, and as well as running this youthful 142-room hotel he heads Hyatt for the whole of Switzerland, the whole of Italy, the whole of Netherlands and all Morocco.   I am jolly lucky that he is here tonight. We go into the Parkhuis restaurant, past the kitchen – no wood shapes here, merely working items. The brigade smiles as we go in. In fact we go in, and walk straight through the restaurant and out again, back on to Beethovenstrasse. It is one of those rare balmy summer evenings and we prefer to dine outside, protected from passers by and the occasional roar of young bloods showing off on their Harleys by a four-foot high hedge. 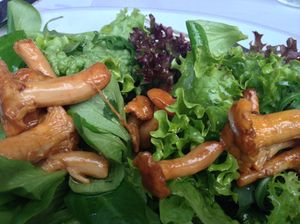 .. to produce, say, a chanterelle salad

I love the menu as you basically choose your own protein, salad, starch, vegetables and so on, and all items are listed not only with national provenance but also the supplier. I start with lettuce salad, on which pickled chanterelles are spooned over. The greens are from Leuenberger, Switzerland, and the mushrooms come from Giovi, Serbia – this dish is available in two sizes (shown is the small size), and it is marked low-calorie. The hotel works with food scientist Marianne Botta Diener, and there are lots of heart-smart items available, say bison. 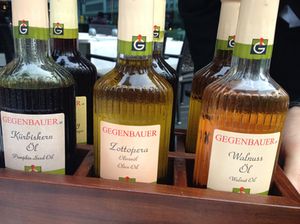 Choose your own oil

I ask for olive oil and am bought a tray of assorted oils and vinegars, all Gegenbauer, from the Viennese company started by Ignaz Gegenbauer back in 1929. Very famous name this, by the way. Leopold Gegenbauer, 1849-1903, was an Austrian algebrist who gave his name to Gegenbauer polynomials, if you are any the wiser. Because of the heat, we drink chilled Aureto 2012, a Shiraz from Provence that is owned by two Swiss, Werner and Carmen Wunderli, who named their winery for the area’s gentle Aureto breeze (I think of other Swiss-owned foreign wineries, including the Donald Hess wineries, in Barossa, Australia; Calchaqui Valley, Argentina; Healdsburg, Napa and Russian River, USA; Paarl Valley, South Africa…) 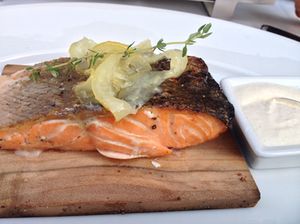 The signature is salmon cooked on cedar

One of the few dishes that has been on the menu since this luxury hotel opened in 2004 is salmon cooked at 400 degrees on cedar wood, and served with a lemon twist and horseradish cream. The salmon is Loch Fyne, Scotland. The cedar wood’s provenance is not listed, but it is as short-lived as the fish as it cannot be re-used. What a change this site has seen since the beginning of the century, by the way. There was a public carpark here. Now it is a six-floor sleek building surrounded by top banks and other financials: State Street financial centre is right in the building. There is also parking for 300 cars underground…. now it is time to look at the art, here.