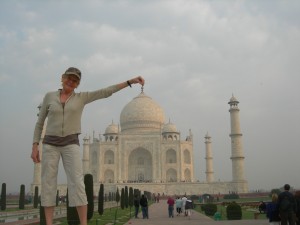 Oh boy, look what the gal is doing...

India is more than a country.  It should be a continent in its own right rather than a mere ‘sub’ continent.  It has unique features at every turn.

Where else can you not only stand next to the most beautiful mausoleum in the world, the Taj Mahal at Agra but, thanks to cunning placement by guides, stand in such a spot that you appear to be holding it up?

The gal does recommend, by the way, staying as close as possible to the Taj Mahal to be able to get in first thing, before the hordes of tourists, both domestic and foreign, arrive.

Oberoi’s luxury Amarviläs hotel is closest to the Taj: the new guy in charge there is Ankush Mahajan, who did such a brilliant job running the best river boat I have ever been on, the Zahra, plying the Nile between Luxor and Aswan. 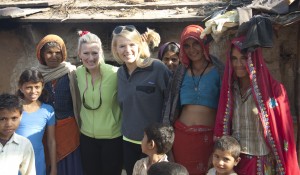 Mollie and Abbie Fitzgerald in India

By the way, avoid weekends at all costs.  Lines to get into the Taj Mahal then are likely to be 90-minutes-wait, or more.

On this last trip girlahead was city only.  This photo shows another intrepid traveller, Mollie Fitzgerald of Frontiers International Travel, out in the field, so to speak, with her daughter Abby.

Based in Wexford PA, Mollie is one of the most outward-thinking of top travel agents (and that says a lot).  Frontierstravel.com offers such combos as, for instance, a stay at the Waldorf Astoria Cavalieri in Rome followed by a Mediterranean cruise on Silver Spirit.  Top of the range, Mollie.

Ranjit Phillipose in front of 'his' project, Falaknuma Palace

The Cavalieri’s rooftop La Pergola is the only Michelin three-star restaurant in Italy run by a German, Heinz Beck, plus it has three real Tiepolos, and three swimming pools – the indoor one has a real working fire by it.

Back to India.  This last trip can be summed up in key words, in alphabetical order awe-inspiring, crazy, friendly, frustrating (getting the visa before, getting through traffic), generous, hospitable, monumental and unpredictable.

Expect the unexpected.  India’s heritage buildings are unique and those who look after them love bringing the past up to date.  Ranjit Phillipose stands proudly in front of Taj’s Falaknuma Palace that ‘he’ restored, with the help of hundreds of craftsmen and an unknown quantity of rupees. 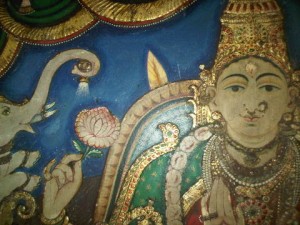 Ganesh, with his elephant's head, appears in much Indian art

Now it is time for him to move on.  He is swapping Hyderabad for the Maldives – he will be GM of Taj Exotica, doing a straight swap with Girish Sehgal, coming to take over from him at Falaknuma Palace.

India is its art. If only there were time to learn about Hindu beliefs.  Many times the women shown have amazing diamond-shaped eyes.  Sometimes you see Ganesh, with his elephant’s head, he who supposedly removes obstacles (what a good idea!).

He is also Lord of Beginnings and patron of arts and scientists and of letters.  One’s head reels… more rocking and rolling, as in Mumbai a couple of days ago. 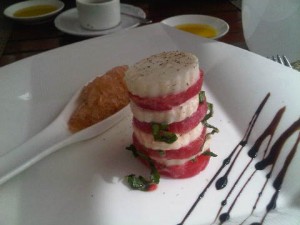 A caprese tower on San Gim terrace at The Imperial, Delhi

India is food, marvellous food.  Its own food styles vary from one mile to the next. Indian youngsters are also hot into Japanese food and all ages love Italian, as the whole world seems to.  The faithful caprese rears its head in a variety of forms.

You seldom get a totally clear view in India.  You are seeing the world, its world, through a fine gauze. But there is always colour.  Saris can be dayglo in their vivacity. There are flowers galore in luxury hotels.

And there are iconic views. On this last trip, views that that stand out are from the Royal Suite at Oberoi Gurgaon Delhi, and of course from the Tata Suite at Taj Mahal Palace, Mumbai. 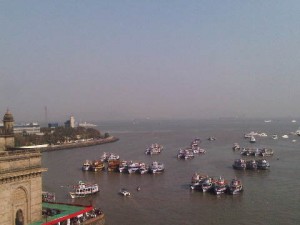 View down to Gateway to India from the Tata Suite, Taj Mahal Palace, Mumbai

That particular day, amazingly, the gauze had disappeared and it was crystal clear.  The gal cannot wait until her next visit to India.