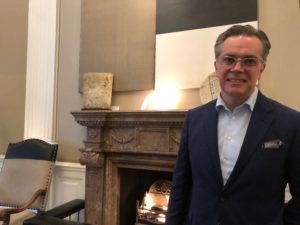 When Richard Cooke, then GM of Shangri-La Hotel Toronto, was at  home one day he answered his mobile to find it was someone who stayed with him whenever in town. Come and run my Edinburgh hotel, said the voice – and that is how, three years ago, the Brit came back across the Atlantic to be in charge of Edinburgh ‘New Town’s’ luxury hotel, The Balmoral.  It is in a commanding position, at the junction of North Bridge and Princes Street, directly above Edinburgh’s main rail station, Waverley, and looking west along Prince’s Gardens to the Castle, and east to Arthur’s Seat. The gal was in the Bothwell Suite, # 230, newly redecorated by Rocco Forte Hotels’ family designer, Olga Polizzi, it was a symphony of soft greys and blues with hints of heather-purple. It looked along to the castle, and also south, across the dip of railway lines, to what is known as Old Town. 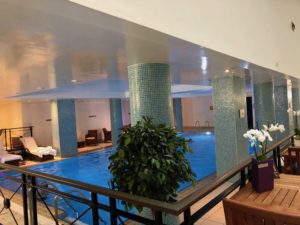 One of the cores of this hotel is the stunning pool, with adjacent ESPA that seemed to be equally popular with both hotel guests and locals. Another big draw is Palm Court, above, full every afternoon with mainly-female afternoon tea takers (two-hour slots, here). Overflows are seated in the very attractive mezzanine gallery looking down at the elegant lobby, with some of the male team members in tartan trews, the tartan from Kinloch Anderson – there is a tartan concierge here, Andy Fraser, ready to help you choose your own family-heritage pattern.  Arriving soon, in about two months, will be Alain Roux, son of The Waterside at Bray’s legendary Michel Roux, here to help you choose brasserie food, in a stunning space that I was privileged to tour, hard-hat style.  Brasserie designer is Martin Brudnizki. 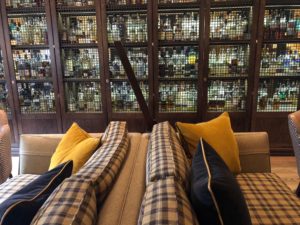 The bar has over 500 whiskies on display

And no-one should miss the bar, which has over 500 whiskies.  FIVE HUNDRED, how could anyone get through so many, even in a long life time?  Sadly here I was, on the final night of my whisky experience – and lo and behold, once again the whisky supremo chose the most local, which happened to be my second tasting of Glenkinchie, but this time in a tulip glass.  I also had a tutored lesson in the nectar, by the way (see a video, below). Dinner was here at Number One, where Brian Grigor’s Michelin-starred menu offers seven or ten courses. As always, I preferred simple, namely a starter of trio of bright green French asparagus lengths, served simply on a hazelnut purée and, for sauce lovers, a beurre blanc. 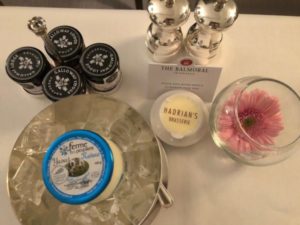 This was followed by a filleted Dover sole holding surf clams (and for this the wine man suggested a Pinot Noir from Chassagne-Montrachet, 2015 Ferdinand & Laurent Pilot).  After a good, though short, night’s sleep, breakfast arrived on the dot of 4.30 – look at what this luxury hotel produced, in the middle of most people’s night (yes, the yoghurt is Ferme des Peupliers yoghurt but the preserves aee Scottish, produced specially for The Balmoral by Isabella’s Preserves, named for its Aberdeen founder Isabella Massie). At 5.15, there was this suave gent in sunflower tie and matching lapel flower.  As he drove to the airport he regaled me with tales of a last week’s job, taking Bulgarian and Russian bankers around distilleries.  The loved the peaty whiskies on the Isle of Islay, he said. Put that on your list for next time. SEE MY SUITE – AND THEN ENJOY A WHISKY TUTORIAL