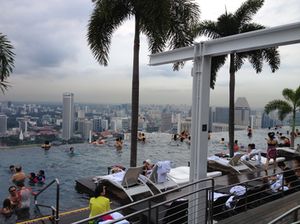 It is quite something being at the world’s highest-longest infinity pool before the sun comes up.  At that time you can swim.  Later in the day, as the photo shows, the pool on SkyPark, atop the luxury resort Marina Bay Sands, Singapore, is a hubbub of swimmers, loungers and photo-takers. The pool itself is 450 feet long, broken up into sections so the longest lap is probably 100 feet (its depth is around three feet so ideal for playing around).  More statistics, says the gal. SkyPark is in all 1,000 feet long, cantilevered 200 feet at one end, and the whole thing is 600 feet above the ground. You get amazing views from up here. 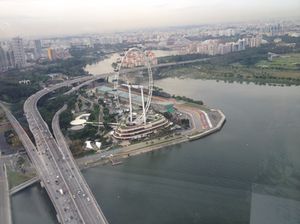 Look down at the Ferris wheel and the Grand Prix track

Look down in one direction, for instance, and you see Singapore’s Ferris wheel, the Singapore Flyer – the photo also shows part of the Grand Prix race track, which will next spring into action September 22nd, 2013. Only guests at the 2,561-room hotel can use the pool, but anyone can pay S$20 to come to the cantilevered viewing platform, which holds more than a thousand. So far, 2.6 million have paid for viewing platform tickets since it opened June 2010. Girlahead travel tip. If you want to swim, get up there early, before dawn, and sensibly you have bought a Club-access room as the lounge is also up there (on the 57th floor, which is SkyPark) as its breakfast is sensational, and not only for the view. 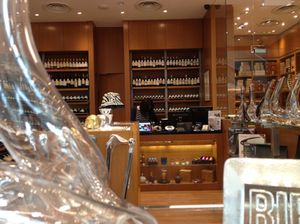 The Oaks Cellars has an amazing Riedel collection

I reckon I was the only person staying there who was not shopping, yes SHOPPING.  This is big time. There are over 300 shops, including a new three-floor Prada and a Louis Vuitton glass house that is semi-submerged in the waters of Marina Bay.  They are moving stores around so that highest-end men’s interest, say Breguet, Jaeger-LeCoultre and the like, are near the entrance to the casino. I was particularly impressed by The Oaks Cellars, which has the biggest selection of Riedel decanters – as shown – outside of Riedel headquarters in Kufstein, Austria.  Sadly I had to miss the opening night of Phantom Of The Opera, in the Mastercard theatre, and the Museum, and ice-skating…. 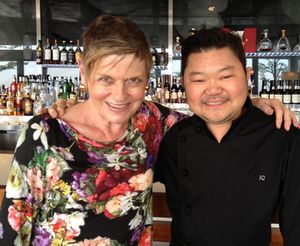 There was only time for eating – wow, how about the FOOD! Justin Quek, Singapore’s top ‘national chef’, runs Sky on 57, right up there on SkyPark. Breakfast on its terrace, lunch or dine there, for his food, JQ-labelled wines and the best views. Up here too is Ku De Ta, as in the Bali original started by Australian Arthur Chondros at the beginning of the century (doesn’t that sound odd!). Down in The Shoppes area, where all the retail is – and a skating rink which seems to have found its way in, too – you have, well, Daniel Boulud, Wolfgang Puck and Guy Savoy.  You also have a TWG Tea shop and tasting room, and a Din Tai Fung dim-sum-on-the-spot factory. 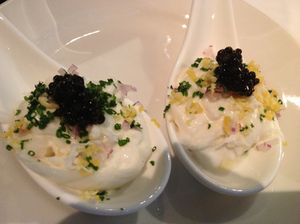 mozzarellaWe actually dined at Osteria Mozza, a magical ‘hole in the wall’ behind wooden shutters that open to reveal two adjacent places, the main restaurant and a pizzeria, both (with 110 seats each) packed by 7pm. Reserve ahead!  This is thoroughly addictive Italian food, Mario Batali’s genius.  His chef David Almany sent out little mozzarella, onion and caviar amuse, and I then went on to his mozzarella platter – there is an entire Mozzarella section of the menu (it reminds me why Bulgari creative guy Silvio Ursini is so clever to be doing Obiká mozzarella bars in many airports, and Grand Hyatt Tokyo).  My mozzarella platter had plain mozzarella from Apulia, mozzarella drizzled with olive oil, and home-made burrata, all with olive-oil infused toasted ciabatta, sheer bliss (follow this, as I did, with a whole seabream filled with fresh herbs…) 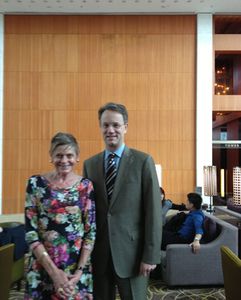 Interestingly, despite its size, everything in this gigantic operation, which employs around 10,000 and runs, on the hotel side, at 99 percent occupancy, not only works but is personalized. He who somehow controls the whole thing is George Tanasijevich, a charming Chicago guy who could well be running lifestyle coaching in combating stress. He, like his colleagues, never seems rushed or perturbed.  It is as if he is GM of one of the world’s top luxury hotels, which is actually what he is, though obviously the hotel side does not make quite the same money that the casino does – yes, there are private planes to ferry in the highest rollers, here called VIPs.  But everyone is treated like a VIP. Last week David Beckham was in town, for a charity event.  The next time George Tanasijevich was photographed was with another guest, who, admittedly a little to her surprise, felt beautifully VIPed and special throughout her stay.