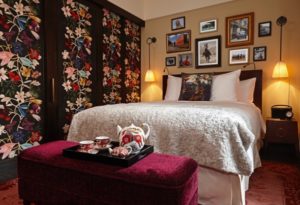 There are those who like Jacques Garcia’s designs, in which case they will approve of what he has done at the Grand InterContinental Bordeaux and, as shown here, at Hotel Vagabond in Singapore. But everyone will applaud at what Hotel Vagabond’s owners, Satinder Garcha and his wife Harpreet Bedi, who is also GM, have done otherwise. They have just funded a windfarm in Hebei, offsetting 650 tonnes of carbon dioxide for the next two years – this is now Singapore’s first carbon-neutral hotel.  This is also the hotel that has an incredibly valuable collection of art, belonging to the Garchas and it also has a resident artist, currently English student Edwin Fung, with whom guests can have tea every Thursday afternoon.  Add to that the opportunity to have breakfast any day up to August 17th, 2017, with a travel blogger called Hannah Gliksten (what does one say, over congee or porridge, to an erudite young lady who has come down from Oxford?). And, in addition, on Friday August 18th, 2017, Hotel Vagabond hosts a dinner enlivened by a comedy quartet.  It does seem that Hotel Vagabond, which links into the extensive Marriott network, is a 41-roomer with a tremendous amount going on.