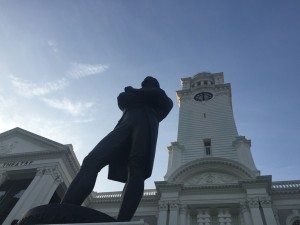 There are so many memories of Singapore and its luxury hotels, and no single picture better encapsulates the complementary ancient and modern than the view, above and below, of The South Beach (vintage 2015, architect Norman Foster) from the rooftop pool of Raffles (vintage 1887, for the Sarkies brothers). This is the hotel that was named for Sir Stamford Raffles, 1781-1826 – a statue of him stands in Empress Place, with Victoria Theatre and Concert Hall behind. What an amazing man he was, founder of Singapore, heavily involved in the Napoleonic Wars, author of The History of Java and so much more. The gal is fascinated to learn he was born on a ship off Jamaica, went to boarding school and at 14 started working as a clerk for the British East India Company. Interestingly, when he died in London, at 45, the vicar of St Mary’s Hendon, whose family had made money in the Jamaican slave trade, refused him burial because of his anti-slavery stance – he was subsequently re-buried there in the 1920s. Oh the challenges of life at that time: Raffles‘ first wife died young and only one of his four children, by his second wife, survived him. 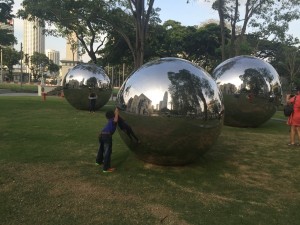 First-time visitors to Singapore often take a hop-on, hop-off bus tour, which is a jolly good way of seeing as much of the island-state as possible in a relatively short time. Personally I enjoy a good early-morning run, before it gets too hot. Uptown, my preference is for the Botanic Gardens. Downtown I used to run along Marina Reservoir parallel to Republic Avenue but the authorities have done so much land reclamation and building that the nature of that route has now become punctuated by urban construction. Today, I take a run, instead, around the Padang and Singapore Cricket Club. In the park at the far end, by Fullerton Road, large silver balls provide endless amusement for lively kids. 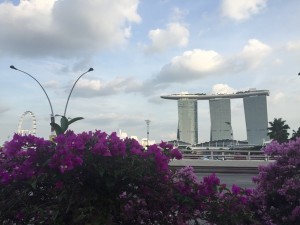 Looking across at Marina Bay Sands

Coming back past the Fullerton Hotel and along Esplanade Drive, I can look across the Bay to Marina Bay Sands. Some say it is an eyesore, but then they could say the same about London‘s Shard, Burj Al Arab in Dubai and Sydney Opera House – question, when does an eyesore evolve into a city icon along the lines of London‘s Big Ben and Tower Bridge, and the Eiffel Tower in Paris? Certainly the idea of making a giant E and setting it up on its legs, as here with Marina Bay Sands, is outrageous, but distinctive. It is the logo of Singapore, and every city needs one: Manila, Melbourne and Miami, take note. 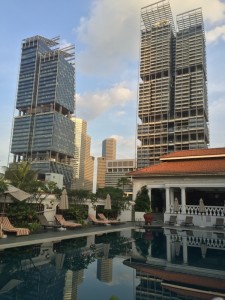 Looking across Raffles’ rooftop pool at The South Beach

As well as the new, in Singapore, there is notable integration with the old. The South Beach, for instance, incorporates many buildings of the former military complex that has been on its Beach Road site for nearly a century. What used to be the army drill hall, put up in 1933 by architect Frank Dorrington Ward, is now an unusual and splendid ballroom, with LED lights by the thousands hanging down from its hemispherical roof, above the ultimate plush carpet – this is indeed a suitable ballroom for a highly unusual luxury hotel. Another hotel nearby, InterContinental Singapore, incorporates some of the city’s traditional shop-houses into its overall design. Similarly, Sofitel So Singapore is a conversion of the 1927 TAS Building, later the Ogilvy Centre, and so on…